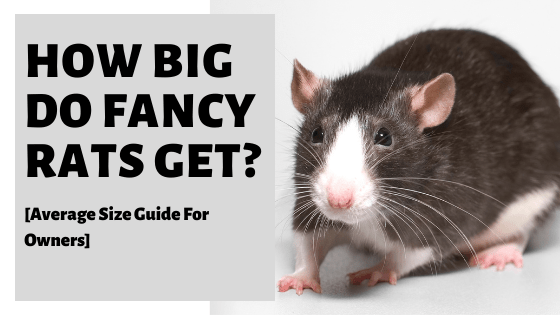 Are you looking at the Fancy rat breed and considering ownership? Not sure how big they get and want this information before perhaps proceeding? You’ve come to the right place. Today, we’re going to be taking a look at all things size when it comes to the breed. By the end, you’ll have all the information you need.

At least compared to hamsters, mice, gerbils, and degus.

They are smaller than guinea pigs, though!

Let us now explore their size and growth patterns in much further detail so you know precisely what you would be dealing with if you do ultimately decide to get one as a pet.

Interestingly enough, the answer is both yes and no. As things stand, Fancy Rats are bigger than normal rats. Theoretically and according to the research available, if normal rats were able to live as long as Fancy Rats, they may very well end up being the same size.

Fancy Rats live between two and four years, whereas normal rats have a lifespan of less than a year.

Fancy Rats live longer because they are protected in captivity, so they are able to reach their full size of 11 to 12 inches, excluding the tail.

By the time normal rats die, they are generally between 9 and 10 inches long, excluding the tail.

They essentially do not get the chance to grow as big!

A Fancy Rat also has bigger ears, a longer tail, and sharper facial features than a normal rat.

In addition, Fancy Rats have been domesticated for years and have a totally different lifestyle to wild rats.

They eat different food, and their exercise is limited.

As they have a steady supply of food and water, they end up having a more robust build.

They are not as streamlined and lean as normal rats, who have to fight for their food and as such do not eat as much.

Normal rats puff up their fur when they are in danger to appear larger.

It stands to reason that when we have the misfortune to come across a normal rat, they look just as big as Fancy Rats as they have puffed up their fur in response to the perceived threat of our presence.

The extensive breeding of Fancy Rats has led not only to size differences but color as well.

Most normal rats are brown.

Fancy rats have dozens of color variations, from black to cinnamon to beige.

Breeders have exacerbated certain unusual physical characteristics which have appeared owing to mutations or recessive genes.

For example, the Dumbo rat has large ears, and the Manx rat has no tail.

How Long Does It Take A Fancy Rat To Grow To Full Size?

If you find that your Fancy Rat is still growing after this, it could indicate a problem, and it’s best to contact a vet.

When rats are born, they are less than 2 inches long and weigh no more than a small coin.

They start to open their eyes after 2 weeks and are fully weaned by 6 weeks.

They grow quickly, on average 1 inch per month for the first 3 months.

Their growth slows after that until they are fully grown.

You need to differentiate between the concepts of “fully grown,” “fully mature,” and “sexually mature,” though.

It’s important to know the difference, especially when you have more than one rat.

It’s never ideal buying a couple of rats and finding out a few months down the line that one of them has a few more on the way.

Fancy Rats will be fully mature in 4 to 6 months, despite the fact that they are not yet fully grown.

Sexual maturity in female rats may occur as early as 5 weeks of age whilst males reach sexual maturity a bit later at around 10 or 12 weeks.

The question that follows from the above is this: how do you know how old your Fancy Rat is?

The only way to know for sure is if you have bought your rat from a reputable breeder.

If not, the easiest way to judge age is to look at the size of your rat and the color of its teeth.

We already know that a fully grown male Fancy Rat is more or less 20 inches (+-50cm) long, nose to tail. The bigger they are, the older they are – it’s as simple as that.

But for the teeth.

Well, you need to inspect them.

When inspecting your rat’s teeth (if they let you and you’re brave enough, that is), the yellow tint is a clear indication of age.

All rat’s teeth have a slight yellow tinge, but the older they get, the more pronounced it is.

Sometimes they even turn slightly orange.

If their teeth are bright yellow or orange, they are more than a year old.

The size of your rat and how many you buy should dictate the amount of space you need to give them.

A general rule when housing rodent pets is “the bigger, the better.”

The more room you give your rats, the more they will be able to exercise and play.

Get your rat a nice big cage with plenty of mentally stimulating toys, and you are much more likely to have a happy, lively, and sprightly pet.

When your rats are fully grown, make sure they maintain their size and weight.

Even domesticated Fancy Rats will eat anything and everything.

It’s important that you monitor their diet and stick to measuring out their daily rations – don’t get lazy and try to eyeball it; otherwise, they can become overweight and depressed.

Weigh your rat weekly, and if they are putting on weight, you need to figure out why.

It could be anything from too much food to a serious illness.

However, if your rat grows to the size of a small cat, you may be wondering whether your Fancy Rat is indeed a Fancy Rat or whether you have unknowingly become the (lucky? Unlucky?) owner of a Gambian Pouched Rat.

It’s one of the biggest rats in the world and is illegal to own in North America.

It can happen, which is why purchasing from a reputable breeder is always advised!

If you do the calculations in respect of cage size, where it needs to be housed, space outside the cage for your rats to play, and/or space for a pen, you may find that you just don’t have enough space for a Fancy Rat or two.

Never fear – your desires of facilitating a rodent residence replete with ravenous rats are not yet dashed.

You can always buy a dwarf rat.

They live longer and are about the same size as an adult gerbil.

They can fit in the palm of your hand and naturally need far less space than a fully grown adult Fancy Rat.

Now that you know just how big Fancy Rats can grow, you can evaluate your options. Even compare their size to Dumbo rats for instance.

Is a Fancy Rat a suitable pet for you?

Are you a suitable parent for a Fancy Rat?

If in doubt, it may be a good idea to talk to your local vet.

He or she can advise you on the nitty-gritty of general care and housing.

One thing is for certain – if you do decide on a Fancy Rat, you won’t be disappointed!