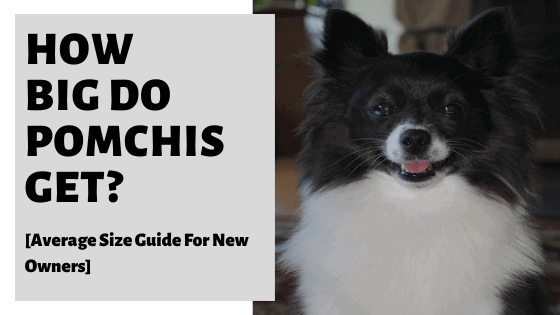 Being a cross between a Chihuahua and a Pomeranian, you wouldn’t expect a Pomchi to get too big. But what kind of size do they reach exactly? I spent some time researching the breed standard and analyzing the data reported from owners to find out. I’ll be sharing my findings, along with other insightful aspects of their growth, with you here today.

So, how big do Pomchis get? A Pomchi can range from 5 pounds to 12 pounds and is between 5 and 9 inches tall. Teacup Pomchis are on the smaller end of the scale, but even at its biggest, the Pomchi is still a small dog. Because they are so tiny, they are quite fragile, and their bones can break easily.

They are also known by a number of other names such as Chiapoms, Pomhuahuas, Chipoms, and Chiranians, by the way.

So if you see these names referenced – It’s the same dog.

And despite all these names, as a relatively new breed, not much is known about them.

So it certainly makes size and other aspects of this breed a lot less understood.

But, they were bred specifically for companionship and so do possess a range of desirable traits.

With size being one of them, they are in many ways ideal for those who live in apartments or small living spaces.

But there’s a lot more to it. So Let’s take a look at various aspects of their size.

What Is The Average Size Of A Pomchi

There is no average size for a Pomchi, except to say that they are small. There is a very slight difference in size between the males and the females, males being slightly larger.

As you can see, there is quite a bit of overlap between the weight and height of the males and females.

A range of 4 inches in height and 6 pounds in weight may seem very little, but when looking at the size of a small dog, especially those that are teacup size, 1 pound is a significant difference.

If you are going to adopt a Pomchi, be aware that they may be slightly bigger or slightly smaller than you were expecting.

Pomchis are classed as “toy-sized” dogs.

A Toy dog is one that weighs less than 15 pounds when fully mature.

A Pomchi fits easily in this category as both the Pomeranian and Chihuahua are pure breeds classified as Toy dogs.

The fact that there is no average size for a Pomchi is not only as a result of it being a new mix.

The variations in the weight and height of its parents result in even larger swings in the size of their offspring.

A Pomeranian can weigh anything between 3 and 7 pounds and stand between 6 and 7 inches. The ideal weight for a Chihuahua is less than 6 pounds and height, 6 to 9 inches.

But as you can see, even if there is variance, a Pomchi is never likely to get very big.

At least compared to other breeds of dog!

At What Age Is A Pomchi Fully Grown?

Pomchis are considered fully mature by the time they are 2 years old. They look fully grown when they hit 10 to 12 months, but they are still maturing.

On average, the lifespan of a Pomchi is between 12 and 15 years, but some have been known to live upwards of 18.

This is a much longer lifespan than most other breeds.

Pomeranians, on average, live for around 9 years, and Chihuahuas, 7 to 12 years. The Pomchi has inherited the best genes of both parents.

Mixed breeds do generally live longer than purebred dogs as they often avoid diseases and conditions created by overbreeding.

How well you take care of your dog will play a large role in how long it lives. If you look after your Pomchi properly, it could live up to 18 years and perhaps beyond.

The maturity phases of a Pomeranian most closely match what you can expect from your Pomchi.

They are considered new-born up to 6 weeks old, which is when weaning ends.

By 10 months, they already have most of their adult coat and are almost fully grown. They are puppies until they reach 1 year old.

Between 1 and 2, they may be described as teenagers.

Contrary to popular belief, one dog year does not always equal 7 human years.

Larger dogs can sometimes only have their first heat at 2 years.

Despite reaching sexual maturity, Pomchis should not be bred before they are at least 14 months old.

What Do Pomchis Look Like Once They Are Fully Grown?

Adult Pomchis have a face that is most often described as fox-like. They have furry ears which stand upright, short legs, a long torso, and rounded paws. Most Pomchis look like a small version of a Pomeranian, but their faces look more like Chihuahuas (small round heads with large eyes).

A Pomchi’s short, strong legs and muscular hindquarters are inherited from the Chihuahua. Their ears will be small and pointed, irrespective of which breed is more dominant.

As with all mixes, the finer details of their appearance depends on which parent they take after.

Their similarity to a fox is a result of their Pomeranian heritage.

If your Pomchi has a fluffy, curled tail, it indicates a high level of Pomeranian genetics.

Their coat also depends on how much Pomeranian they have inherited.

If your Pomchi has a Chihuahua parent with a long coat, then its coat will probably be a long, single coat.

Similarly, if the Chihuahua is short-haired, the Pomchi will have a short, single coat. Pomeranian heritage will give your Pomchi a double coat that is thick and fluffy.

Be careful if you are choosing your Pomchi puppy based on its looks. A puppy will change quite a lot as it develops and, as an adult, can look very different from its puppy self.

You may end up with a Pomchi that looks more like a Chihuahua than you initially imagined.

Irrespective of whether your Pomchi is more Pom or Chi, their colors remain fairly consistent.

The most common color for a Pomchi is light brown, but Pomchis are found in many shades of brown, from dark brown through to cream.

You do find black Pomchis, but these are very uncommon.

What Factors Influence A Pomchi’s Size?

A Pomchis size is influenced by genetics as well as environmental factors – including how they are bred and the diet they are fed.

Regarding genetics, the size of Chihuahuas and Pomeranians are almost the same. This does make it a little easier to provide an average size for the breed.

But this is certainly a range.

Poms are generally 7 to 9 inches tall and roughly 3 to 7 pounds.

As you can see, there is not much to choose between them.

Pomeranians are very fluffy dogs, so your Pomchi may look bigger or heavier if they inherit the Pom coat.

Diet will influence the size of your Pomchi.

Just 1 pound in either direction results in a noticeable size change.

Pomchis gain weight easily, just like Pomeranians and Chihuahuas. It is also very easy to overfeed them, causing obesity.

They don’t need a lot of food as they are small dogs – half a cup of dry food per day should suffice. It is best to buy food specifically designed for small dogs and to stick to dry food.

Dry food is better for their teeth as they tend to suffer from dental problems. It can be tempting to give them wet food as they can be very fussy eaters.

However, it is best to try a range of dry food until you find one that your Pomchi likes. Wet food is high in sugar and cereals, so it is not only bad for their teeth but their overall health.

If you do buy from a breeder, ask them what food they are using and the quantity. Whatever you choose, make sure that you buy a food that has a high protein content.

Some breeders will intentionally breed “teacup,” “miniature,” or “toy” Pomchis.

This is not a separate breed of dog, just the name given to dogs that weigh less than 3 pounds. Breeders can intentionally breed teacup Pomchis, but the methods they use are questionable.

This, unfortunately, exacerbates birth defects or medical conditions which have caused them to become runts of the litter in the first place.

How To Ensure That Your Pomchi Reaches Their Full Size Potential

You need to give your Pomchi the best care possible while they are growing. A Pomchi reaches full size when they are between 10 months and a year old. Vaccinations, feeding, and environment are all key things that you need to pay attention to when you have a pet, especially one that is as small as a Pomchi.

If a puppy is undernourished, it will not grow to full size.

Similarly, if they are overfed, then they can develop severe health problems and may not make it to adulthood at all.

Very small dogs tend to have what is known as conformational problems.

This means that they do not develop properly during gestation, leading to major health issues.

Pomeranians and Chihuahuas both suffer from a number of medical issues.

Epilepsy, diabetes, heart, eye, and dental problems are all common to both breeds.

They have passed down many of these diseases to the Pomchi, and some of these can impact their final size.

While there may be little you can do directly to prevent this from having an impact, there are things you can do to support their growth.

And while it’s not directly related, dental issues are particularly common and can impact how much food a Pomchi decides to consume.

Dental problems will not only reduce your Pomchi’s quality of life, but it can even decrease their lifespan.

Their teeth need to be brushed daily. Otherwise, the tartar build-up will quickly turn into an infection of the roots of the teeth and gums.

It is very important to make sure that you go for regular veterinary check-ups in order to detect any problems early on.

Your vet will also advise you on various aspects of care, which will ensure that your Pomchi stays healthy and grows properly.

Despite the variation in size, a Pomchi is a lovely small dog.

The Pomeranian and Chihuahua are two of the most popular small dog breeds, and a mix between them has proved to be a perfect match.

Not only with regard to their size, but their temperaments too.

So, whichever Pomchi puppy you choose, you can rest assured that you are getting a lovely small dog with a big personality.