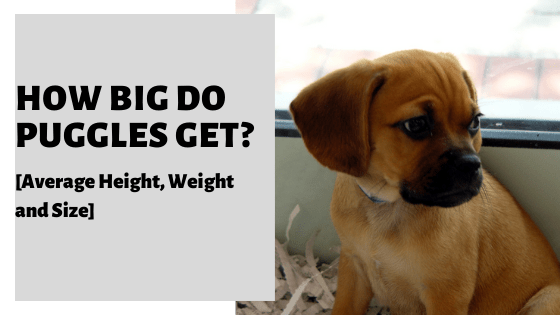 Puggles are a crossbreed dog, bringing in the qualities and traits of the Beagle and the Pug. But how big does the average Puggle get and what can you expect in terms of their final size, height and weight? I spent some time researching hybrid breed and would like to share with you the information and data I have been able to find below.

So, how big do Puggles get? A standard size Puggle can stand anywhere between 10 and 15 inches at the shoulder, weighing in at anywhere between 14 and 30 pounds. Smaller dogs are becoming more and more popular, so the newest thing now is the Pocket Puggle, which are Miniature Puggles and Toy Puggles.

A Puggle is one of those hybrid dogs that can vary quite dramatically. You can never be entirely sure of how they are going to turn out. They can take after either parent, both in regards to their frame, but also in regard to either personality and just about all of their traits.

Since you don’t know which parent your Puggle will take after, its not really possible to look at the parents to determine what size the Puggle will be.

Since there really is about a 50/50 chance of the puppy taking after either parent only time will tell what traits and size the Puggle will have once they are grown.

Nevertheless, its important to seek out reputable breeders. You will want to ensure they have been bred properly, ethically and from a superior lineage of dog.

Let us now take a closer look at the average Puggle size along with other important considerations.

This will give you a better understanding and enable you to better set your expectations if you did decide to get one!

The average Standard Puggle reaches between 13 to 15 inches in height, weighing between 18 and 30 pounds. They are considered a small to medium dog breed.

A Toy Puggle will be smaller, coming in between 8 and 13 inches inches in height and weighing somewhere between 8 to 17 pounds. Toy Puggles are considered a small breed of dog.

For some breeds, it’s a lot easier to make an educated guess at their final size, but with Puggles, their parents are in two different size categories.

The Beagle is considered a small, compact dog. They are small, usually not exceeding 15 inches, but tend to be a bit heavier and can weigh between 22 and 35 pounds.

Pugs are not much smaller than the Beagle, however they are classified as toy dogs, standing between 10 and 13 inches, but they do weigh a lot less in the range of 14 to 18 pounds.

On average a Puggle can be expected to be somewhere in between, however this isn’t always the case and they can take after one parent more-so than the other, and their size will be dependent on that.

In addition, it is always possible to get a puppy that is the exception to the rule.

30 pounds may be the average upper limit for a Puggle’s weight, but it’s entirely possible for a Puggle to weigh in at 35 pounds.

This doesn’t mean they are always going to be a healthy 35 pounds, other factors would determine that, and your vet will let you know.

When Is A Puggle Fully Grown?

Puggles will reach their full height between 6 and 8 months of age, but they will continue to put on weight with added muscle up until they are a year old. This is about an average time for dogs of their size.

Larger dogs will take much longer to grow, and they could be 4 years old before they are fully grown. That’s a long time to have a puppy!

Not only that, generally they are pretty big puppies. My Labrador Retriever is 8 months old and already 70 pounds, that’s a lot of strength in a dog that still has a puppy mind and coordination.

Just because your Puggle will continue to put on weight for up to six months after reaching their full height, you still need to because with feeding, ensuring that the extra weight they are putting on is mostly muscle to fill out their bodies.

If you notice that your Puggle is looking a little plumper than they should, cut back on feeding a little bit and add in some extra exercise. But be sure not to overdo it in either direction.

A growing puppy should not be malnourished or subject to overexercising. Its always best to consult with your vet for an appropriate approach here.

When Does A Puggle Mentally Mature?

Sometimes it’s hard to remember that your puppy is still a puppy, especially when they’ve reached their full physical maturity.

You see what looks to be a grown dog still acting like a child. It can be entertaining at times so appreciate these moments! Plus, time flies and before you know it your baby will be fully grown, both physically and mentally.

Early training and socialization for your Puggle will help them as they mature. You don’t want them to develop some of the bad habits that puppies have and take them into adulthood as behavioural issues.

For socialization; its important to provide as much exposure for your Puggle as possible with other people, dogs, events, circumstances, situations and sounds.

This will help them to become a better rounded, confident dog and one in which is more open to being around other people and dogs.

What Contributes To A Puggle’s Size?

The biggest contributing factor to a Puggles size is their parents, and which parent they take after more. If you have a large Beagle and a large Pug, then there’s a pretty good chance that you are going to have a large Puggle.

The complete opposite is put into play to create a Miniature Puggle and a Toy Puggle. Breeders will breed the smallest Pug and Beagles to try and make a smaller Puggle.

Unlike other Toy breeds, such as the Poodle, the smaller Pugs aren’t necessarily official sizes, they are just smaller versions of the regular Pug and Beagle.

All Miniature and Toy breeds start out this way, but after many generations of breeding with the smaller versions, you’ve come up with a separate version of the dog.

The Miniature and Toy Puggles are just too young at this point for there to have been enough generations to have it split into its own category.

It’s important to note that while the Beagle and Pug are recognized by the American Kennel Club (the AKC), but the Puggle is not.

Again, there haven’t been enough generations of the cross breed for it to be considered a purebred.

This is true about many crossbreeds and hybrid dogs. Its not exclusive to Puggles and it is not something to be concerned with.

The American Kennel Club is the organization that sets standards for all recognized registered breeds. These are the dogs that you see in show competitions such as the Westminster Dog Show.

The AKC is very strict about acceptable standards, and some dogs won’t be accepted just because the hue of their coat may be too dark, or too light.

Lastly, regarding their weight – its of course imperative that they are fed an appropriate and high-quality diet. This is true for all stages and ages of their lives.

They should be fed as much food as they need for optimal growth and maintenance, and will require a certain amount of protein relative to their age. If food does need to be cut back; it should be in the form of treats first.

Sufficient exercise is also required; which they will require daily. A couple of 15-minute walks or playtimes is sufficient for this breed.

Exercise and being kept busy will not only enable them to use up excess energy but will also prevent boredom which can result in destructive behaviors.

Puggles are the result of breeding a Pug and a Beagle and they have been around for about 40 years or so. They are adorable dogs and can strongly favour one parent over the other. In the case of a Puggle, one breed’s genes are not fully dominant over the others.

The average Puggle is usually between 10 and 15 inches, which is pretty similar to both of its parents. Their weight is one area in which you can tell that they sometimes take after one parent more.

Pugs weigh in at about 14 to 18 pounds and Beagles usually weigh in around 22 to 35 pounds.

The Puggle is a bit of a mix and in most cases weighs between 14 to 30 pounds.

If your Puggle weighs 30 pounds than it’s safe to say they have taken on the physical size of their Beagle parent since Pugs just don’t get anywhere near that size. But you won’t know until they are older puppies what size they are going to be. Think of your Puggle as a Mystery Box.

The size of the Beagle and Pug parents are the biggest factors when it comes to the size of your Puggle.

Unlike some larger breeds, feeding your Puggle puppy food for too long will not make them bigger in height, just larger in circumference as they will become overweight.

Miniature and Toy Puggles are starting to pop up more. Breeders are using smaller puppies in litters, most often the runts of both Beagle and Pugs, to breed small puppies.

These dogs are nicknamed Pocket Puggles but are not yet recognized as an official version of a Puggle.

Speaking of official and recognized, the Puggle is not recognized by the American Kennel Club, which is the authority in all things dog, especially when it comes to breed standards.

Both the Beagle and Pugs are recognized by the AKC, and who knows, maybe after a few more generations of breeding the Puggle will be recognized too.

Puggles are great dogs, they are intelligent and affectionate, and get along with kids, strangers, and other dogs alike.

They can have a stubborn side to them but early socialization and training, as well as showing them that you are the alpha, will help prevent the stubbornness from growing worse as they get older.

Just remember, if you have a specific picture in mind as to what you want your Puggle to look like, breeders can give an educated guess on what the litters will look like, based on past litters, but nobody will know which parent each Puggle puppy will take after until they are a little older.

Is A Puggle A Small or Medium Dog?

Standard Puggles are considered to be small to medium-sized dogs. They typically only reach up to 15 inches in height, and 30 pounds in weight. Miniature and Toy Puggles are both considered small dogs.

Puggles are gentle, sweet-natured, and affectionate dogs. They like to be close to their owners and they love to cuddle up close to people.

Before you go, be sure to check out my other guides on Puggles: