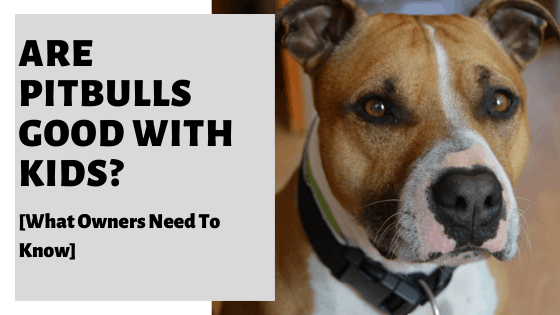 Pitbulls are medium-sized yet muscular and powerful breed of dog. They have acquired quite a reputation and it’s common to see alarming news articles and publications warning about them. But is this entirely fair? Are they inherently dangerous and is it safe for children to be around them? To put their reputation to the test, I spent a lot of time researching the traits, characteristics, and tendencies of the breed. Here is what you need to know.

So, are Pitbulls good with kids? Pitbulls are generally great with kids, if trained and socialized appropriately from a young age. Pitbulls are generally very affectionate, obedient, and loyal to their owners; they also love to play and cuddle. However, just as is the case for any breed, pitbulls should never be left unattended with children.

Unfortunately, some owners have trained their Pitbulls to be aggressive which has caused their unfair reputation and has led to a number of instances in this breed.

However, this reputation has not always been the norm.

In fact, this breed was once known as the original “Nanny” dog.

Pitbulls have long been trusted with their role as a protector; even to their smallest humans.

They love nothing more than playing and be cuddling, traits that are ideal if you have children.

Let us now take a closer look at some of the most commonly related questions to the topic.

We will be looking at whether Pitbulls are dangerous before looking closer at why they are good with kids.

We will finish up with some tips for owning a Pitbull while having children so be sure to keep on reading to the end.

Disclaimer: This article was written with research of the pitbull breed standard. It is not meant to substitute proper due diligence, and caution should always be exercised with any dog around children.

Pitbulls are not any more dangerous than any other breed of dog. Though, they can be if trained or raised inappropriately.

Any dog will bite if it is provoked enough, and dangerous dogs come from all kinds of breeds, in different shapes and sizes.

It was not that long ago that people would cross the street if you were out walking with your German Shepherd, Doberman, or Rottweiler.

To fully understand, it is important that you know just what a Pitbull is.

In fact, a Pitbull is not actually a breed of dog at all, but rather a type of dog, much like the way we use the term “hound”.

Depending on which camp you are in, there are also several others considered to be part of the Pitbull clan, including the Bull Terrier and the American Bull Dog.

It is no secret that Pitbulls were trained to be aggressive so that they could fight with other animals.

However, they were NEVER trained to be aggressive to humans.

Unfortunately, the Pitbull’s need to please their humans made them easy targets for those who trained them to be mean.

Once they came more into the spotlight and were used for nefarious purposes, many places started to ban the breed with the use of BSL or Breed Specific Legislation.

Now, it is a common misconception that Pitbulls are dangerous because their jaws lock when they bite. This is absolutely false.

They, nor any other breed have a mechanism in their mouths that would allow this to occur.

When it comes right down to it, smaller dogs can be far more vicious when they bite.

Some Poodles and Chihuahuas can be downright ferocious, whether they are provoked or not.

Another falsehood is that Pitbulls have the strongest bites.

In fact, while Pitbulls do bite with the force of 235 PSI, a Rottweiler bites with 328 PSI, and a Great Dane is off the charts at 669 PSI.

In the right circumstances, these two can go together surprisingly well.

One thing to learn about Pitbulls is that they are hilarious and absolutely goofy, just like kids.

Maybe that is why they are almost obsessed with these tiny humans.

Pitbulls have long been known as people-friendly dogs.

Perhaps one of the best-known Pitbulls ever was Petey, the family pet on the television show The Little Rascals back in the 1930s.

Now, it is true that there are cases of pitbulls being aggressive; and there is no denying the reports and sightings of pitbulls attacking other people or animals.

Though, do consider that this has a lot to do with the owner, and how they have raised their dog, than a genetic or inherent characteristic of the breed.

As such, they do need to be socialized around children as soon as they are brought through the door, and children need to be taught not to tease their dog, especially with food.

However, a Pitbull that is well-trained, from a reputable breeder, and emotionally stable is typically a wonderful addition to the household.

The biggest thing to remember is that Pitbulls are extremely energetic and strong animals. They also do not know their own strength.

One thing to consider is that owners report that they have tails like a whip. There are stories of shins being on the receiving end of a wagging tail and it is downright painful.

This breed loves to roughhouse but can end up knocking a child over if playtime gets really exuberant.

Why Are Pitbulls Good With Kids?

Pitbulls are good with kids for several reasons.

Pitbulls downright love kids. Out of all the dog breeds, Pitbulls are considered to be one of the most tolerant when it comes to children.

They are also one of the most highly rated on temperament according to the American Temperament Testing Society.

In fact, the only dog breed with a higher rating is the Labrador Retriever!

Because they are Terriers, after all, Pitbulls have two distinct speeds – sleep and GO!

With their almost endless supply of energy and athleticism, Pitbulls are always ready to play with kids.

Whether it is just running and chasing them around, playing a game of fetch, or going for some water play, as long as there is a child around, your Pitbull will be all in.

As your dog grows, so will the bond between him and your child.

The loyalty and faithfulness of a Pitbull are unwavering, and kids will have them standing by their side for their entire lifetime.

They love to please even their youngest humans and would do anything for them.

My grandchildren have been around their Pitbull since each came home from the hospital, and those three boys have her wrapped right around their little fingers.

Things To Consider When Owning A Pitbull And Having Kids

There are a couple of things you may want to consider should you decide to own both a Pitbull, and have kids.

Depending on how old your kids are, you may not have the time to devote properly to a Pitbull, especially a puppy.

They are not high maintenance, but they need plenty of attention, affection, and exercise.

Thankfully, Pitbulls play so hard that they require an abundance of restorative sleep – 18 to 20 hours per day as a puppy, and between 12 and 14 hours as an adult, so you will manage to have a little bit of time for yourself!

You will absolutely need to get your dog trained. Whether you do it yourself or have it done professionally is up to you, but it must be one or the other.

It is critical that you prioritize the training of your Pitbull, both for them and you. They must know that they take direction not just from you, but from your kids as well.

Make sure to get your pet spayed or neutered. Altered dogs are far calmer and less aggressive than dogs that are not altered.

Having your Pitbull fixed can also help to prevent some health issues, such as breast cancer in females.

Let the relationship between your child and your Pitbull develop naturally.

As they get to know each other, the bond they form will last forever and you want it to be as strong as possible.

The best way to ensure this happens is by following the steps below:

Not all people are fond of pitbulls, and that’s their prerogative and should eb respected.

So, it is not out of the realm of possibility that there may be some parents who will not let their children come over to your home because of the dog.

Other people may also refuse to visit.

There will probably also be times when you will not be able to take the dog along on family excursions, or to certain events.

Owning a Pitbull is a serious responsibility that should come after plenty of thought. They are full of love to give but you need to be ready to take them on.

Regardless of whether you get your pet as a puppy, or adopt one from the shelter, their average lifespan is roughly 11 years, so there is a long-term time commitment involved.

One thing is for sure, the day you bring your Pitbull home is the day your child has met their best friend!

Just be mindful that they are moderate barkers!

Are Pitbulls Safe Around Babies?

It is not commonly advised to leave a dog around a baby; regardless of the breed. For Pitbulls, there is no reason why they would be unsafe; unless the baby provokes them, or does something that makes the Pitbull agitated or respond in fear. That being said, it is advised not to leave your Pitbull around a baby at any time.

Do Pitbulls Get Jealous Of Babies?

Pitbulls can get jealous of babies, just like any other family member, if they are not receiving enough attention themselves. This is true of all loyal dog breeds. Pitbulls do experience a range of emotions, and if they are neglected and the baby/other family member gets all the affection; they can begin to act out.

Wondering what other dog breeds are good with kids? Check out my guides below: