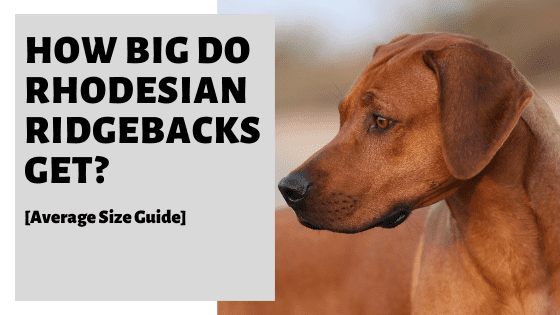 If you are contemplating the Rhodesian Ridgeback breed, you will naturally want to know how big they get. How tall do they typically stand? How much can they weigh? And how much space does an adult Rhodesian Ridgeback need? This handy guide will help set your expectations for their size by answering these questions along with other key things you’re going to need to know. That way you’ll know whether you can accommodate them, or be willing and able to take them on!

Note: The above height measurements are taken from the ground to the top of the shoulder blade.

Know you have a rough idea; but what does this all mean, practically?

Let’s delve into it!

What Is The Average Size Of A Rhodesian Ridgeback?

The average size of a Rhodesian Ridgeback male is between 80 and 90 pounds, whereas females tend to weigh on average about 70 pounds. Average heights for most males are between 25 to 27 inches and 24 to 26 inches for females.

How To Predict The Adult Size Of Your Rhodesian Ridgeback

In addition to the age of your puppy, there are two more reliable ways to help you get a sense of how big your Rhodesian Ridgeback will get.

Many people look at their puppy’s paws to determine the size he’ll reach as an adult.

If your puppy’s paws are still large compared to the rest of his body, he’ll still have some growing to do.

He’ll continue to grow till he’s in proportion: some people call this “growing into their paws.”

The sizes of your puppy’s parents are one of the best predictors of how big your puppy will become.

If you got your Rhodesian Ridgeback from a breeder, look at the size of the parents.

Or contact your breeder at a later date to ask for specifics (a good breeder will be happy to give them to you).

It’s very rare for a puppy to grow bigger than the larger of his parents.

If Your Rhodesian’s Size Is Different From The Average

All dogs are different, and your puppy might grow at a faster or slower rate. Variations are perfectly normal.

If you have an adult Rhodesian Ridgeback whose weight or height is quite different from the average figures quoted above, it would be good to consult with your vet.

You want to make sure that your Rhodesian Ridgeback is healthy and that there’s a natural reason for the height or weight difference.

How to Help Your Rhodesian Puppy Grow Healthily

Here’s what you can do to make sure your puppy will grow into his full size.

Apart from genetics and breed, nutrition is the single largest factor in determining the rate and success of a puppy’s growth.

Dogs need a good variety of vitamins and minerals to ensure their bodies will grow at a healthy rate.

Some dogs can suffer from stunted growth because of a lack of nutrition.

If you are unsure about the best nutrition for your dog, check with your vet, who will be able to advise you.

Generally speaking, puppies need specifically formulated puppy food. Once they are one year old, they can start transitioning to high-quality adult dog food.

Be Mindful Of Stairs

In order to protect their bones while they are still developing, puppies are not meant to climb or go down the stairs until they are fully grown.

For large breeds such as the Rhodesian Ridgeback, this means no stairs before 14 months old!

Be prepared to install a ramp or keep your puppy downstairs if you have steps at home.

Smaller breeds can be carried, but Rhodesian Ridgebacks get heavy very quickly!

At What Age Are Rhodesian Ridgebacks Full-Grown?

Most Rhodesian Ridgebacks are full-grown at about 14-16 months old. Some, however, can continue to grow and increase in weight and muscle until they are two years old. This is more common the males.

Rhodesian Ridgebacks have a slower growth rate than other dog breeds since they are a large-sized breed.

It’s entirely normal for your Rhodesian Ridgeback only to reach his full size at the age of two.

Here’s what to expect for a growing Rhodesian Ridgeback puppy, following the typical puppy stages up until adult size.

Bear in mind, though, that all dogs are different.

Your puppy might grow at a faster or slower rate. Variations are perfectly normal.

Here’s what you can expect at the various stages of life of a female Rhodesian Ridgeback puppy:

Here’s the equivalent progression for male Rhodesian Ridgeback puppies at the same stages of life:

How Much Space Does A Rhodesian Ridgeback Need?

A Rhodesian Ridgeback is an athletic dog who needs a lot of space to run and play, as he was bred in South Africa to chase large game for miles. You don’t need a large yard as long as you make sure your dog gets regular and vigorous exercise (2-3 times a week for at least an hour, in addition to daily walks).

If You Have A Yard

If you have a backyard, make sure the fence is at least 6 feet high.

Rhodesian Ridgebacks have been known to get over 5-foot-high fences to satisfy their curious nature and strong prey drive.

Always supervise your dog when he’s out in your yard. Ridgebacks can get distracted quite easily if they spot other animals, as they were bred to give chase.

These dogs also love digging holes, so if you don’t want holes all over your garden, you may want to provide your dog with his own digging patch.

If You Don’t Have A Yard

If you don’t have a large yard, there are things you can do to provide space for your Rhodesian Ridgeback to run and play.

Make time every day for regular exercise with your dog so that you can keep fit together.

In addition to daily walks, try one of these options two to three times weekly:

Note: If you have a puppy, wait until he’s at least 15 to 18 months old to implement vigorous exercise. His bones need to be fully developed before he does any jumping, jogging, or even going up or down steps.

Play Games With Your Ridgeback

Your Rhodesian Ridgeback will love playing games with you, like:

Other Ways To Satisfy Your Rhodesian Ridgeback

Whether you have a large yard or not, you’ll want to make regular visits to a dog park.

Dog parks are excellent for Rhodesian Ridgebacks because you’ll know that your dog can safely burn off some of his boundless energy.

These dogs are highly energetic and often have more energy than their people, so let your dog run and play off the lead with other dogs.

Dog parks are also excellent for socializing your dog.

By bringing your Rhodesian Ridgeback to a dog park once a week, you’re ensuring that your dog is used to playing with other dogs.

You’re also making sure your dog isn’t dependent upon you for his happiness 24/7!

Lure coursing is highly recommended for dogs with high prey drives, such as the Rhodesian Ridgeback.

The performance circuit allows these dogs to demonstrate their natural hunting skills by chasing lures that simulate live prey.

Some places offer varying types of lure coursing where dogs are evaluated based on their stamina, speed, and agility.

Look for a lure coursing (or sighthound club) in your local area.

There are a wide variety of other clubs on offer, too, such as tracking clubs, agility clubs, and obedience clubs. Something for everyone!

They’re not the biggest out there, but they are certainly much larger than your average lap dog!

And while these dogs may seem small and cute while they are puppies, it’s essential to realize that in 14 months following birth, they’ll be much bigger.

You’ll need to be able to accommodate them.

But not only that, this is an extremely active and high-energy breed.

They require at least one hour a day of energy-burning exercise, but more is preferential.

So do consider these things too!

Is A Rhodesian Ridgeback A Large Breed?

Rhodesian Ridgebacks are classified as a large breed. Comparatively, they are similar in size to Labrador Retrievers, German Shepherds, Dobermans, and Great Dane, among others. All of which share the large breed size classification.

Are you still researching the Rhodesian Ridgeback breed? Then my other guides may be of help: