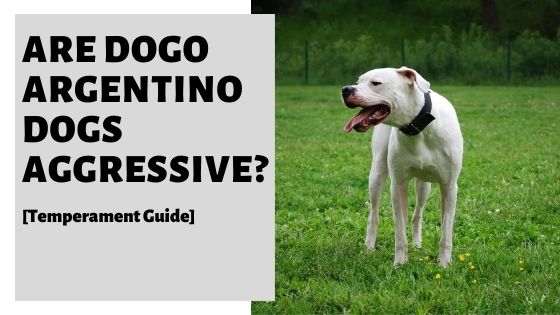 If you are considering bringing a Dogo Argentino dog into your family, you will naturally want to know if they’re aggressive. Besides, these are large, strong and muscular dogs. But what is their typical temperament like? Is their intimidating appearance anything to go by? Well, here’s everything you’ll want to know.

So, are Dogo Argentino dogs aggressive? Dogo Argentino dogs are considered one of the most aggressive breeds, although they are not necessarily dangerous to people. These dogs were bred to be fighting and hunting dogs, tracking down wild boar and puma. Without proper training and socialization, they can be dangerous, particularly to other animals.

Perhaps not what you wanted to find.

But at the same time, this probably doesn’t come as much of a surprise.

At least if you know anything about the breed already.

But there is of course more to it than the overview provided above.

So keep reading – we’ll be exploring the breed’s temperament in much greater detail including those instances where aggression is most likely to be seen and most importantly, how to prevent it.

Disclaimer: This article was written with research of the Dogo Argentino breed standard. It is not meant to substitute proper due diligence, and caution should always be exercised with any dog.

What Is The Typical Dogo Argentino Temperament?

The typical Dogo Argentino temperament is a mixture of courage and kindness, with a high need to stay active and have jobs to do. While they are headstrong, they also have a sensitive side and are somewhat eager to please.

A Dogo Argentino is a courageous dog who will not back down from a fight.

He will go after prey without thinking about his own safety.

The creator of this breed, Antonio Nores Martinez, wanted a dog with heart that would be fearless yet a good companion.

The flip side of this dog’s courage is that a Dogo can chase a small animal into the street, paying no attention to oncoming cars!

These are kind dogs, despite their reputation for being one of the most aggressive dog breeds (Dogo Argentinos are currently banned in ten countries, including the UK, Australia, New Zealand, and Portugal.)

Properly trained and socialized Dogos are known for being friendly and kind with children that they know well.

The best way to ensure Dogos get along with children is to introduce them to each other at a young age.

Although many unscrupulous and illegal breeders breed them as fighting dogs, Dogos are not normally aggressive towards human beings.

Dogo Argentinos crave physical affection from their families as they form strong bonds with their people. They will snuggle you or lean up against your leg at any opportunity.

Dogo Argentinos have a very strong prey drive as they were bred originally for hunting large game animals.

If you decide to get a Dogo Argentino, you’ll need to keep him away from other animals, as he will try and hunt them down.

So, if you already have a cat or another dog, it’s best to consider another breed.

These dogs need jobs to do, as they relish being active and useful. Your Dogo can be your jogging partner or your hunting companion.

Dogos won’t be happy doing nothing – they need lots of exercise every day, including mental stimulation.

Your Dogo will know what he wants, and he needs an experienced dog owner who can be a consistent and kind yet firm leader.

These dogs aren’t appropriate for first-time dog owners, as they can easily dominate people who don’t know how to handle this intelligent breed.

It may come as a surprise that these dogs can be sensitive given their strong and courageous natures.

Your Dogo will bond with you and want to please you, so if you scold him, he may cower or get overly anxious.

It’s best to avoid scolding and use consistent training techniques that emphasize rewards (see below.)

Dogo Argentino dogs are highly protective of their territory as well as their human companions. They are members of the Mastiff family and are easily trained as guard dogs because of their protective natures.

He’ll Protect You And Your Property

Because of his territorial nature, you’ll need to ensure you have a strong, very high fence around your property.

You’ll need to be with him when he’s outside, as he can attack and kill any unsuspecting cat or another animal who strays onto your property uninvited.

Dogos are often bred as guard dogs since they are known for being fearless. If your dog were to encounter someone he viewed as a threat (such as an intruder), he would fight to the death. He will literally protect you and your family with his life, if need be.

Be Careful Around Strangers

You’ll want to know that because of their loyal natures, Dogo Argentinos can be overly protective of you around strangers.

If your Dogo barks at a stranger, you’ll want to immediately redirect his attention to something else. For example, get him to obey a command (hence the importance of good training, see below.)

Note: Dogos can behave well around strangers provided they’ve had consistent and firm training by their owners. These dogs have been branded as dangerous and prohibited in some countries mostly through the fault of improper training!

Dogo Argentino dogs can become aggressive around strangers and other animals because of their protective nature and strong prey drive.

Unwanted Animal Visitors In His Territory

If another animal enters your Dogo’s territory, he’s going to want to attack, and there’s little you can do to prevent him from doing this.

His instinct will be to immediately go for and remove the unwanted visitor, and he will usually go for the kill.

Male Dogs In His Territory

Dogos aren’t known for getting along well with other dogs, especially male dogs whom they’ll see as competition. Keep other male dogs away from your Dogo if you don’t want a fight.

You can get your Dogo used to other male dogs in puppy classes where a trainer is present, but be aware that Dogos are instinctively protective.

Your Dogo can learn to tolerate another male dog, but he will need to be supervised, and it can’t be in his territory.

Visitors To Your Home

When visitors come to your home, this may set off your Dogo’s protective instincts.

You may want your dog to bark if strangers approach your house, but with visitors, you’ll need to train your dog to accept them (see below.)

Lack Of Exercise Or Attention

Dogos are working dogs who can still be full of energy after a ten-mile walk!

If you need a dog who can stay in an apartment for hours at a time, a Dogo Argentino isn’t the right choice of breed.

Equally, these dogs need companionship with plenty of affection from their people. The best way to reward your dog’s loyalty to you is by giving him lots of exercise and love.

How To Prevent Aggression In Dogo Argentino Dogs

To prevent aggression in Dogo Argentino dogs, it’s essential to provide lots of socialization, exercise, and training throughout their lives.

You’ll want to provide socialization for your Dogo puppy right from the beginning. Be sure to select your dog from a reputable breeder who has raised the puppies in a home environment.

Ensure that the breeder has exposed the puppies to many different people as well as household sounds, sights, and smells.

These puppies need socialization more than just about any other dog breed, and the process must begin with the breeder.

Once you bring your Dogo home, keep exposing him to new people as well as other dogs (under close supervision.)

Take him to puppy classes. Bring him to see friends and neighbors. Take him with you when you go out shopping or on other outings.

When guests come to your home, command your Dogo to sit.

Over time and with consistent repetition, you’ll be able to train your Dogo to wait calmly to greet visitors.

When he knows these people are welcome guests, he’ll be excited to see them. Make sure your visitors know to stay calm and relaxed so that your dog is more likely to be calm.

You want your Dogo to gain a complete understanding of what is normally acceptable and what is a threat.

The only way he’ll learn is if you show him on a consistent basis throughout his life.

Your Dogo Argentino will require lots of exercise every day to keep his powerful body fit and healthy and keep his mind busy. Make sure he goes on regular runs and walks and that he has opportunities to run and play.

Make sure you know how to train your Dogo Argentino puppy.

You’ll need to establish yourself as pack leader right from the start, as these dogs are strong-willed. Your Dogo needs you to be assertive and calm.

Provide consistent training without using punishment of any kind.

In addition, arm yourself with patience: breeds with strong wills need extra training time despite their intelligence.

Your Dogo may suddenly decide he doesn’t want to learn anymore: in that case, leave the training session for a little while.

Once your dog has had a break of an hour or so, he’ll probably be ready to finish that training session.

Dogos, like all dogs, do best with training that focuses on rewards for good behavior rather than scolding or punishments.

Spend Time With Your Dogo Argentino

Spend lots of time with your Dogo.

These dogs are not meant for spending all day alone – that’s when they can become extra aggressive out of boredom or loneliness.

Your Dogo will want to cuddle you as well as run with you, so make sure you can do both!

Dogo Argentino dogs can be aggressive.

In fact, they are more likely to be aggressive than a lot of other breeds.

And more likely again in given circumstances.

That being said, this does not automatically mean you cannot own one.

And while it is true that they may not be suitable for every family, they can make great companions for others.

They do, however, require a sufficient and consistent approach to training and socialization; and the right care and attention along the way too.