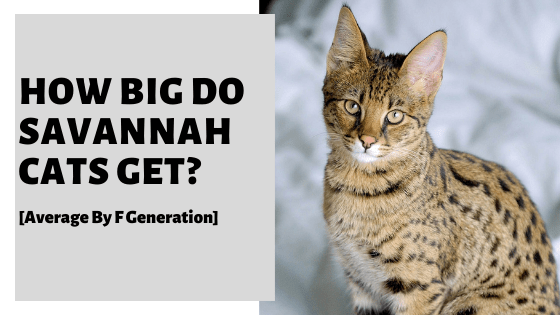 Savannah cats are so striking and difficult to forget. Being a blend of wild and domesticated cats; it’s only natural to wonder about how big they will get, and how quickly they reach their full expected adult size. I spent some time looking into the various generations and what owners commonly report. Below, you’ll be able to learn from what I found.

So, how big do Savannah cats get? Savannah cats typically reach between 10″ and 16.5″ in height, weighing between 8 and 23 pounds at full adult size. The generation of Savannah largely dictates their overall size. Generations that are most closely related to the Serval (and wild cat) are larger than those furthest removed. There are more than 7 generations, each being smaller in size each time. Generally, males are larger in each generation than females.

Although the Savannah cat is roughly the same size as a larger household cat, its long lanky legs and enormous ears blend together to create a distinct family pet.

When you see a Savannah; you will immediately notice the difference. Agile and elegant and adorned with the exotic patterns of a wild cat.

Nevertheless, a Savannah cat is happy to walk the suburban streets, while also being a well-tempered and affectionate house kitty.

They are playful, adventurous, and loyal in temperament. Even willing and able to take to the water, walk on a leash and even play fetch!

Let us now take a closer look at the average Savannah size in much more detail. We will be looking at the average size by generation and the age at where owners typically notice their cats stop growing.

We will also be looking at how much space you would need if you did want to take one in.

So, if you are serious about this particular hybrid of cats, be sure to keep reading to set your expectations and plan accordingly!

The average Savannah cat height, weight, and size is simply a range; 10″ and 16.5″ in height, and 8 and 23 pounds in weight. It’s difficult to be any more specific than this.

That is because every Savannah cat is different within each of the generations. This is why it has even been reported that some can weigh up to 30 pounds. That is more than some small dogs weigh and are almost 4x the size of another Savannah of another generation!

To understand the generations, you will need to know a little bit of the history surrounding the Savannah cat.

The very first Savannah cat that was born in 1986 was not planned, but rather the result of a female Siamese housecat and a visiting serval male getting together on the sly.

The kitten was originally named Miracle, but this name, and the name of this new breed, was eventually changed to Savannah.

In Africa’s sub-Saharan countries, the Serval is a wild cat that is commonly seen in the savannahs.

These hunting grounds allow Servals to stalk their prey by using the tall grass as cover. They characteristically have a spotted coat, big ears, and very long legs.

These are traits that have been passed down through breeding and they can easily be seen in any Savannah cat in existence today.

The generations refer to how far removed the cat is from its wild ancestors and each generation has a filial number.

This is written as a capital letter F which is then followed by the generation number.

It is not an overly complicated system to figure out. What you basically need to know is that an F1 is the most closely related to the Serval cat and that the higher you go up the generation chart, the further removed from the Serval they are.

Compared To Other Cats

It is difficult to know just how big any cat will get.

But to put the size of a Savannah cat in perspective, the average mixed breed cat stands about 10” tall, measures between 15” to 20” in length, and weighs between 8 and 10 pounds.

At What Age Is A Savannah Cat Fully Grown?

A Savannah cat will usually continue to grow until the age of 3.

The majority of cats grow until they are between 12 and 18 months of age, depending on the breed.

Savannahs need a bit more time before they reach maturity and are considered to be fully grown – because they have more growing to do!

It can be difficult to tell if your cat has reached their full adult size by the time they are 2, but they should definitely be considered fully grown by the age of 3.

This is not unusual among the large cat breeds.

For example, a Maine Coon can take up to 4 years to reach its full adult size.

What Factors Influence The Size Of A Savannah Cat?

Factors that influence the size of a Savannah cat include sex, breeding, generation, diet, and exercise.

As you can tell from reading the average sizes listed above, a female Savannah is almost always smaller than their male counterparts.

This is generally true of almost any breed of animal – not just cats. So, if you are looking to get the biggest Savannah that you can hope to get, your best bet is to purchase an F1 male kitten.

Accidents do happen and when a Savannah mates with another breed, there is no telling the size or characteristics that you will get.

Being purebred will obviously be a deciding factor in the final size of your pet. Mixed breeds will most likely be far smaller.

Their generation is another factor that will influence the size of your Savannah.

Worth noting is that random genetics do come into play and there can sometimes be large variations even within the same litter.

Diet and exercise also play a pivotal role in the size of your Savannah.

Those who get a premium diet that is specific to their needs tend to grow larger and faster, although this is not a hard rule. Nevertheless, it is imperative that this cat, along with any other, receives the best quality nutrition as possible, from a young age.

Savannahs also need to get enough exercise so that they do not become overweight – an issue that can lead to many different health conditions that can put your pet at risk.

Although owners do not usually find this to be too much of a problem. This specific hybrid of a cat has even been compared to a dog due to the fact that they are keen to participate in similar activities.

How Much Space Do Savannah Cats Need?

Despite how exotic they look, Savannah cats have basically the same needs as a regular domestic house cat. This includes room for them to run and play.

These are very athletic cats; with impressive jumping ability and speed.

This means that your home should have both vertical and horizontal space; to enable them to climb and stretch their legs.

It is for this reason that F1 and F2 generations are not recommended if you live in a small, one-bedroom, apartment.

It ultimately does depend on your home; the dimensions, and whether or not your cat is able or is going to be allowed outside or not.

One thing that you must know if you are getting a Savannah and regardless of the generation, is that they have very high intelligence.

They can easily figure out how to open doors and cupboards, and they know that a blaring alarm clock gets them the attention they are looking for!

Although Savannahs should live indoors, they do love to take advantage of the fresh air, especially on a beautiful day. This is even more important for those kept in a smaller home.

They can be trained to walk on a leash, and this is one option if it appeals to you. It can be a good way to exercise them while equally being an effective way to give them more space and freedom throughout the day.

You could also build them a fenced-in run in the backyard. Just remember that the fence needs to go on the top as well!

Savannahs are well-known for their ability to jump – eight feet high is a good estimate – so you need to protect them from themselves.

Just don’t be surprised to see your Savannah lurking up high and looking down on the world around them.

Some of their favorite spots include the top of the fridge, bookshelves, or your highest cupboards!

One thing Savannah cats do not have in common with domestic cats is that they LOVE water. If you have the room to set up some type of wading pool that they can always have access to they will be much more content and happy.

Savannah cats make excellent pets; and due to the fact that they are willing and able to be walked on a leash, play fetch and get in the water – are in many ways much more versatile than your ordinary cat breed.

Unfortunately, you do need to pay for it.

Savannah cats are out of the price range of most people. They are a very costly breed.

They’re definitely not cheap and not for the fainthearted.

But, if you are lucky enough to own one of these special animals, they will reward you in many ways.

They can form a close bond with their owners, although they are not the type to jump up on your lap very often.

Just remember that getting a Savannah is a big commitment – they have a life expectancy of around 15 to 20 years!

Can a Savannah cat live in an apartment? Whether or not a Savannah cat can live in an apartment will depend on their generation and size, along with how big and spacious your apartment is. It also depends on whether they will have access to the outdoors or not. That being said for F1 or F2 generations it is not recommended or advised. They are larger and more active and can become stressed if kept too contained. Whereas for F3 generations and beyond it becomes increasingly more possible. Ultimately, you need to ensure that your apartment has sufficient vertical as well as horizontal space; as these cats like and need to climb.

Are Savannah Cats dangerous? Savannah cats are not considered dangerous to humans. This is despite their larger size and the fact that the breed descends from a wild breed of cat. However, they do have a tendency to resort to destructive behavior when bored, so they need to be kept both physically and mentally stimulated throughout the day with toys and exercise.