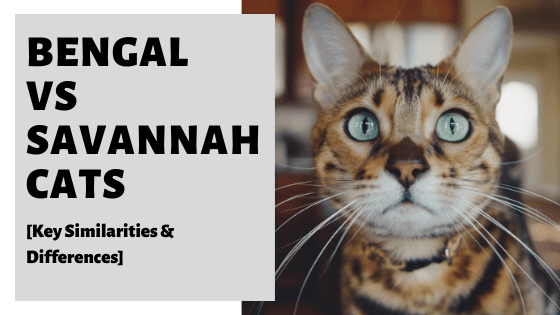 According to The International Cat Association (ICA), there are 71 recognized cat breeds in the world. However, two breeds, in particular, have gained a lot of popularity in recent years – the Bengal and the Savannah cat. Perhaps you are considering getting one but want to know the differences between them before you decide? Well, here is what you need to know.

So, what is the difference between a Bengal vs. a Savannah cat? Both Bengals and Savannahs are hybrid breeds which means that they have wild cat genes in their DNA. However, Bengal cats are a cross between the wild Asian leopard cat and a domestic cat, whereas Savannah cats are a cross between a domestic cat and a wild Serval. Both breeds require special care and a strictly carnivorous diet; however, they each have their own individual breed traits and personalities.

Both of these breeds are the result of a cross between a wild cat and a domestic cat which means they have more specific needs than other cat breeds.

Read on to find how exactly how these breeds compare, both in terms of similarities and differences!

What Are Bengal Cats?

Bengals are a stunning hybrid breed of domestic cats. They are best known for their unique coat patterns of rosettes, spots, or marbling, which are not seen on any other domestic cat breed.

Their unique and exotic appearance has earned them the nickname of ‘mini leopard’ as their coat markings resemble those seen on wild cats, including leopards, jaguars, and ocelots.

The brown spotted coat variety is the most common coat pattern seen on domestic Bengals.

These cats have small to medium-sized spots across their coats, often forming rosette shapes.

Marbled Bengals have a variety of dark swirls and lines that run horizontally down the length of a Bengals’ body.

Despite their wild origin, these cats are known to be highly social, chatty and form strong bonds with their owners.

So don’t be surprised if you find your Bengal sat by the front door, eagerly awaiting your return from work!

In fact, these cats are known to be very dog-like in personality, which means they thrive on interaction and can be taught tricks and commands as well as any Labrador!

They also get along well with dogs they have grown up with.

However, you should be wary of your Bengal being around smaller pets because these cats have a very high prey drive.

Bengals are incredibly energetic and agile cats, so they need to have plenty of room to exercise, as well as a variety of cat trees, shelving to climb on, and interactive toys to play with.

Bengals have slightly different vocalizations to other cat breeds because of their wild ancestry.

They can trill, chirp, meow, and even bark! Unlike most other cat breeds, Bengals also seem to love water.

You will often find one turning the bathroom faucet on and off for their own entertainment. They may even join you in the shower!

The Bengal breed was first bred in 1963 by cat breeder Jean Miller as a cross between a female Asian leopard cat and a black male domestic cat.

Since then, they have shot to fame for their affectionate, playful natures and stunning athletic appearance.

These cats tend to be slightly longer than your average domestic cat; however, they tend to weigh pretty much the same.

Female Bengals can weigh anything between 4.5 -6kg, with males being slightly larger and more muscular.

Their large round eyes give them their characteristic alert look.

The eyes can vary in color depending on coat color; however, the most common eye colors seen in Bengals are brown, green, or gold.

What Are Savannah Cats?

So, these cats must be given the space and mental stimulation they need in order to thrive.

When bored, Savannah cats have been known to start opening random kitchen cupboards or climbing on top of refrigerators in search of a toy.

They can even become destructive if they are not given the care they require.

These cats are generally incredibly loyal towards their owners and love the mental stimulation that comes with clicker training.

They can also get along with other cats and dogs, but all interactions must be supervised as these cats have strong territorial and hunting instincts.

Cat trees and climbing shelves are good options for this breed as they love to climb and are extremely energetic and agile cats!

Just like the Bengal, Savannah cats are incredibly affectionate and enjoy being a part of everyday family life. They love to play games with their owners, just like dogs!

Savannah cats are a relatively new breed in the cat world.

They were first bred in the 1980s by crossbreeding a male Serval with a female Siamese cat.

However, it wasn’t until the 1990’s that these cats were purposely bred for sale. Savannah cats are larger than your average domestic cat, weighing anything up to 22lbs and measuring up to 20 inches in length.

However, the size and temperament of these cats are entirely dependent on their generation.

F1 and F2 generation Savannah cats are banned in many states because they are classed as being dangerous and aggressive wild animals.

However, when you get to F5 cats and beyond, they become much more like your average domestic cat. Whatever the generation, these cats are truly beautiful animals.

They have a long, lean body structure with exceptionally long legs that make them incredibly agile felines.

Their ears are large, pointed, and set wide apart on a triangular head, and their eyes sit under a slightly hooded brow.

Their striking spotted and beautifully marked coats make these cats stand out from the crowd. They really do look like mini cheetahs!

These cats are known to be incredibly affectionate and love nothing more than playing games with the family, but they are not considered to be lap cats.

Due to the high energy needs of this breed, it is important that you devote plenty of time to keeping them entertained so they can burn off some of that excess energy!

They are confident and outgoing cats who love to be around people, even strangers.

How Are Bengal Cats Different To Savannah Cats

Let us now explore some of their main differences more closely:

One of the biggest differences between Bengals and Savannah cats is their size. Asian leopard cats are much smaller than wild Servals, so as a result, Savannahs tend to be much bigger than Bengal cats.

For this reason, Savannah cats are not suitable for people who live in small apartments because they need plenty of space to thrive.

To learn more about each breed, check out my guides below:

Another major difference is that Savannah cats are considered to be wilder in temperament compared to Bengals, as they are a much newer breed.

Bengals today can be bred with other Bengals that have already been domesticated.

Savannahs have a much more complicated and rigorous breeding process which is one of the reasons for their high price tags!

A Savannah cat from a highly reputable breeder can cost up to $20,000. However, the price will vary depending on generation, with F1 cats being the most expensive.

The coat markings on these two breeds also differ.

Bengal cats come in spotted and marbled varieties, whereas Savannahs have a dark-spotted coat that closely resembles that of the Serval.

How Are Bengal Cats Similar To Savannah Cats?

Bengal cats and Savannah cats are both breeds that were developed by crossing domestic cats with wild cat species. For this reason, both breeds are known to need more specialist care than other more domesticated cat breeds. They are also highly energetic breeds, so they need plenty of space and mental stimulation to be happy.

Savannahs and Bengal’s are incredibly agile and have been known to jump over 3x their height!

So, they both need plenty of exercise, which can include the use of cat trees, and even being taken out for walks on a harness and lead if they have been appropriately trained.

Due to their wild ancestry, Savannah and Bengal cats require a good-quality meat diet to remain healthy.

These cats thrive on a raw meat diet but ensure that it is vitamin-rich and protein-rich; otherwise, they can suffer from deficiencies which can lead to health issues.

Another more quirky similarity between these two breeds is that they are both fond of water.

Most cats avoid water at all costs, but these felines are more than happy to jump into a paddling pool or bat at the water coming out of a faucet for hours on end!

Because of this, it is recommended that if you own one of these cats, you should keep the toilet seat down when not in use.

If it is left open, a Savannah or Bengal cat may see it as a toy!

Another common trait seen in these hybrid breeds is a high level of curiosity.

If left to their own devices, these cats will have no issues exploring the house looking for entertainment.

Which can include opening cupboards to look for tasty snacks or jumping in the shower for a wet play session!

Both of these breeds are known to be very social, so neither should be left alone for long periods.

If you are considering purchasing one of these cats, you will need to ensure that you have the time to care for them properly.

They are also incredibly chatty and demanding cats that will follow you around the house complaining until they get what they want!

Finally, neither of the two breeds is thought to shed much, so they are fairly low maintenance on the grooming front.

However, it is important to note that no cat is 100% hypoallergenic.

To learn more about each breed, check out my guides below:

Both Savannah cats and Bengals can be incredibly rewarding and loyal pets; however, they do require a lot of attention, so you need to factor this in when considering whether to adopt one.

If you cater to their needs, give them plenty of opportunities to exercise and stimulate their brains, and give them unconditional love, Bengal and Savannah cats can both become lifelong devoted companions.