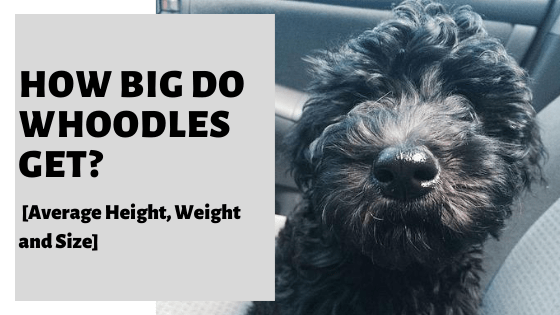 Whoodles are a relatively ‘new’ dog breed; having only been first bred in the last ten years. This hybrid dog is a cross between a Soft-Coated Wheaten Terrier and a Poodle. But, just like their Poodle parents, the Whoodle can be bred in different sizes. But what are they exactly and what height, size, and weight can you expect for each one? This is what the data from the research shows.

So, how big do Whoodles get? Whoodles come in three different sizes; Toy, Mini, and Standard. They can therefore range from 10-20 inches in height, and 25-40 pounds in weight. The total size of this breed is entirely dependent on the dogs used during breeding, particularly the Poodle parent.

As with most dogs, there are always some that fit outside the average range, and the Whoodle is no different, with some Toy Whoodles coming in at 15 pounds and some Standards coming in at close to 60 pounds.

This is all down to the increase in cross-breeding; with Poodles being the focus due to their high intelligence, lack of shedding, and faithful nature.

Either way, these dogs look very much like teddy bears and come with a range of desirable traits, characteristics, and qualities.

Let us now take a closer look at the Whoodle breed’s general size, along with other considerations.

This will help you to get a better understanding and enable you to set your expectations if you did decide to get one!

Most hybrid dogs that have a Poodle as one of their parents will come in multiple sizes, and the Whoodle is no exception here.

The three sizes of a Whoodle match the three sizes for a Poodle and they are, from largest to smallest, Standard, Miniature, and Toy.

The parents of the Whoodle are similar in size to each other, but the Standard Poodle is just a little larger than the Soft-Coated Wheaten Terrier.

The Standard Poodle grows to be about 21 inches at the shoulder and can weigh up to 70 pounds.

The Soft-Coated Wheaten Terrier is only a couple of inches shorter, usually coming in around 19 inches, but weight significantly less at 40 pounds.

The males in most dog breeds will generally be larger than the females, and such is the case with the Poodle and Soft-Coated Wheaten Terrier.

However, when it comes to the Whoodle, both the males and females are the same size on average.

The Whoodle is not recognized as a purebred dog by the American Kennel Club, so no official standards exist for the preferred size appearance of the breed.

But it is accepted that there are three unique versions of the Whoodle.

The smallest version of the Whoodle is the Toy Whoodle and is created by breeding a Toy Poodle and Soft-Coated Wheaten Terrier.

The Toy version of the breed will reach 10-12 inches in height and weigh between 15 to 25 pounds on average.

When breeding a Soft-Coated Wheaten Terrier and a Miniature Poodle you’re going to get a Miniature Whoodle.

The middle-sized version of the Whoodle averages up to 14-16 inches in height and weighs between 25 and 35 pounds.

The Standard Whoodle’s parents are a Soft-Coated Wheaten Terrier and a Standard Poodle and this is the largest of the three sizes.

They are classified as medium-sized dogs and usually reach up to 20 inches in height, and weigh between 35 to 45 pounds.

However, more and more Whoodles are now coming in at larger sizes.

When it comes to breeding and the effects on Whoodle size, it all comes down to the Poodle parent.

In the Whoodle parentage, the Soft-Coated Wheaten Terrier is the constant and the Poodle is the variable.

Even within the same category, for example, the Standard, there could be a difference in size as males are larger than females in both parents.

The 50-pound Whoodles therefore, more than likely, have a Poodle father and a Soft-Coated Wheaten Terrier mother.

Another factor that could affect the size of your Whoodle, but has nothing to do with genetics, is how fast they grow when they are young.

That usually comes down to food and diet; both the type and the amount.

Though it is generally an issue in larger breed dogs, more so than smaller dogs, if a dog is fed too much of high-calorie puppy food for too long, the dogs can grow quickly, and in some cases too quickly.

When Is A Whoodle Fully Grown?

The version of Whoodle will dictate when they are fully grown as different size dogs reach maturity at different times.

Activity Levels And Temperament Based On Size

When it comes to the temperament of Whoodles, there’s not much of a difference, regardless of the size Whoodle you have.

The temperament of the Whoodle is pretty much the same for all versions, and that is friendly, playful, and active.

Whoodles also have a tendency to be headstrong and want to assert themselves as leaders of the household. It will be up to you as the owner to take that role and let your Whoodle know who is really in charge.

Being headstrong tends to really come out during training of your Whoodle.

They don’t take to training very well and will completely fall apart if you are frustrated or angry while training them. They do much better with soft voices and positive reinforcement.

When it comes to the activity level and requirements of each type of the Whoodle, they do differ and will need a different amount of exercise.

This is relatively proportionate to their size, with the smaller versions needing less.

The Standard Whoodle should get at least 60 minutes of exercise per day, at a minimum. Whereas the Miniature and Toy should not get less than 30 minutes.

Whoodles are very active dogs, and even the smaller ones will need a lot of exercise compared to other breeds of their size.

If you find that your Whoodle is showing some behavioral issues it could be that they need more exercise. You can add mental stimulation activities to their day as well to help with that.

Whoodles can take on the look from each parent evenly or heavily favor one over the other. So, you don’t always know what your Whoodle is going to look like and even puppies within the same litter can look very different.

Plus, just to throw another curveball into the mix, Soft-Coated Wheaton Terriers born with darker coats don’t achieve their final look until about three years of age.

Whatever your Whoodle looks like, you can be assured that they’re going to be cute.

This is just my opinion, but I think they take the best from both of their parents because they’re much cuter than either parent.

Whoodles have a single coat of hair that can have a range of characteristics, though one common characteristic is their coats tend to be dense.

The hair can be anywhere from straight to corded to curly and can be medium to long in length.

Their eyes can be amber or brown and their noses can be either black or brown. The coats are generally solid in color but can be spotted.

When it comes to colors, there’s a range of possibilities, including:

Depending on the length and straightness of your Whoodle’s hair, could determine the look of their cut and style.

Whoodles are adorable puppies and they keep that cuteness as they grow into fully mature dogs.

Just like their Poodle parent, Whoodles can come in Standard, Miniature, and Toy versions.

You’re never going to know what your Whoodle will look like before they are born, and just like their Soft-Coated Wheaten Terrier parent, it could take up to three years before their final look is revealed.

One of the reasons it is so hard to guess what a Whoodle will look like is that they can be almost a fifty-fifty mix of their parents, or they may take after one parent more than the other.

When it comes to hybrid dogs you never really know what one will look like, but in a lot of cases they tend to favour one parent more than the other.

Whoodles are great family dogs and you can find one in a size that fits your lifestyle.

You don’t need to have a giant backyard to own one, if you live in an apartment a Toy Whoodle can just as easily get the exercise they need being able to run around inside.

The most common, Standard Whoodle, can be anywhere from 18 inches up to 20+ inches and can weigh up to 60 pounds.

However, most Standard Whoodles come in around 20 inches and about 45 pounds.

They will become fully grown anywhere between 8 months to two years, depending on the version.

You need to be prepared to be an assertive pack leader if you are going to own a Whoodle, otherwise, they will take the opportunity to run the household, and you don’t want that.

Training can be difficult, and will require some perseverance but will be worth it in the end. For both you and your dog alike.

How Much Do Whoodles Cost?

Whoodle puppies cost on average between $1000-$6000. This price largely depends on your location, the number of Whoodle breeders in the area, and other factors such as whether or not they have had vaccinations, been screened, and the kind of environment and diet they have been subjected to.