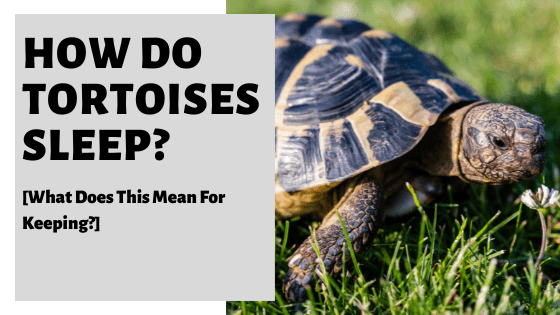 Animals are all unique in their sleeping habits, and tortoises are no different. Bats sleep hanging upside down, and sea otters hold hands. But what about tortoises? Do they have a unique way of sleeping? Let’s find out!

Each species of tortoise is different in its sleeping positions and patterns, and then each individual tortoise has their own preferences as well.

Read on for a guideline on how tortoises sleep and how to tell what’s normal for a tortoise.

Where Does A Tortoise Sleep?

Although the specifics of location differ depending on the species and personality, tortoises tend to choose dark and protected areas to sleep in. These areas include small caves, a covered log, or a burrow.

A factor to consider when figuring out where a tortoise sleeps is the enclosure they’re in.

Tortoises kept outdoors are more likely will to have the opportunity to burrow their own hole to sleep in.

Indoor tortoises need to adapt to their surroundings. This is where having additions such as a small artificial cave and rock in their enclosure will help them get the sleep they need.

Due to their size and proximity to the floor, tortoises are vulnerable to predators.

Because of this, they prefer to find a hidden or secluded spot to comfortably sleep for maximum protection.

Some tortoises will completely bury themselves when they’re sleeping if they have enough substrate to do so.

A lot of tortoise owners notice that their pets retreat into their shells while they’re sleeping. And one owner regularly finds his tortoise sleeping belly up in the morning.

So long as the tortoise is following their normal sleeping schedule, it doesn’t really matter in what position they sleep.

How Long Do Tortoises Sleep?

Tortoises can sleep for about 12 hours, and baby tortoises are known to sleep for 19-22 hours. The normal length of sleep for a tortoise will depend on their age, UV and heat exposure, and their species.

Other than being influenced by the day cycle, the amount of UV and heat exposure tortoises receive will affect how long they sleep.

Tortoises are cold-blooded creatures (ectotherms) and rely on external temperatures to keep them warm.

In the wild, they get this exposure from the sun and can retreat into darkness when they need to rest.

Unless they’re kept in very similar conditions as their natural habitat, regardless of them living indoors or outdoors, they will be cold without the additional UV heat lamp.

Their lengthy sleeping time is another survival tactic tortoises have adapted to counter predator attacks during the night and to withstand cold temperatures when the sunsets.

It might come to the point where they oversleep and need to be woken up. Tortoises can sometimes sleep too much or miss the waking window after brumating.

When Do Tortoises Sleep?

Tortoises are diurnal, meaning they’re awake for the day and they sleep during the night. So long as they have their necessary exposure to UV heat, they’ll maintain this sleeping pattern.

Like humans, tortoises sleep during the night and are even known to occasionally nap during the day.

Napping can be normal behavior for tortoises, but it can also be an indication that something is wrong with their environment or health.

Understanding what’s normal for each tortoise can take time but will help figure out if there is something wrong if they’re oversleeping.

As already mentioned, tortoises rely on external heat to keep their internal temperature in a healthy range.

Without this heat, they are going to sleep longer than normal to conserve their limited heat to keep vital organs functioning.

So long as tortoises have enough heat and UV, they will naturally follow the day (if they’re kept outdoors). When the sun goes down, outdoor tortoises aren’t very long behind them.

This can be mimicked indoors for those that are kept inside by modifying the lighting surrounding their enclosure.

What Can Cause Tortoises to Sleep for Longer?

The most common causes for tortoises to sleep longer are improper enclosure conditions, dehydration, and settling into a new home. Depending on the age and species, tortoises may be sleeping longer because of brumation.

Tortoises need the right amount of heat and light for a few reasons. These include knowing when to wake up, stimulating their metabolism, and becoming active.

Some tortoise owners have noticed their pets choosing to sleep in less ‘tortoise-like positions (belly exposed) because of an ideal basking spot.

The ideal temperature range for a tortoise’s basking lamp is between 89°F and 95°F.

When it comes to UVB exposure, most species of tortoises need a UV output of 10-12%. However, some tropical species don’t require as much.

The UV lamp in the enclosure (if kept indoors) needs to be on for 12 hours a day to prevent tortoises from becoming ill.

Most tortoise experts recommend that indoor tortoises should be kept on tortoise tables. These pens are designed to allow good airflow and enough protection to soothe tortoises.

Additionally, having a terrarium with glass walls can be stressful for tortoises as they walk into them, thinking they can pass through, encouraging stress-related issues too.

If the tortoise’s enclosure is well heated, ventilated, and correctly lit, another cause for a lengthy sleep might be because of dehydration.

Although most species of tortoises are used to traveling far for water in the wild, they can become dehydrated.

Providing a shallow water bowl in their pen or giving regular baths will help rectify a dehydrated tortoise.

A surprising cause for a sleeping tortoise is those who are new to a family. They sleep longer than normal as they adjust to their new surroundings.

Another common cause for excessive sleeping is that the tortoise is trying to brumate (reptilian version of hibernation). This is most likely the case if they aren’t eating at the same time.

Understanding if and what age brumating is safe for a tortoise is important.

What Exactly Is Brumation?

Brumation is when reptiles (including tortoises) sleep in a hibernation-like state for 3-4 months of the year. Because reptiles are ectotherms, they need to conserve their heat during the cold season (between October and April), so they go into a deep sleep to survive.

Even though brumation is a natural survival instinct for wild tortoises, captive ones may not need to go through brumation to remain healthy.

Although that depends on the species as some need to brumate to control their growth rate and reap the benefits.

Some owners decide not to let their tortoise brumate by modifying the lighting in their pen and maintaining the same heat and UV levels throughout the year.

Reasons for preventing brumation include the tortoise’s age and the need to monitor their condition throughout this sleep.

It’s not recommended to let tortoises under the age of three brumate or if you’ve only had your pet for a year or less.

Before choosing to brumate a tortoise, it’s best to consult a vet knowledgeable in brumation for the best advice.

Monitoring a brumating tortoise is important, so they don’t get too cold, lose too much weight, and so they wake up at the right time.

The ideal temperature to keep a brumating tortoise is at 41°F. If the temperature goes too low, they are vulnerable to frostbite.

And if the temperature goes above 50°F, they will stir, move, and use up precious energy.

It’s normal for a tortoise to lose weight during brumation which is a reason why checking with a vet beforehand to know if they’re healthy enough is vital.

The rate of healthy weight loss during brumation is 1% of their body weight.

So, if they weigh 1kg, they can healthily lose 10g per month. A 2kg tortoise can lose 20g per month.

Brumating tortoises only have enough energy reserves for 3-4 months, so they shouldn’t be allowed to sleep past that time.

Sometimes the natural change in weather isn’t enough to wake up a tortoise. Or they’re losing too much weight per month, so they must be woken up early.

To encourage a brumating tortoise to wake up, increasing the temperature of its enclosure above 50°F will start the process.

Also, taking them out of their hibernaculum and warming them over a 24-hour period will help.

Giving them two warm baths daily will encourage them to defecate, therefore kickstarting their metabolism and to rehydrate.

However, if they’re not eating and still sleeping for excessive periods after seven days of warm baths, they need to be taken to an exotic vet to find out the issue.

Like most animals, tortoises need certain conditions to comfortably sleep, but they’re also like humans in their unique sleeping positions too.

So, one of the most crucial things you will need to do if you take one on as a pet is learn your species.

Learn their needs and optimize their environment accordingly.

From there, you will need to consider the process of brumation too.

But that is a topic for another time and likely the question for a vet.