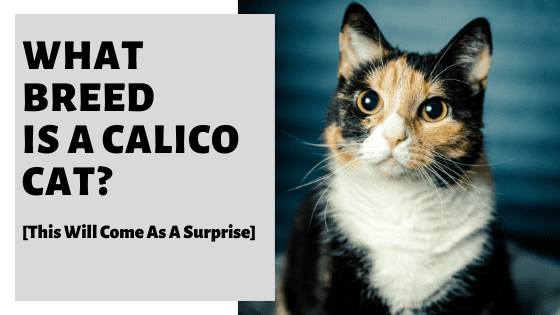 If you are thinking about getting a calico cat, you might wonder what breed they are. Discovering your cat’s breed is highly helpful to know what to expect for their expected size, temperament, and care needs. Here’s everything you’ll want to know about calico cat breeds!

So, what breed is a Calico cat? Calico refers to the beautiful coat markings and patterns on their fur; this is not one breed of cat but rather a chance combination of genetics. That being said, Calicos are most commonly either mixed breed cats or purebreds. Not all breeds allow for Calico coloration, but some that do are American Shorthair, Japanese Bobtail, Turkish Van, and Maine Coon.

Let us now take a closer look at how these cats are classified and differentiated from the rest, before looking at the different types they come in!

What Makes A Cat A Calico?

A cat is considered a Calico cat when the colors on its fur are a mixture of white (25 to 75%) and some orange and black.

Calicos have all three colors: white, black, and orange. Some Calicos, however, can have darker or lighter variations of these colors.

Calicos are usually female, as the X chromosome determines their coloring.

Male Calicos have two X chromosomes and one Y chromosome, a rarity called Klinefelter Syndrome, which causes them to be sterile.

The Calico’s orange and black patches of fur are caused by a genetic event called an X-chromosome inactivation.

The X chromosome is the gene that determines the color of your cat’s fur.

Because females have two X chromosomes, most Calicos are female. Males have one X and one Y chromosome.

X chromosomes carry several genes that code for proteins that the cat needs in order to survive, but because females have two X chromosomes, one of them is inactivated at random when the kitten is still developing in its mother’s womb.

An X chromosome is inactivated because having two active X chromosomes could pose a threat to the cat’s survival (risk of toxicity from too many protein codes).

Therefore, if the X chromosome that’s inactivated is the one that carries the gene for white fur in a certain spot on the body, another color is activated instead (such as orange or black).

Deactivated X chromosomes are selected at random, which accounts for the many different color variations among Calico cats.

Each Calico’s combination of fur colors is random, and therefore unique!

This is why you can have an orange tabby cat with patches of black or white fur – or a black cat with calico patches of white and orange.

There are several types of Calico cats.

These cats have the usual white bodies with black and orange patches.

They are sometimes called tortie-and-white cats since they look similar to a tortoiseshell cat except for the large patches of white.

These Calicos usually have white legs, chests, and faces.

The black and orange patches tend to be on their backs, ears, and foreheads. They can sometimes have patches of color on their legs, as well.

Dilute Calicos have softer and more pastel colors than their classic Calico friends.

Their black colorings can be closer to a smoky grey or blue color, and they tend to have cream or tan-colored spots in place of the orange.

Some countries call Dilute Calicos Clouded Tigers or Calamanco Cats because of their faded colors.

Their colors are faded when both parents pass on the recessive gene, and their parents aren’t necessarily Dilute Calicos themselves.

Patched Tabbies are another type of Calico who are distinguished from their friends by their tabby patches.

These cats often have a marking on their foreheads in an M shape.

They may have white paws, as well as stripes in the black and brown patches on their bodies.

As with all Calicos, Patched Tabbies can have long or short hair.

What Breeds Can Calico Cats Be?

Calico cats can be any number of breeds. The following breeds allow for a Calico coloration:

Calicos can also be mixed breed cats: as you can see from the list above, there are many possibilities for these gorgeous cats!

How To Tell What Breed A Calico Cat Is

You can best identify the breed of your Calico by looking at the general characteristics of your cat, as you would in order to identify any breed.

Check out the above list of breeds, paying particular attention to:

It’s worth knowing, however, that if you have a shorthaired Calico, you most likely have a cat that is a Domestic Shorthair.

Domestic Shorthair is the name for your average house cat, and these cats account for around 90% of cats in the USA.

If you have a longhaired Calico, you probably have a Maine Coon. The Maine Coon breed – also American Forest Cats – are the most popular longhaired cat.

Some breeds don’t accept Calico colorings as part of the official breed. Some examples are:

Just because your cat isn’t officially accepted as being part of a particular breed because of its colorful fur, though, it doesn’t mean you don’t have a Calico.

It just means you wouldn’t be allowed to showcase your cat at official events for that breed.

Where To Find a Calico Cat

You can find a calico cat in animal shelters, private homes, pet stores, or from a breeder. Be aware, though, that where you find your cat can significantly impact what you might have to pay for it.

The more expensive the breed, the more costly the Calico will be.

Some breeders will charge more for a Calico than for its solid-colored siblings: after all, you can’t breed a Calico – their gorgeous fur markings are a random (and some would say lucky) event.

A calico cat can cost next to nothing if you are lucky enough to adopt one from an animal shelter or a private home.

And you’ll be providing a loving home for a fortunate animal, too.

How Long Do Calico Cats Live?

Most Calicos live from 12 to 16 years. Most indoor cats have a life expectancy of 10 to 15 years, so Calicos don’t necessarily live longer or shorter lives than other types of cats.

The biggest differentiating factor that affects the lifespan of Calicos – all other conditions being equal – is whether you have a male or female Calico.

Because male Calicos have Klinefelter’s Syndrome from the extra X chromosome, they have an increased risk of diabetes, joint pain, and broken bones.

Knowing this in advance can help you keep on top of your cat’s health with regular vet check-ups and a nutritious diet so that they can enjoy an excellent quality of life.

Calico cats come in various breeds, but they all share one thing in common – the tri-color coat!

Although, unlike in Tuxedos or Tortoiseshells, their coats can come in different colors.

Just take that into consideration when searching, if you are still keen on adopting one!