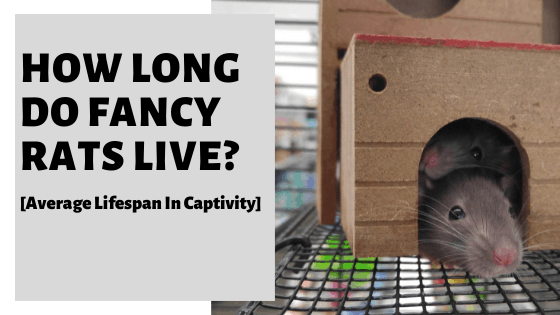 If you are looking to get a rat as a pet, chances are the Fancy rat will be in the running. Besides, it’s of the main varieties you’ll often find available. They are bred specifically for domestication, after all. But how long do they typically live for? Here is everything you need to know.

Not particularly long then.

In fact, Fancy Rats are one of the fastest aging rodents in the world.

But what does that mean for you as a potential new owner?

Read on to find out!

How Long Do Fancy Rats Live As Pets?

The average life expectancy of a Fancy rat kept in captivity is between 30 and 33 months for females and between 33 and 36 months for males. They, therefore, have the distinction of being the pets that age the fastest.

It may not seem a lot, but it is almost triple that of their wild counterparts.

They seldom live beyond one year, although there are rare exceptions that they do manage to live up to 2/3 years.

In contrast, there is a very low mortality rate amongst domesticated Fancy Rats who are a year and a half old.

It is only then that they begin to get diseases that are strangely gender-specific.

For example, females get tumors in the mammary glands while males suffer from kidney problems usually brought on by diabetes.

When animals are domesticated, their lifespan generally increases.

This is a result of removing them from life-threatening situations and complications such as predators and certain diseases.

A survey was done in 2004 by Angela Clark, who took obituary notices from the United Kingdom Journal of the National Fancy Rat Society.

She determined that, on average, Fancy Rats lived for 21.6 months, with 95% of them having died before they were three years old.

And this has actually been extended.

A Fancy Rats lifespan has evolved and lengthened through the years of domestication.

A century ago, their maximum life expectancy was two years.

This has now been extended to an average of 3 years, with many experts doing studies on Fancy Rats experimenting on ways to increase their lifespan.

Some of the results will be discussed further below.

An interesting theory as to why Fancy Rats have such a short lifespan is linked to their life expectancy in the wild.

Mice and rats will usually be killed by predators within a few months or a year of their birth.

As such, they do not put a lot of energy into repairing or preventing damage that would naturally occur.

It is the natural version of the juice not being worth the squeeze – wild rats won’t be around long enough to benefit from all the energy needed to maintain themselves physically.

It is a bad investment, resulting in a quicker aging process which has carried over into domesticated Fancy Rats.

There are many things that influence a Fancy Rat’s lifespan – genetics, breeding, diet, and environment being chief amongst them.

Let us now explore each one of them:

As you with any living animal, there is undoubtedly a genetic factor going on here.

Some Fancy rats will inherit superior genes for longevity than others; that’s just the way it is.

Then there are genes that express themselves differently in different environments; some more favorably, others less so.

Ultimately, the genes that a rat inherits depend on the rats they are bred from.

This leads us on to the next one.

Inbreeding tends to perpetuate hereditary diseases that may be present in either parent.

Inexperienced breeders will over-breed their Fancy rats, leading to many health complications.

For example, if you were to decide to breed Dumbo Rats (a variety of Fancy Rat that has big ears owing to a recessive gene), you would have to go through quite a number of breeding steps.

You would first need to breed a Dumbo male with a Dumbo female.

You then take one of the female litter and breed her with her Dumbo father.

She will then have a litter, approximately half of which will be Dumbos.

As you can see, it is very easy to cause inbreeding amongst Fancy Rats.

Your environment is exceptionally important when it comes to your rat’s health and longevity.

If you give your pets a calm environment and remove any possible causes of stress, they will automatically live longer.

In addition, keeping their cage and bedding clean and dry, giving them enough exercise as well as toys to stimulate them will prevent them from getting diseases which would ordinarily shorten their life.

As a matter of course, you will need to make sure your Fancy Rat has a proper diet.

As rats are omnivores, their diet needs to be made up of carbohydrates, protein, and fats.

If their daily food allowance is made up of more than 12%-20% of protein, your pet will begin to itch, and the subsequent scratching could cause scabs.

Taking the above dietary restrictions further, studies have been done on Fancy Rats, looking at their lifespan in light of restricting their calorie intake.

It was discovered nearly 70 years ago that if you follow a program called Caloric Restriction, your rat will not only live longer but will also not age as quickly as they normally would.

This will be discussed in more detail below.

How To Ensure A Pet Fancy Rat Reaches Their Life Expectancy

There is your bog-standard list of things you can do to make sure your Fancy Rat reaches its full life expectancy. Good diet, preventative measures in respect of illness, a clean and hygienic environment are all important.

You need to make sure that you feed your pet a rat-specific diet, in line with the percentages above.

To prevent disease, you need to catch it early.

Look for signs of illness in your rats, such as discharge from the nose and eyes or changes in color and smell of their urine.

Regular check-ups at the vet will also help identify symptoms of any disease if they are present, allowing you to begin treatment as soon as possible.

More interestingly, there is something that you can do to make sure your Fancy Rat lives as long or possibly longer than initially expected.

The concept of Caloric Restriction (CR) was mentioned earlier.

CR is what it sounds like – regularly reducing your rat’s daily intake of calories.

However, it is important to note that it is only the calories that are restricted and not the nutrients that your rat requires.

This is the only experimental theory proven to extend the lifespan of rats by decreasing the rate at which they age that manipulates the animal’s environment and not the animal itself.

You can use this on any pet you have, be they rodent or other, and it has been proven to slow down the aging process.

This is because CR prevents or delays the onset of age-related diseases, in particular cancer.

The change has proven to be remarkable, with some species lifespan increasing by nearly 50%.

CR studies often begin when the rat is very young, usually just after they have finished weaning, and carry on throughout their life.

We have learned that the aging process in rats is much faster than that of humans.

Various calculations have been made, and studies done to determine a rat’s age translated into human years.

It has been determined that, in general, rats age 27 times faster than humans do.

Interestingly, these figures vary depending on what phase of life your rat is in.

Rats are pregnant for 23 days, as opposed to 280 days for humans. This is accelerated by 12.

Rats are weaned by the time they are 34 days old.

On average, human babies are weaned by the time they are 180 days old, showing that rats wean five times faster than humans.

This difference accelerates to 12 times faster in the next phase – sexual maturity.

At this stage, the comparison can be made in years and not days. 1 human year is now equal to 4,3 rat days.

Adulthood is defined by the complete fusion of growth plates.

From the age of 7 months to around 15 months, rats age 36 times faster than humans.

The process speeds up again at 16 months, with 17 rat days being more or less equal to 17 rat days.

Just bear this all in mind if you do decide to keep one as a pet. Particularly in regards to sexual maturity.

Or otherwise, unless precautions are taking – you could result in a little of pups!

We hope that the above sheds some light on the lifespan of the Fancy Rat.

Ultimately, even with the best care and the best environment – they do not live particularly long.

That being said, that does not mean that you should not do all you can to meet their needs and ensure they live a happy life and reach their lifespan potential.

But most importantly, hopefully, this article has given you the best chance of spending the most time possible with your Fancy Rat – should you decide to get one!