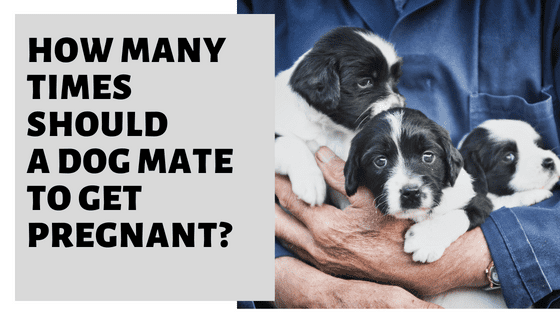 If you are trying to breed your female dog, you may be wondering how many times she’ll need to mate to get pregnant. Is one mating enough, or will they need a few mating sessions to conceive? And if you really want to increase the chances, could you mate your dog several times per day? And how do you know if dog mating is successful? Here are the answers to all of those questions and much more.

So, how many times should a dog mate to get pregnant? A female dog should ideally mate three times during the fertile part of her heat cycle (the estrus) in order to get pregnant, although up to 40 percent of female dogs can get pregnant after just one mating session.

Of course, a lot depends on the dogs, their age, health, and virility, to name but a few.

Then there are other factors such as timings and when and how the dogs end up mating.

With this in mind, let’s continue to explore the chances and likelihood of a female dog falling pregnant and what it truly takes to do so.

Learn how to breed your dog, the right way:

How to Breed Dogs,
Check Price On Amazon

Is One Mating Enough For A Dog To Get Pregnant?

In as many as 40 percent of female dogs, one mating is enough to get pregnant, provided she is in the fertile part of her cycle (the estrus).

When One Mating Can Be Enough

If your female dog is in the estrus part of her cycle, one mating can be enough for her to get pregnant.

Estrus takes place between the 9th and 15th day from the time the female dog has started bleeding.

You can usually tell if the female has entered estrus because the discharge changes from being mostly blood-colored to a clear or straw-like color.

The female will often flag her tail to allow a male dog to mount her, which is why estrus is also referred to as the ‘standing heat’ period.

And as much as 40 percent of the time, one mating is enough for the female to get pregnant.

When Not to Mate Your Female Dog

During Her First Cycle

It is crucial not to allow a female to become pregnant during her first cycle. She can become pregnant, but she’ll be too young to know how to raise her puppies properly.

In addition, there are certain health risks for both the mother and her pups if she is bred too early.

Male puppies can start mating as early as 6 to 12 months of age, depending on the breed, but that doesn’t mean that they should.

Usually, the smaller the dog, the sooner he will reach maturity.

Some large breeds don’t reach their full-grown sizes until they are 2 years old, so it’s worth bearing in mind the breed of your dogs when considering breeding them.

When She’s Around Family Male Dogs

For the health of the puppies, it’s essential to mate your female dog with someone outside of her immediate family.

You’ll know when the male dogs are looking to mate because they will:

If Your Dog Has Significant Health or Behavioral Problems

Dogs with behavioral issues or health problems are highly likely to pass those problems onto their puppies.

Problems like anxiety or uncontrollable aggression can be passed down through a bloodline, so consider the health of your dog before breeding her.

If your female is in good health but is too stressed or afraid to allow a male dog to mate with her, you can consider artificial insemination.

Note: Some breeders use assisted mounting – usually to help the male dog get to where he needs to go. If the female isn’t keen to mate, particularly if she’s afraid, assisted mounting can cause her severe stress and trauma. In such cases, it’s kinder to resort to artificial insemination.

Do Dogs Need To Mate More Than Once To Get Pregnant?

Breeders say that ideally, you’ll want your dogs to mate three times to make sure the female falls pregnant. Some females will let male dogs mount them several times in the same week, whereas other females are more reticent to allow multiple matings.

Why Multiple Matings Are Recommended

Dogs don’t get pregnant with every mating, so usually, you will want your dogs to mate more than once to guarantee a pregnancy.

Most breeders recommend three ties (the period of mating when the dogs are locked together because the tip of the male’s penis has swollen to ‘lock’ inside the female’s vagina).

There is no ideal number for dog matings because:

Because some ties can last for up to 5, 10, 20, 30 or even 60 minutes, many breeders prefer to hold the dogs on their laps during the tie to help both animals stay comfortable.

Fortunately for many breeders, the average length of a tie is around 15 minutes.

The average length of time that a female will allow male dogs to mount her during her fertile period is 7 days.

Some females allow for fewer days, while others will let males mount them for more than a week: it depends on the individual female.

In terms of the length of time that estrus lasts, it varies from one dog to another.

Some females will be in estrus for less than a week, whereas others will have a longer estrus period of over 2 weeks.

Regardless of the number of days the female allows mounting, you will want to make the most of those limited days if you are after a healthy litter of puppies.

In addition, there are a few popular misconceptions about mating, such as:

Can Dogs Mate More Than Once A Day?

Dogs can mate more often than once a day, although most breeders want to allow for gaps between mountings. Most breeders let the dogs mate once every two days, but there are no restrictions for some dogs.

Why Dogs Can Mate More Than Once a Day

Some dogs will attempt to mate several times during a single day – as long as the female is allowing it and the male is up for it (and both are strong and healthy).

In those instances, there’s no reason why they can’t be allowed to mate several times in a day.

However, some females will get annoyed at some stage and will not want males to mount them more than once in a single day.

Usually, it’s the female dog who tires of mating first, but there are always exceptions based on the personalities of individual dogs.

Males tend to be more eager to mate than females. In fact, some females won’t want to mate at all, especially if the female is afraid, unsocial, or inexperienced.

Many male dogs will mate more than once per day, either with the same female or with multiple females.

Most breeders say that a male should only be allowed to mate with a female once or twice a day. If he mates too frequently over a short time period, the quality of his sperm can be depleted.

Some males can even fail to perform in subsequent sessions (even 2 days later) if they’ve worn themselves out on day one.

Those who own highly-prized breeding males will usually only allow them to mate once a day.

It’s also crucial to consider the age of your male dog when breeding him because:

Most dog breeding experts consider three matings in total to be sufficient to get a female pregnant, with the mating sessions being every other day for 6 consecutive days.

How Do You Know If A Dog Mating Is Successful?

The most obvious sign that a dog mating has been successful is if the female becomes pregnant. You will only know for sure that she’s pregnant anywhere from 20 to 28 days after the dog mating.

Within A Week After Mating

The things to watch for when checking if a dog mating is successful (the female is pregnant) happen shortly after the estrus cycle and are:

Further down the line – about 20 to 28 days after mating has taken place – you may notice:

By the third week of pregnancy, an experienced vet will be able to feel the embryos inside her uterus.

They will be very small and will feel like walnuts, as they’ll be about 1 cm long. You won’t know just yet how many puppies there will be, though.

Note: Some female dogs can mimic a pregnancy, so the only way to know for sure if your female is pregnant is by seeing your vet about 4 weeks (28 days) after mating has taken place.

At this stage, your vet will most likely use ultrasound to see the gestational sacs and heartbeats of the puppies.

The earliest that an ultrasound can be done is on day 39 – about 5 weeks after mating.

After 45 days, most vets recommend having x-rays done to be able to clearly count the number of puppies as well as look for potential deformities or other problems.

Sometimes, though, your vet may not be sure of the exact number of puppies to expect until about seven days before they are due!

If you are looking to breed your dog, then I would strongly suggest researching as much as you can before you proceed.

You want to know exactly what to expect and when. What to do, and why.

This best-selling and highly-rated book on Amazon is an absolute must-have for these kinds of reasons.

It has incredibly useful diagrams and images that will not only improve the chances of your dog falling pregnant but will also help guide you throughout.

Other than this, contacting some breeders and asking them the questions you may have, along with speaking with a vet and getting your dog checked over, will set you in good stead.

Related guides you may want to check out: