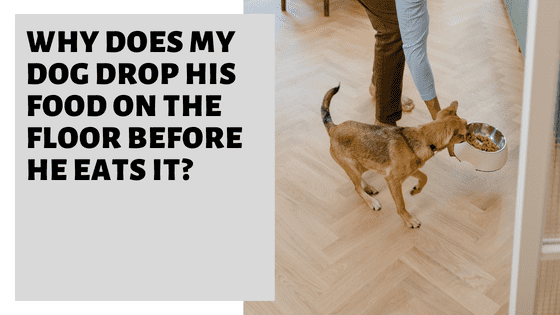 You may have noticed that your dog insists on dropping his food on the floor before he eats it. You carefully add your dog’s food to his bowl and place it neatly. Next, you notice your dog dropping the food out of his mouth onto the floor. It’s a little frustrating right? Besides, it requires some tidying up. Why do dogs even do this? Can you stop them from doing it? Well, here is everything you’ll want to know.

As you can see, it could be one of the numerous reasons.

Or several contributing all at once.

So let’s delve deeper into each one in the section below so you can try and figure out why your dog is doing this, before turning to how to successfully address it!

Your dog may drop his food on the floor before eating out of an instinctive urge to protect his food or because he wants companionship. Other times it’s the type of bowl that’s the problem.

He Wants To Keep His Food Safe

Some dogs will carry their food out of the bowl to drop it on the floor out of an instinctive desire to want to protect their food so that it doesn’t get eaten by another dog.

Because they have descended from wolves who live in groups, dogs have a powerful pack mentality. Some dogs instinctively want to keep their food to themselves so that they are sure to get enough to eat.

In a pack of wild dogs, the subordinate pack members would have to carry their food away so that the dominant dogs didn’t eat it.

Dogs lower on the ladder of authority within a pack won’t want to fight the leaders, so they’ll drag their food away before eating it.

If you’ve observed packs of dogs making a kill in the wild, you’ll usually see the outranked dogs snagging pieces of meat from the carcass and running away with it.

Fighting a stronger dog could be very dangerous, so a dog who puts his food out of sight is doing so to stay safe.

If you have several dogs in your house, your dog is likely carrying his food away to keep it safe from the other dogs. He may even want to hide it as another means of guaranteeing he’ll have enough to eat.

Think of a large family: sometimes those who eat the fastest get the most food!

Your Dog Wants Company While He Eats

Like human beings, dogs get lonely, and some prefer to eat while accompanied. It could be that your dog is carrying food to you – or another dog – to not eat alone.

Even if you aren’t eating, your dog may be happier just seeing or hearing you while he eats. You might find your dog carries his food to wherever you are.

Dogs are often fed at different times from the rest of the family. If your dog brings his food to where you are and drops it there before eating it, he may be communicating to you that he wants to eat with the family.

Your Dog Is Storing Food For Later

Some dogs will tend to want to store their food for later – in these cases, he won’t just take the food out of his bowl. He’ll carry it away and hide it to eat another time, which can be very problematic if you step on it or if you feed him wet food!

In the wild, some dogs will create a source of stored food for later because instinctively, they know that food isn’t always easy to come by.

Your domesticated dog may be acting out of instinct – or if there are other dogs at home, he may feel he needs to keep food for himself for later.

If you discover dog food in random places in your home, your dog may be creating his stash.

Sometimes the bowl is the problem, especially if it’s a metal bowl, as some dogs don’t like the sound of their teeth scraping the metal surface.

Some dogs are even frightened by the noises these dishes make – if your dog wears dog tags, the tags striking the bowl can startle him.

He may want to pick up the food and take it somewhere else to eat without all that noise.

Can You Stop A Dog From Dropping Food Before Eating?

Here are some instances in which you can probably stop your dog dropping his food before eating it.

Sometimes your dog doesn’t like his new food or even how it’s presented.

For instance, one dog who came home from a hospital stay refused to eat food when presented as one large portion.

He was happy to eat from his bowl as long as he was served smaller portions.

If Your Dog Is Playing With His Food

Some dogs start playing with their food because they aren’t particularly hungry. You may see them not only pick up the food and drop it on the floor, but they’ll also push their food bowl around a few times.

By making sure your dog is hungry and isn’t being overfed, you may be able to stop him from playing with his food.

Sometimes a dog will pick up the food from his bowl and drop it on the floor because there’s something in his bowl that he doesn’t like.

He’ll want to get the food away from whatever that something is before he eats it.

Check your dog’s food bowl and make sure it’s always nice and clean before you feed him.

Should You Stop Your Dog Dropping Their Food Before They Eat?

If your dog is dropping his food before he eats because of the type or amount of food he’s getting, the hygiene of his bowl, or other practical reasons, you will want to address those causes. It’s more important to change what you can (type of bowl, amount of food, etc.) than to try and change instinctive behavior like hoarding or hiding food.

If you have addressed the other potential causes of your dog dropping his food (see below), it may be that you need to look at training your dog to eat from his bowl.

Be sure you’ve got the type of bowl that he likes, though, before undertaking this training.

I’ve listed below the best sellers in each category on Amazon, should you want to get a new one: 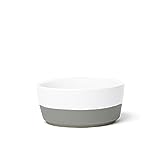 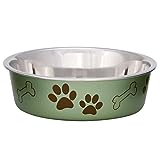 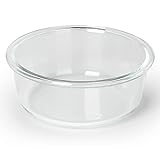 Once you have the best kind of bowl for your dog, here’s how you can try to retrain him to appreciate his food from the bowl:

Note: The above method is best done when you know your dog is not suffering from loneliness or stress. Be sure you have considered all of the possible causes for his behavior and you’ve addressed any problems (e.g., try feeding him separately if there are other dogs around so that he doesn’t have to contend with other factors that could tempt him to carry his food away).

How Do You Stop A Dog Dropping Their Food Before Eating

You can do several things to try and stop your dog from dropping his food before eating, depending on the reasons for this behavior. Sometimes you can stop it, and sometimes you probably can’t.

If Your Dog Is Hiding Food From Other Dogs

If you suspect your dog wants to protect his food from other dogs in the family, try feeding the dogs separately.

Sometimes that’s enough to make a difference, and sometimes it isn’t: it depends on the individual dog.

If you suspect your dog is hiding food from imaginary dogs – in other words, if he’s feeling protective over his food even when he’s on his own – then you could try using a crate or blocking the exits from the room.

Putting up blocks won’t stop your dog if he’s dropping the food on the floor next to his bowl.

If Your Dog Wants To Eat With Company

If your dog wants to be part of the family, try feeding him at the same time as everyone else, with his bowl in the same room.

You can try sitting or standing near your dog while he eats. Sometimes having you nearby is enough for your dog to relax and eat from his bowl.

If your dog has a metal bowl and you notice him carrying food away from it, there can be a simple solution. Swap the metal bowl for a plastic one to see if that makes a difference.

Some people opt for paper plates, but depending on the food you feed your dog, you could be looking at a lot of mess (not to mention the amount of paper waste).

If Your Dog is Creating His Own Food Stash

If you suspect your dog is hiding food to eat later, you can try to make sure you’re not overfeeding him.

If he’s really hungry, chances are he’ll eat all of his food rather than save some for later.

If You Are Concerned

If you can’t seem to figure out the reasons behind your dog’s behavior, or if you have any concerns about it, contact your vet.

Your vet may have some ideas as to what’s going on: and if not, they can point you to a dog behaviorist who may be able to help.

If your dog is happy overall, there’s no cause for concern – and you may just have to put up with the behavior.

You can block off access to other parts of the house (see above) where you don’t want him carrying his food, but apart from that, there isn’t much else you can do in some cases.

So, there you have it.

The potential reasons for food floor eating and some practical and relatively simple things you can do to try and stop them from doing so.

Monitor your dog closely, try to get an understanding of what the issue could be from them, and then go from there.