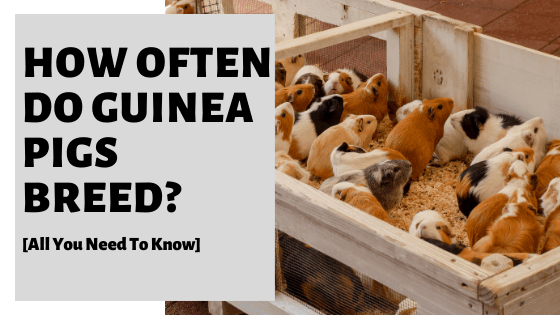 Whether you have owned guinea pigs for a while or are thinking of starting a guinea pig family of your own, it’s important to be well informed about the basics of guinea pig breeding. It all starts with understanding how these rodents are biologically primed to do so.

So, how often do Guinea Pigs breed? Guinea pigs breed a lot and can give birth to up to 5 litters per year. There are 2 to 4 babies in a litter on average, but there can be as many as 8 pups! So, a guinea pig could have anywhere between 10-40 guinea pigs per year if bred consistently.

Breeding guinea pigs is a rewarding process, and it’s fantastic to be a part of one of life’s great miracles.

After all, guinea pigs are friendly and sociable pets, so who wouldn’t want more of them!

There are many reasons why you might want to breed your guinea pigs.

Some owners simply want more of these fascinating creatures to care for, while others may want to sell the baby guinea pigs for a profit or to give them to a friend.

However, breeding them doesn’t come without its potential complications and, as such, shouldn’t be undertaken lightly or without preparation.

Guinea pig breeding should be a carefully considered process to ensure that sow, boar, and pups are happy and healthy throughout.

A responsible guinea pig breeder should be aware of the basic fundamentals such as the minimum weight and age requirements of the sow, how many babies she will likely have, and how long the gestation period is, to name a few.

By the end of this article, you should be more than ready to start breeding your guinea pigs safely and responsibly!

How Many Babies Do Guinea Pigs Have?

Guinea pigs usually give birth to anywhere between 1-6 offspring, with the average litter size usually ranging between 2-4 pups. The number of pups a sow gives birth to will be affected by a number of factors including genetics, age of sow, nutrition, stress and boar fertility.

The largest litter size ever recorded was 9 pups!

It is often the case that the larger the litter size, the smaller each individual baby guinea pig will be at birth.

The litter size also tends to decrease as the sow gets older; a young guinea pig having her first litter will likely give birth to more pups than a 2 year old guinea pig who has had multiple litters before.

Labour usually lasts around 30 minutes and in most guinea pigs will go smoothly without the need for intervention as long has they have been bred prior to the age of 7 months – but we’ll get to that later!

If your guinea pig appears to be struggling to give birth or there a large period of time between the delivery of each individual pup then contact your vet immediately.

How Long Does It Take For Guinea Pigs To Mate?

You may think that putting a male and female guinea pig together will result in fast breeding, but that isn’t always the case. Just because a boar and sow are in close proximity to each other doesn’t mean that they will mate; the situation is a little more complex.

Whether two guinea pigs of the opposite sex will mate depends on what stage of the reproductive cycle the female is in.

Like other mammals, the sow will fluctuate between times of high and low fertility – the entire cycle lasting about 16 days.

However, it is only for about 8 hours of this cycle that the female will be receptive to the male and allow him to mate with her – this is referred to as ‘being in heat’.

When in heat the sow will display signs such as a swollen vulva, increased activity, chasing cage mates and putting her rump in the air.

Keeping a male and female guinea pig together for at least 16 days should therefore result in mating.

The actual mating process usually only lasts a few minutes.

Another important consideration is how old the guinea pigs you wish to mate are.

In order for mating to occur and be successful, both the boar and sow must have reached sexual maturity.

Boars typically reach sexual maturity and can mate at 2-3 months of age whereas females sexually mature at about 2 months of age.

A sow should be at least 400g before she is mated.

The time of the year can also have an impact on whether mating will occur; females come into heat more commonly during the spring months although they can still be fertile at other times of the year.

If you are intending to breed from your female guinea pig it is also important to be aware that she must be mated before 7 months of age otherwise serious problems with giving birth may be encountered, known as dystocia.

These problems can be life-threatening if left unattended.

After 7 months of age with no mating, the sow’s pelvic bones fuse and the pelvic canal will not be wide enough to allow the passage of the foetus during parturition, likely resulting on the need of an emergency caesarean section procedure.

Signs of dystocia include excessive bleeding from the vulva and prolonged straining; parturition shouldn’t last longer than 1 hour.

Take the sow to your local vets immediately if this is the case.

Do Guinea Pigs Get Pregnant Easily?

Provided the conditions are met and the sow is mated during her fertile window, the success rate of the sow becoming pregnant should be high.

However, it is important to be aware of other factors that may play a role in a female guinea pig getting pregnant and successfully maintaining pregnancy.

Once pregnant, the gestation period of a guinea pig is between 59-72 days.

Concurrent stress or disease will reduce the fertility of both the sow and the boar.

To ensure the best chance of success when it comes to getting your female guinea pig pregnant be sure to provide a balanced diet, a clean, disease-free enclosure, and an environment free of stress such as bullying from more dominant guinea pigs.

How Often Do Guinea Pigs Go Into Heat?

Female guinea pigs go into heat on average every 15-17 days and the time in which she is receptive to the male is usually only 8-12 hours.

The signs of heat include enlargement and swelling of the vulva, chasing other guinea pigs around the cage, increased movements of her hips, making low-pitched noises and putting her rump in the air.

While bleeding from the vulva can be a sign of heat in other mammals, it is important to be aware that bleeding is never normal for a female guinea pig.

If your sow is bleeding then she needs to be taken to your local vet as soon as possible as she may have developed an infection of the uterus or have urinary tract issues such as a urinary tract infection.

While guinea pigs may retain the instinct to breed later in life there comes a point where breeding and subsequent pregnancy may introduce unwanted complications. So, although they may only stop breeding when they are much older, they generally shouldn’t be bred any later than 2 years old.

As long as a female guinea pig gives birth prior to 7 months of age, her pelvis will be wide enough to give birth at subsequent times later in her life.

A sow can have up to 5 litters per year.

Female guinea pigs remain fertile until they are 4 years old, but the optimal breeding window is between 3-24 months of age, after this the litter sizes decrease, and the complications related to giving birth increase substantially.

It is always recommended to have your guinea pigs neutered after you have finished breeding from them.

Leaving your sow entire can increase the risk of ovarian or uterine cancer and life-threatening infection of the uterus known as pyometra.

As you can see breeding guinea pigs isn’t always a walk in the park and can result in serious complications.

Therefore, breeding shouldn’t be taken lightly, and care should be taken to make sure your guinea pigs are the right age and weight and in optimal health before allowing them to breed.

Only breed from your guinea pigs if you have good reason to do so and be sure to find good homes for the offspring before allowing breeding to occur.

When done correctly, however, breeding guinea pigs can be very rewarding and result in beautiful healthy offspring.