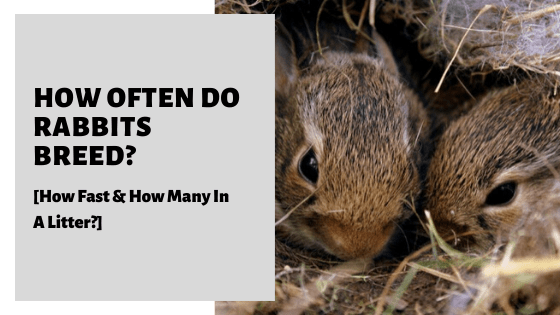 If you own multiple rabbits you may want to know how often they breed. This is especially important if you are have both males or females, or are looking to introduce a rabbit of the opposite sex into the hutch . Maybe you are not an rabbit owner, and just naturally inquisitive due to the old age saying around rabbits and breeding. Either way, I have conducted some extensive research into the topic. I would like to share that information with you here today.

So, how often do rabbits breed? Rabbits breed a lot and do so all year round. A healthy female rabbit will get pregnant every time she mates with a male rabbit. Doe’s (female rabbits) have two uterus’s which means they can give birth while pregnant with the next litter and have the ability to conceive any time of the year. Does can also have up to 13 litters per year, although this is not ideal for their health.

Let us now explore the topic further, looking at how fast rabbits can breed, how many rabbits you can expect to see in a litter and how many litters can rabbits have per year.

How Fast Do Rabbits Breed?

A doe has two uterus’s, which means she can give birth while being pregnant with the next litter – they are very prolific breeders, which is why you if you keep them as pets you must keep males apart from females, and they must be spayed or neutered.

Both male and female rabbits have high libidos, with males having a slight edge over the female.

A doe can become pregnant as early as 12 weeks of age, although this is not good for her health.

Rabbits breed a lot and do all year round, with the ability to conceive any time of the year, although, milder temperatures of the spring and fall facilitate breeding much better than colder temperatures.

A female rabbit is physically ready to conceive within 8 hours of meeting a male rabbit – this is known as induced ovulation.

Females start to nest once they’re pregnant. They will line their nest with fur to make it warm and comfortable, and become protective and territorial of their space, this is one of the earliest signs of pregnancy. However, it’s not necessarily an accurate way to determine a pregnancy.

Sometimes they can experience a false pregnancy while building a nest. Female rabbits will gestate anywhere between 28 – 33 days, any longer than 33 days is an indication of a false pregnancy or possibly, one or all of the litter died inside their mother.

How Many Rabbits In A Litter?

An average sized litter (also known as kits ) is a litter of 6, although they can have anywhere between 1 to 14 baby bunnies – especially in their first pregnancy.

It depends on the species and their size as well; Dwarf bunnies give birth to only 2 kits, medium rabbits give birth to 6 kits, and the larger bunnies have up to 14 kits.

Baby rabbits are very fragile, in the wild, one of three babies die, predators and weather are primary factors, and sometimes mothers abandon their offspring, this may seem cruel, but, the laws of nature are unsympathetic to the weak, and a doe will prioritize her strong babies over the weaker ones.

Baby rabbits in a domestic environment have a higher rate of mortality, if they are taken from their mothers and raised by humans, who don’t know how to care for infants as well.

How Many Litters Can A Rabbit Have In A Year?

Does can have up to 13 litters per year, although this is not ideal for a doe’s health, the safest average is 8 to 10 litters a year.

The average number of offspring is between 48-60 in one year and they are capable of breeding throughout their entire life, this means a female can have an average of 336 – 600 offspring in her lifetime if not properly cared for.

As a rabbit breeder you need to consider the health of your does, and not allow them to breed before they’re 6 months old.

For larger does you should wait a year, but don’t leave it longer than that, as they can develop excessive amounts of fat around their ovaries – which can lead to numerous health issues.

Don’t allow a medium-sized rabbit to have more than 10 litter a year, and don’t let an old doe breed, retire a breeding female after they have had a few litters.

Life expectancy for a pet rabbit, is 7 -10 years, but they can live up to 15 years. In the wild, life expectancy is much shorter, lasting only a few years. Prolific breeding is the only means rabbits have of combating extinction.

Do Rabbits Get Pregnant Every Time They Mate?

A healthy female rabbit will get pregnant every time she mates with a male rabbit.

A female will release eggs every time she mates but it really depends on how quickly the male releases sperm inside the female.

Does do not have periods or go through heat, they have induced ovulation and this is how they are able to get pregnant every time they mate.

As a rabbit breeder, you need to be familiar with their mating process and the best way to care for a female at this time:

Temperature can have an enormous effect on their reproductive success, temperatures higher than 85 degrees F can cause male rabbits to be sterile, especially if they have been exposed to those temperatures for more than a week, this can lead to sterility.

Sterility can last up to ninety days, which can be a drain on time and resources as no matter how many times a buck will mate with a doe she won’t conceive.

You will need to take measures to achieve conception – place males in cool temperatures to increase their sperm count, and carefully trim the fur from their scrotal area, this also helps to keep their genitals cooler.

If you are considerate towards the doe and the buck, rest assured, you will have healthy litter all year round.

You need to be aware of this from the outset, along with some other considerations outlined above, to ensure that your rabbits do not breed excessively and beyond your capacity to house and look after them.

There is a reason why “breeds like rabbits” is a saying.