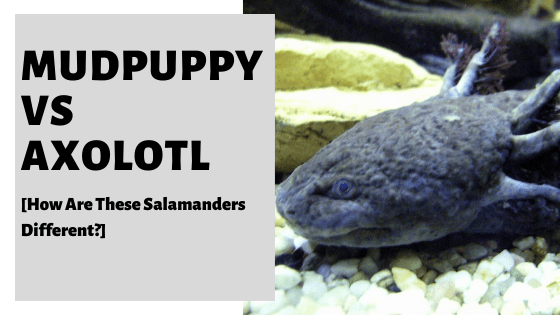 At first glance, it’s easy to mistake a Mudpuppy with an Axolotl. And vice versa. But upon closer inspection, you can start to tell them apart. It naturally raises the question; what is the difference between these two salamanders? Let’s find out.

So, what is the difference between a Mudpuppy vs. Axolotl? While Mudpuppies and Axolotls are both fully aquatic salamanders, they are classified as different species from different families. This is because they have strikingly different characteristics, including their appearance, body dimensions, general size, coloring, and typical lifespan.

They may resemble one another, but these really are distinctive.

And you’ll soon see why in the following sections!

What Is A Mudpuppy?

A Mudpuppy (scientific name Necturus maculosus) is a species of Salamander from the genus (family) Necturus.

They are fully aquatic, native to North American lakes, rivers, and other natural bodies of water.

Mudpuppies retain their external gills, which they use extensively to breathe (along with some minor skin and lung respiration).

Mudpuppies are commonly brown in color and grow to a size of around 13-17″. They generally live for around 20 years when kept in captivity, 10-15 in the wild.

These specific salamanders are nocturnal and will only appear during the day if water is dark and cloudy.

The diet of a mudpuppy is carnivorous, and it ranges from insects to worms. Food is typically any living prey they come across and can safely fit into their mouths.

What Is An Axolotl?

An Axolotl (scientific name Ambystoma mexicanum) is a different species of Salamander from the genus (family) Ambystoma.

They are fully aquatic but are native to South America, specifically Lake Xochimilco in Mexico City.

Axolotls also retain their external gills, which they use extensively to breathe (along with some minor skin and lung respiration).

Axolotls typically reach between 6-18″, although the average Axolotl will grow to around 9″ in length.

They generally live for around 12-15 years when kept in captivity, 6-10 years in the wild.

Axolotls are critically endangered in the wild, although they are used considerably in scientific research. This is because of their regeneration abilities.

The diet of an Axolotl is equally carnivorous, again ranging from small insects to snails to worms.

Food is typically any living prey they come across and can safely fit into their mouths.

Mudpuppies and Axolotls’ main similarity is that they are neotenic; they retain their juvenile features as adults, develop very slowly, and sexually mature while still in a mainly larval state.

In other words, they reach sexual maturity without undergoing metamorphosis (transformation from an immature form to an adult).

This is true of all salamander families, and it is hypothesized that this is a survival mechanism.

This allows them to survive in environments where food is sparse. They can survive on lower quality and quantity of food.

Due to neoteny, both Mudpuppies and Axolotls never lose their gills, nor leave the water.

This is different from most species of salamanders who leave their gills when they transition to adulthood and become land dwellers.

It is for this reason that a Mudpuppy or Axolotl should rarely be handled; doing so can disrupt the protective slime on their skin and cause illness/disease.

Mudpuppies and Axolotls also share a similar diet and feeding pattern, both in the wild and when kept in captivity.

What Is The Difference Between An Axolotl And A Mudpuppy?

Axolotls and Mudpuppies are from a different, distinct family of salamanders. While they may show a small resemblance, these are very different native to separate continents.

As such, there is a range of differences between them. Let us now look at these in further detail:

The average Mudpuppy is much larger than your average Axolotl.

A Mudpuppy is much longer, typically reaching 13-17″ inches in length.

Whereas an Axolotl tends to reach 6-9″ (there are reports of 18″ axolotls, but these are very rare).

The body dimensions of a Mudpuppy and Axolotl are drastically different too.

Mudpuppies have a slimmer, pointer, and arrow-shaped head. The eyes protrude upward (just as is the case in frogs).

Whereas the head of an Axolotl is much wider, and their eyes do not protrude upward in the same fashion.

Mudpuppies are generally slimmer in body shape too.

Mudpuppies are known for live longer than Axolotls, on average.

The typical Mudpuppy will live upwards of 20 years. Axolotls typically reach 15 years at most.

Axolotls are available in considerably more color morphs than Mudpuppies.

It is hypothesized that this is the result of intensive artificial selection.

In other words, Axolotls have been kept bred much more extensively and kept much more commonly in captivity.

And with each selective breeding, the color morphs of Axolotls have been changed as favorable morphs are selected.

As such, you can find Axolotls in various colors, from pink to gold, to grey.

In fact, it is unlikely that golden (albino) strains would event naturally exist in the wild. Besides, this is not even a favorable color for survival.

Mudpuppies are, however, almost predominantly found in a rusty brown color.

Owning a Mudpuppy and Axolotl is equally very different. Mudpuppies are typically considered much more exotic than Axolotls.

Axolotls are much more commonly found and available than Mudpuppies.

As such, they are generally easier to get as a pet.

In fact, the breeding of Mudpuppies is not very common, and as such, they’re not typically commercially available.

For this reason, Mudpuppies being sold as pets are much more likely to be wild-caught rather than purposeful captive breeding.

And for these reasons, Axolotls are much easier to get information and help with, especially from other fellow owners.

The living requirements and quarters of Mudpuppies and Axolotls are very different too.

Mudpuppies are very sensitive to water quality. It must be very clean and free-flowing. And the temperature must be suitable too.

Mudpuppies are also more aggressive than Axolotls, so housing with other tank mates is naturally more challenging.

And at the same time, Mudpuppies live longer and grow larger, so the need for a bigger tank and extended husbandry must be considered.

Axolotls are known for being much easier to breed than Mudpuppies and other salamander species.

Can You Keep A Mudpuppy And Axolotl Together?

While you may be able to house a Mudpuppy and an Axolotl together safely; it is strongly advised that you do not. Mudpuppies and Axolotls are different species with their own unique needs and preferences.

In fact, it is advised that you do not even house two axolotls together; unless you are very mindful of their age, sex, and size and manipulate the living arrangements accordingly.

If you were to keep them together, you would need to ensure the following at the very least:

There are several reports from owners who, having initially housed them together, transitioned over to separate living quarters.

And it appears that this is partly due to the aggression and territorial nature that Mudpuppies have.

And as they are bigger, they are likely to exercise it.

One owner recounts that their Axolotl was always missing the tip of the tail when they shared an aquarium with a Mudpuppy.

Even though the Mudpuppy and Axolotl appeared to co-exist peacefully; acting seemingly indifferent most of the time.

It was not until they were separated that the tail was able to regenerate fully.

In reality, while they may be able to be housed together, is it ideal? Most likely not.

Despite their initial resemblance, Mudpuppies and Axolotls are actually very different. It’s like with Water Dogs.

Besides, they are classified and characterized as separate salamander species, after all.

In fact, these salamanders differ in almost every way possible upon closer inspection.

From a pet ownership perspective, there will be some similarities.

Minimized holding, the need to keep them in a sufficiently sized aquarium, and feeding live prey.

But ultimately, you would be looking and caring for a very different salamander.

So if you want both, go for it. Just be sure to keep them in separate tanks!