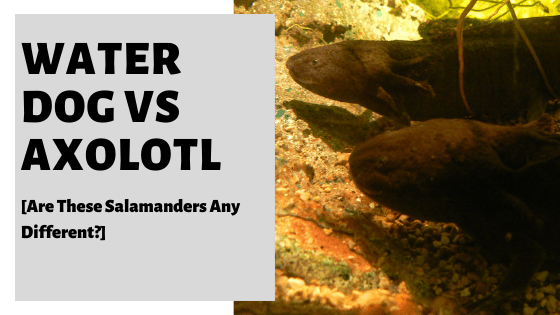 Water Dogs and Axolotls; are these the same or are there drastic differences between the two? I spent some time researching to find out for good!

So, what is the difference between a Water Dog vs. an Axolotl? Water Dogs and Axolotls are different species of salamander. They are native to different continents, physically very different, and have very different needs. Water Dogs eventually metamorphose into terrestrial salamanders, walking on land, whereas Axolotls remain fully aquatic.

While both being larval forms of salamanders, there is quite a difference between the two.

And you’ll soon see why in the following sections!

Is A Water Dog An Axolotl?

But, there are certainly reasons why there is some confusion.

And it has a lot to do with semantics and how the terms are applied.

For instance, “Water Dog” is quite a generic term – it is often applied loosely to several different animals. Specifically, those are aquatic and in lizard-like form.

At the same time; the word “Axolotl” directly translates to “Water Dog” in Nahuatl (the language of the ancient Mexicans).

That being said, if the terms are being applied more accurately and of our current understanding; these are certainly separate species.

As we will now find out why.

What Is The Difference Between A Water Dog And An Axolotl?

And there are quite a few reasons why they are classified in separate families.

Let us now take a closer look at them.

Water Dogs are native to Northern America; including both the United States and Canada.

Axolotls, on the other hand, are native to South America; specifically, Lake Xochimilco which underlies Mexico City.

While Axolotls are now routinely found across Northern America, this is the result of the exotic pet industry; where they are commonly bred to be kept in captivity.

Although, it must be said that they are not legal in all states, such as California.

While Water Dogs and Axolotls may share some similar physical characteristics, they are drastically different in appearance.

Water Dogs are commonly larger, ranging from 8-18″ in length.

This is compared to Axolotls which will predominantly grow to around 9″ in length.

At the same time, Water Dogs are much darker in color – often found in olive. And they are known to change color when they metamorphize (more on this below).

Selective breeding has also resulted in Axolotls being found and available in different colors. Leucistic (pink), Albino (golden), Axanthic (grey) being most common.

Water Dogs are not true aquatic salamanders. And while they have a longer larvae phase, they will eventually metamorphose.

This essentially means that they will begin and start life in water, but will readily develop into terrestrial adults.

This commonly happens around the 12-18 month mark.

At this time, their gills (which enable them to breathe in water) will shrink and their lungs will become fully functional.

This allows them to migrate over to land-living and only return to the water when it’s time to breed.

Axolotls on the other hand do not metamorphose and stay aquatic their entire lives.

Water Dogs have been known to live up to 25 years, whereas Axolotls typically live to around 15 years.

Owning and caring for a Water Dog will be a very different experience from owning an Axolotl. This is particularly true when they begin to metamorphose and any owner must be prepared for this change.

Let us now take a closer look at what owning each would look like:

Owning a Water dog will require two different homes; beginning with an aquarium and finishing up with a terrarium once they develop into terrestrial salamanders.

Nevertheless, a tank the size of around 15-20 gallons is best – which should provide them with sufficient space to roam.

While they are still aquatic, Water Dogs require a water temperature of between 60-75° Fahrenheit.

When metamorphosis begins a Water Dog will begin gravitating toward the surface to breathe. At this time the water level needs to be produced, along with providing a platform for them to access should they need to do so.

Once they transition completely to land, they will then need to be placed into a water-less terrarium.

From a dietary perspective, they do best when fed insects, tadpoles, shrimp and a variety of worms. Pelleted Koi pellets can also be provided.

Water Dogs should rarely if ever, be handled.

Owning an Axolotl is similar in some respects, although they will be kept in a suitable aquarium for the majority of their lives.

They equally should be afforded sufficient space, with a tank size of 20 gallons recommended.

Water temperatures are best kept at between 60-65° Fahrenheit, and the water should be routinely cleaned through the use of a filter, or regular water changes.

The diet of an Axolotl is very similar; and they are known to do well when fed mollusks, worms, insect larvae, crustaceans, and some fish.

Generally, anything they can fit into their mouths and swallow whole.

Again, Axolotls should rarely, if ever be handled – only when the water is being changed or they are being taken to a vet.

Can You Keep A Water Dog And Axolotl Together?

While it may be possible to house a Water Dog and Axolotl together, it is best advised to keep these species apart in separate tanks.

In fact, it comes strongly advised that you only ever keep one Water Dog or one Axolotl in a tank at any one time.

And here is why; they tend to do better when they are kept in isolation.

Besides, both Water Dogs and Axolotls are carnivores by nature.

And they are both opportunistic feeders; snapping at any moving possibly edible thing that can come their way.

Axolotls have been known to lose limbs and parts of their tails to this.

And some Water Dogs are quite aggressive and have been known to be cannibalistic. And due to their size, they could easily overpower an Axolotl.

And then there is the matter of the Metamorphosis.

When owning a Water Dog you will need to prepare for the transition to land.

And when doing so, you would need to begin to decrease the water level and provide a haulout area.

But this is not conducive, nor required for an Axolotl. In fact, it could even be dangerous.

So even if you were able to keep a Water Dog and Axolotl successfully during the early days of life, there will come a time when they will need to be separated.

With all these factors in mind, it is best and recommended to keep these two different salamanders apart.

Just like Mudpuppies, Water Dogs are often confused with Axolotls. And vice versa.

But these are very different salamanders.

And this has repercussions depending on if you decide to keep one, or several as pets.

And you need to be careful.

Water Dogs and Axolotls are commonly available in many pet stores.

And sometimes, they are even kept close together.

So you must be aware of the differences and the nuances if you are looking to make a purchase and take on either as a new pet!