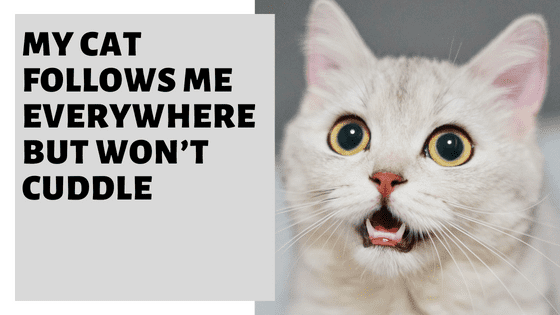 Have you noticed a pattern; your cat is keen to follow you around everywhere, yet is not open to a cuddle (or two)? It’s a little disappointing, right? Well, why do cats do this? Is it normal, and is there anything you can do to stop them from following you around as much or be more receptive to more cuddles? Well, this is all you are going to want to know and potentially implement…

So, why does my cat follow me everywhere but won’t cuddle’? Cats may follow their owners everywhere yet be hesitant to cuddle when they aren’t affectionate by nature. Other cats don’t like physical contact as a means of showing their affection, or they’ve had a bad experience in the past.

Thankfully, all is not lost – as we now discover as we continue to explore.

Why Does My Cat Follow Me But Won’t Cuddle?

There are several reasons your cat may be following you but not want to cuddle. It could be your cat just doesn’t like cuddles, or she’s more curious by nature. Other cats don’t like any form of physical contact, sometimes because they’ve had bad experiences in the past.

As we know, each cat has their own distinct personality.

Some cats just don’t like physical cuddles, which can be hard for their people to appreciate, as cats are so cute and soft!

Some feral, free-ranging cats today live either alone or in groups, and the jury is still out on how social they are as a whole.

Your Cat Is Curious

It could be your cat is more curious by nature, so they like being around you and seeing where you go and what you get up to, but they might not want cuddles.

And if they’re a very curious cat, they’ll possibly be more interested in smelling new scents and touching new things than having cuddles.

Your Female Cat Is Pregnant

Pregnant female cats can start following their people around everywhere because of hormonal changes in their bodies ramping up their maternal instincts, which manifest as a desire for affection.

A pregnant female may not want to cuddle, though, as she’s usually feeling more vulnerable.

You might check if your (unspayed) female cat is pregnant if she’s demonstrating any of the following:

Note: If you have recently had your female cat spayed, these maternal instincts from hormones may linger for a while.

Your Cat Wants Something From You

It could be your cat follows you around because they’re trying to tell you something, such as, ‘More food, please!’ or ‘I need to go outside!’

Our cats need us for everything from food to scooping out a litter tray, opening a door, or replenishing their water supply.

If your cat is following you and meowing, your cat is definitely trying to tell you something: meowing is a method of communication that cats reserve for human beings.

It’s possible that once you’ve attended to what they are asking for, they may be more receptive to a cuddle.

There are cats who feel unsafe or vulnerable if people try petting or even just touching them – even their beloved human families.

Some cats won’t want cuddles because they are sensitive, finding cuddles overstimulating.

Overstimulation is why some cats will allow cuddles up to a point before reacting aggressively as if to say, ‘No more, I can’t take it!’

Different cats have varying limits of the amount of touch they can tolerate – so repeated stroking, even in a favorite spot, can become overwhelming and even painful for your cat.

For touch-wary cats, the quieter your home is, and the more relaxed you are around your cat, the safer they will probably feel.

Some cats do change over time when they become more used to their environments, but this isn’t always the case.

There’s no guarantee your cat will go from a ‘hands off’ kitty to a ‘cuddle me’ kitty.

Your Cat Has Had Bad Experiences In The Past

If you have adopted a rescue cat, it could be they don’t like cuddles because they had a bad past experience while being petted in their previous home.

Your cat might have been handled too roughly by overenthusiastic young children or even mistreated by an irresponsible adult.

Cats have lots of DNA in common with their wild cousins, and they are easily frightened once they’ve had a dangerous encounter with anyone, human or beast.

If your cat has had unfortunate past experiences, you’ll have to work hard (and very slowly) to earn your cat’s trust.

If they are already following you around, that’s a positive sign – they might eventually accept physical touch.

There are, however, no guarantees when it comes to cats and their ability to recover from past stressful situations. We can only do the best we can to help them.

Is It Normal For A Cat To Follow Their Owners But Not Cuddle?

For some cats, it’s normal to follow their owners but not cuddle, particularly if they are skittish by nature or they don’t like the types of cuddles you’re offering. Just because your cat won’t let you cuddle her doesn’t mean she doesn’t love you – she just wants interaction on her terms.

Your Cat Is Skittish By Nature

If your cat is naturally skittish – either because of past experience or because they simply do not like cuddles – it’s normal for them to not want to cuddle, even if they follow you around.

It’s normal for cats to value their personal space, and for some cats, their space might stretch to a fairly wide area.

If your cat is following you around but not cuddling you, you may find they approach you a bit more when you are seated, reclining, or lying down.

Apprehensive cats can sometimes tolerate closer physical proximity with their people when they are asleep or lying down, as humans in this position are less threatening for cats.

Note: This is why when you come across a cat that doesn’t know you, it’s always best to crouch down to their level so that you appear smaller and less scary.

Some cats are fine with physical affection as long as it’s given on their terms and in ways they prefer.

It could be your cat likes something different from what you’re offering.

Here are some types of cuddles that many cats don’t like:

Your Cat Has Separation Anxiety

Contrary to what you might think, a cat with separation anxiety can be following you everywhere in her desire to have you close by, yet not want cuddles.

Your cat may be stressed to the point where they are highly anxious and need you close by.

Separation anxiety can come with other signs in addition to your cat following you, such as:

If your cat is following you but not cuddling you, and you want to be able to stroke them, you might not want to get her to stop following you, as this is a sign of affection. If your cat has separation anxiety, you’ll need to address the cause of that anxiety to ease your cat’s suffering.

How To Get Your Cat To Stop Following You

If you do want your cat to stop following you, this won’t mean they’ll be more open to cuddles – most likely the opposite.

Note: If your cat is meowing while they are following you, don’t ignore them or try to get them to stop – they want something. Thery could even be ill – so check that their needs are being met (see above).

It’s essential to find the cause of your cat following you:

If it’s none of the above reasons, your cat is most likely showing you affection by following you.

Rather than trying to get them to stop, return their gesture of affection in a way that they will appreciate.

Try ways of interacting with your cat that are less threatening for them if they won’t accept cuddles (see below).

How To Get Your Cat More Open To Cuddling

Here are some types of non-invasive cuddling that you can try with your cat.

Watch your cat’s body language to see how they react to determine what kind of non-invasive affection they most appreciate:

Note: Laser toys are popular with many cats, but they are best used for very short periods and followed up with other toys. Cats become frustrated when they can’t catch their ‘prey’, and this can become a source of stress for some kitties.

Never, ever force your cat to cuddle if she doesn’t want to! Whatever reason your cat has for not wanting to cuddle, it’s a valid one for them. By forcing cuddles, you would be frightening your cat, making the problem worse.

If Your Cat Has Separation Anxiety

If your cat has separation anxiety, you won’t want to stop them from following you, as that will only make them more stressed. It’s crucial to remove stressors where possible.

Before trying to get your cat to cuddle you, think about why they might be stressed and mitigate that as much as you can.

They could be bored, frightened of another pet in the house, unsure because of a new addition to the family or a house move, or something else.

Other Signs Of Feline Affection

If your cat refuses to cuddle, don’t despair and think they don’t love you.

Following you is one of the ways your cat says they love you!

There are other ways cats have of displaying their love for us, like:

Your cat wants to be in your company but is then not open or receptive to cuddling.

While there can be several different underlying causes of this and different means of addressing the problem, be mindful of your cat and how they could be feeling along the way.

Don’t force anything, and be patient in your approach.

Other related cat guides you may want to see: