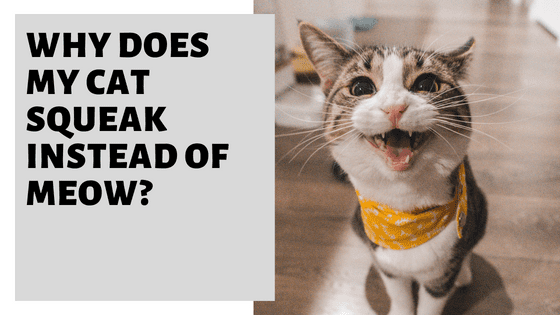 If your cat squeaks instead of meows, you’re probably wondering what is going on. Is this even normal? Do some cats usually squeak rather than meow? If they do, do they ever stop? And if they stop squeaking and start meowing, when is this likely to happen? Well, thankfully, you came to the right place. Here are the answers to all of these questions and more.

Interestingly, feral cats have never learned to meow, as cats meow only to humans, not to each other.

In other words, meowing is adaptive – something developed for us humans, and hence, it is something we have learned to recognize in cats.

So if your cat isn’t meowing, it is no surprise you are a little concerned.

Let’s ease those, shall we?

Is It Normal For A Cat To Squeak And Not Meow?

Most of the time, it’s not normal for a domestic cat to squeak and not meow unless there is a problem, such as an injury or an illness. It is normal, though, for feral cats to squeak rather than meow.

Some cats can be born with damaged vocal cords, affecting their ability to meow and make other vocalizations.

If you suspect a congenital issue could be the cause of your cat’s squeaking, you can have her checked by your vet to be sure.

An Infection or Disease

An infection or a disease could be the cause of your cat’s squeaking, particularly if they used to meow and suddenly stopped.

Possible problems that could cause vocal cord problems include:

Note: Any of the above problems could mean your cat has difficulty making other sounds, too, besides meowing. They might also find it difficult to purr, hiss or growl.

Consider the sounds your cat is making: if they are happy squeaking, they’re probably fine. However, if they’re trying to meow and it comes out raspy or as if they’re otherwise struggling, get them to the vet for a visit.

Cat laryngitis can make it difficult for your cat to meow, resulting in her squeaking to make herself heard.

Cat laryngitis can result from a cat cold, calicivirus, or rhinotracheitis. There are other conditions, though, that can cause your cat to lose her voice, such as:

How to Spot Cat Laryngitis

Symptoms of cat laryngitis are several, depending on the cause. In addition to changes in your cat’s vocalizations (such as squeaking), the signs of laryngitis include:

If your cat’s laryngitis is due to a cat cold or a virus, you may also notice typical cold symptoms like:

It could be your cat is injured or unwell to the point where they are just too tired to communicate.

Perhaps your cat has gotten into a nasty fight with another cat and has been seriously injured.

Meowing requires more effort than squeaking, so they

may resort to squeaking as a way to convey her distress.

Know, though, that cats tend to hide any weaknesses out of instinct, so cats who squeak because of a serious injury need immediate veterinary attention.

Some cats, particularly feral or neglected cats, can become so hungry and exhausted that they squeak as a sign of distress. Weak cats in this situation need immediate nourishment to survive.

Dehydration can also cause some cats to squeak. Dehydration is quite serious and can cause major organ failure within 3 to 4 days.

If you come across a cat who is squeaking and appears weak, provide food and water and keep an eye on her for a few hours if you can.

If they are still unable to produce any other sounds apart from squeaking, get her to a vet if possible.

Not Learning to Meow

Kittens learn their behaviors from their mothers, but meowing is something domestic cats will do with their humans.

Cats don’t meow to communicate with each other, so feral cats will squeak instead of meow because they have never learned how.

A kitten who has grown up without siblings can also be less likely to meow, as they might not have heard these sounds around her.

If you have welcomed a feral cat into your home and they are squeaking rather than meowing, this is normal behavior for her and is usually no cause for concern.

Will My Cat Stop Squeaking and Start Meowing?

If your cat is squeaking as a kitten, it’s likely they’ll start meowing as they get older. If, however, they have an illness or a congenital problem, they are unlikely to start meowing without veterinary intervention.

Some cats are ‘late bloomers’ when it comes to meowing, so there is no hard and fast rule for all cats as to whether they’ll stop squeaking and start meowing.

There are kittens who take a few months to find their own voices.

And even then, because cats use meowing as a way to communicate with humans, some cats are more inclined to ‘speak’ than others.

Some breeds are also more vocal than others, so you may just have a quiet cat. Cat breeds who tend to be quieter include:

Then there are cat breeds that are known for being very vocal. If you have one of these breeds, it could be your cat has a problem that’s not allowing her to meow.

Some of the more vocal cat breeds include:

You can expect these talkative cats to start meowing (as well as making other sounds) at an early age.

If you have to take your cat to the vet because you suspect a physical problem (see above), your vet may assist your cat in getting her meow back by doing any of the following:

When Will My Cat Stop Squeaking and Start Meowing?

When your cat stops squeaking and starts meowing depends on the cause for their squeaking.

If your cat’s squeaking is because they’re growing and hasn’t learned to meow yet, then they’ll likely start meowing once they reach adulthood.

Here’s the average progression of a cat’s meow:

Note: Some kittens have squeakier meows than others. Usually, kittens with squeaky voices develop their meows into deeper meows as they grow. For some kittens, it can take a year or two for them to find their full sound. Some kittens even need longer – as long as a couple of years. A kitten’s meow is higher-pitched and squeakier than an adult cat’s meow, anyway, so some squeakiness is to be expected.

If your cat is still squeaking once they are an an adult, it’s worth considering the other causes of squeaking (see above).

Other Things to Know About Your Cat Squeaking and Meowing

It could be your cat is less vocal, as they might not feel the need to meow. Many people think it’s natural for older cats to lose their meows, although this is not usually the case unless there are health problems.

You May Have a Less Vocal Cat

If your kitten or young cat isn’t meowing, they may be a less vocal cat, in which case it’s usually nothing to worry about.

If your cat has grown up at home and hasn’t been especially praised for expressing their needs, they may have decided that meowing isn’t effective.

Some cats decide they have other ways of letting you know when they want to play or eat.

If your cat finds eye contact and body language are enough, they may not feel the need to meow to get you to do what they wants.

Try Talking to Your Cat

If you are concerned that your cat doesn’t know how to meow or doesn’t want to do so, you can try speaking to them more often.

Your cat may not understand what you’re saying, but they’ll get that you’re talking to them, so they may be encouraged to talk back!

You can start talking to your cat from kittenhood – they’ll appreciate your attempts to communicate with them from a young age.

Communication helps the bonding process: your kitten will feel loved and will understand that vocal communication is important.

They’ll naturally develop her meow sound to help speak to you.

Some people think that older cats can lose their meow as part of the natural process of aging.

However, a healthy older cat won’t lose their meow as they age – if your older cat starts to squeak rather than meow, there is most likely a health problem.

Older cats can be more vulnerable to hyperthyroidism, which can cause laryngitis in their thyroid glands.

Deaf Cats Are Not More Likely To Squeak

Many people think deaf cats are more likely to squeak or not make any sound, but the opposite is true.

Because deaf cats can’t hear themselves to regulate the pitch or noise levels of their meows, they are often louder and shriller than other cats.

Deaf cats will depend on you to step into their field of vision and signal to them or clap so that they feel the vibration as a means of communication.

When To Worry About Your Cat Squeaking And Not Meowing

Here are some indications something might be wrong, and you’ll need to get your cat to the vet. Keep an eye out if:

A cat not meowing but instead squeaking is a little concerning.

That being said, it may not be an issue, especially if they are a new kitten or you are yet to hear them meow.

However, if your cat is older, used to meowing, or you are just generally concerned by other developments and behavioral changes – do contact a vet.

It could be that something is going on that needs investigating.

Other related guides you may want to read: