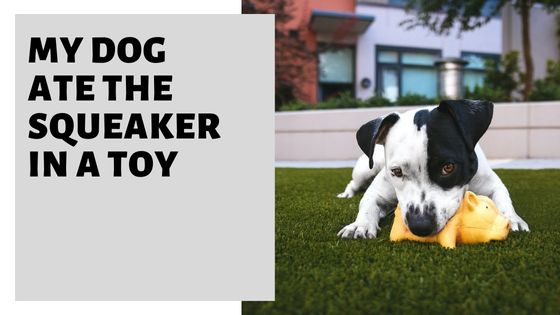 How bizarre but entirely alarming. That squeaker, which, let’s be honest, was starting to get a little bit annoying, has now found its way into your dog’s stomach. It’s concerning. It also naturally leads to questions about what will happen – if dogs can pass it, whether or not you need to do anything specific. Well, here is exactly how you will need to approach it.

You know what you need to do.

Don’t take any chances here. Nor waste any time.

From there you can always continue reading below about what could potentially happen, perhaps even bookmark this page to refer back to it later (or at least read it once the call has been makde)

But get your dog seen. That’s the priority.

What Will Happen To A Dog That Eats A Squeaker From A Toy?

Various things can happen to a dog that eats a squeaker from a toy. Sometimes he can pass the squeaker without coming to any harm, but other times he might choke. His digestive tract could also get blocked. The types of rubber found in some squeakers can cause other health problems.

If the squeaker is too big for your dog to swallow, he might struggle to breathe and start choking.

If you see your dog in this situation, try performing a Heimlich maneuver on him.

Sometimes a dog can still breathe through the blockage but might be coughing or gagging in an attempt to dislodge the squeaker.

Squeakers are small enough that they can easily get caught in a dog’s throat.

Squeakers can sometimes lodge themselves in your dog’s digestive tract, whether it’s the stomach, intestines, or bowel.

A blocked intestinal tract has serious consequences, such as:

Because dogs have the instinct to hide weaknesses such as feeling ill, you might not even know something is wrong until it’s too late to intervene.

Here are some symptoms that your dog is in trouble:

Can A Dog Pass A Plastic Squeaker?

If the squeaker is small and your dog isn’t too big, your dog might be able to pass it on his own. However, if you are in any doubt, this is one of those situations that requires quick veterinary action.

Even if the squeaker is small compared to the size of your dog, it could still get stuck, and you wouldn’t be able to tell until it’s too late to save your dog.

Quick action is required in order to avoid bigger problems.

How Long Does It Take For A Dog To Pass a Squeaker?

It can take a dog anywhere from 10 to 72 hours to pass a squeaker – but if his digestive system is blocked, there is the possibility he could die within 72 hours.

Just because your dog can potentially pass a squeaker doesn’t mean you should wait.

Your dog might be in extreme pain or discomfort, and the risks simply aren’t worth it.

It takes only 2 hours for a squeaker to reach the intestines (if it doesn’t get stuck), at which point expensive surgery is required if your dog can’t pass it on his own.

Large dogs can pass small squeakers in their feces within 2 days, but you have no way of knowing whether the squeaker will get stuck or not.

The smaller the dog, the less likely he’ll be able to pass the squeaker on his own.

In addition, squeakers aren’t meant for consumption, so some contain toxic chemicals for dogs.

This is even more true for toys that have not been made for animals, such as children’s toys.

One chemical to be wary of is BPA (Bisphenol A), which can cause unnatural changes to the bacteria that live in your dog’s gut.

BPA can also cause changes to your dog’s metabolism.

Dogs love squeakers, so they are tempted by these toys and have no awareness of the risks involved with having a good munch on them!

Another danger of waiting for your dog to pass the squeaker is sharp edges: you don’t know if your dog has chewed off bits before eating it.

Any sharp edges could pierce his intestines or bowel and be fatal.

What To Do Now That Your Dog Has Eaten A Squeaker

You need to act quickly if your dog has eaten a squeaker. Depending on the size of your dog, the consequences could range from none to fatal.

What To Do Yourself

Here are the steps to take now that your dog has eaten a squeaker:

If fewer than 2 hours have passed since your dog has eaten the squeaker, your vet might be able to induce vomiting.

And if the squeaker is stuck further up in your dog’s esophagus, your vet might be able to take it out safely so that it doesn’t go further down.

Depending on your dog’s symptoms and how much time has passed, here are some procedures your vet might carry out:

Your vet may also give your dog some antibiotics or something else to help reduce any inflammation.

In some cases, your vet will say your dog can pass the squeaker himself.

If your dog needs surgery, this will most likely be lengthy and expensive.

Your vet will have to remove parts of the intestine or bowel if the squeaker has gotten stuck, and then he’ll have to sew the rest back together.

The prognosis is usually good if your vet can repair internal damage before peritonitis sets in.

After surgery, your dog will need a lot of TLC, a special diet containing bland foods that are easy to digest, and perhaps extra pain medication.

Be sure to observe your dog for 72 hours after surgery to avoid complications like:

Your vet may also prescribe medication to help with any nausea your dog may be experiencing.

It’s worth knowing that acting quickly to avoid surgery – even if you’re in doubt as to whether your dog has swallowed a squeaker or not – is in your dog’s best interests.

Anesthesia has its own set of risks which are best avoided where possible, which is why surgery is a last resort.

How To Prevent Your Dog From Eating Squeakers In The Future

Here are some simple things to do to avoid your dog eating squeakers in the future:

Note: Despite what some websites recommend, do not be tempted to use a muzzle when you aren’t around. If your dog chews a lot when you aren’t home, he’s likely stressed, bored, or anxious – in which case, address those situations first. A happy dog is less apt to destroy things when left alone.

Why Do Dogs Eat the Squeaker?

Dogs are attracted to squeakers and want to eat them because their noise simulates the sound their prey makes when they catch an animal in the wild.

Let’s briefly look at why a dog would even do this.

That way you can hopefully prevent an episode like this, in the future.

In the wild, dogs hunt and kill small animals, who squeak with fright or pain.

Our domesticated dogs have the same hunting instincts, and the sound of a squeaker is similar to the sound their prey makes as they chomp down on it and carry it off to eat it.

Your dog’s instinct is to hunt down, catch, carry and tear up his prey – so he’ll be tempted to do the same with his squeaky toy.

With a squeaker, dogs get an instant auditory reward as they chomp on it to get it to squeak.

For a dog, this sound is rewarding and feels good to hear, so he wants to do it again and again.

Some dogs have a strong preference for one or the other.

So now you know what to do, and why your dog has eaten it to begin with.

Act swiftly, and your chances of a full recovery and a swift elimination drastically increase.

I don’t mean to scare you, but it couldn’t be said any other way.

Over to your vet.

Other related guides you may need to check out: