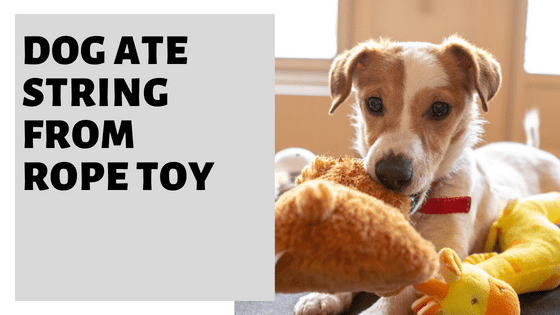 Lots of dog toys have string. And usually, it’s not something we ever need to think or worry about. Then your dog eats it. And that all changes. If you are here, your dog has done just that, right?  Now you’re a little concerned and perhaps even panicking; what will happen? Can he pass it? What should you do in the meantime? Well, here is everything you are going to need to know (and do).

You cannot take any chances here.

The truth is, it’s unlikely you will know much string they have eaten.

And it’s what that string can do that means you need to be prompt in your response.

So let’s keep looking at what can happen before turning to your response.

What Will Happen To A Dog That Eats String From A Rope Toy?

Unfortunately, swallowing string from a rope toy is much more dangerous for your dog than if he ingests bits of cotton stuffing, rubber, fabric, or plastic.

Vets call strands of rope ‘linear foreign bodies’, which are the most dangerous objects your dog can swallow (see below).

Some dogs will shred their toys to bits, while others might eat only tiny strands of string or pieces of another foreign substance.

While eating tiny strands isn’t quite as dangerous as swallowing long strings, small strands can still cause a blockage in your dog’s intestines.

Think of it like hairs clogging a shower drain: sometimes it doesn’t take much if you’ve got enough small hairs.

Can A Dog Die From Swallowing String From A Rope Toy?

Sadly, a dog can die from swallowing string from a rope toy: some dogs have, and others will, as long as owners are unaware of the dangers.

If your dog eats a long piece of rope, one end of it might stay trapped in his stomach while the other can travel as far as his upper intestines.

Your dog’s digestive tract will contract to try and move the string through his body, causing the strand to tighten.

It will be as if you are pulling on the drawstring of a pair of sweatpants: the string gets pulled tighter and tighter until your dog’s intestines are caught in a cinch.

The result is – understandably – a severe amount of pain for your dog.

The string might pull his intestines into a rigid ball. In addition, as the string digs into his intestinal wall, it can cause lacerations.

As the string causes lacerations, the contents of your dog’s intestines will leak through into his abdomen.

Because the intestinal contents are contaminated with acid and bacteria, the blood can become infected (sepsis).

Once the membranes of the abdominal walls are infected, the recovery rate is not good.

Severe sepsis causes septic shock, which is often fatal. Mortality rates in dogs due to sepsis range from 20 to 68 percent.

Another risk from ingesting string that leads to intestinal obstruction can be extreme dehydration because of severe imbalances in your dog’s electrolytes (essential minerals).

The result can be kidney failure or shock, both of which are fatal.

Of course, these are worst case scenarios, but it is essential to be aware of the outcomes to ensure you take the appropriate action, in good time.

Can A Dog Pass A Piece Of String?

A dog is physically able to pass a piece of string, but that doesn’t mean he will succeed at it. Any time your dog swallows an inedible object, he’s taking a risk as to whether it will come out the other side or not.

How Long Does It Take For A Dog to Pass String?

A piece of string can take 10, 24, or as long as 48 hours to pass through your dog’s digestive tract. However, if you wait this long to see if your dog passes the string, it can be too late to save him from the devastating consequences of intestinal perforation or blockage.

Just because a dog can pass string doesn’t mean he should.

Some dogs will eat all kinds of objects, including string, and yet some pet websites suggest feeding your dog high-fiber foods and waiting!

However, given the risk of extreme pain, damage to the bowel, and mortality rates from sepsis (see above), these options are not to be considered by anyone who cares about the well-being of their dog.

Dogs are notoriously good at hiding their pain, too, so you might not notice any trouble until it’s too late.

Once the string gets to the small intestine, it is virtually impossible for a dog to expel it naturally.

Some types of string can even expand in the digestive tract when they come into contact with the contents of the stomach.

Here are some symptoms to watch for that could indicate your dog has swallowed string and is not able to pass it himself:

If you suspect your dog has eaten string from a rope toy, get him to the vet as a matter of urgency.

Some people suggest waiting to see if your dog will pass the string on his own, but it’s too dangerous not to get your dog immediate attention.

If you can see the string hanging from your dog’s mouth, do not cut it, pull on it, or otherwise attempt to remove it.

Doing so can cause damage to your dog’s esophagus or throat.

If your dog is choking and you can’t see any blockage, you may have to attempt a Heimlich maneuver.

Your vet may be able to induce vomiting, depending on how much time has passed.

Sometimes the vet can remove the string from your dog’s stomach before it has had a chance to travel further.

Your vet will do any of the following to determine if your dog has swallowed a piece of string (or something else):

If your vet can see the string in the large intestine, then your dog is very fortunate.

Once items reach the large intestine, they usually can be excreted through the stools.

Sadly, many dogs who have swallowed string have one end in the stomach and the other in the small intestine.

These dogs require hours of delicate surgery to remove the blockage.

Often this surgery necessitates the removal of large portions of your dog’s bowel.

The vet has to make several incisions because the muscles of the wall of your dog’s intestines are often gripping various parts of the rope.

In addition, if your dog survives the surgery, his recovery period can be lengthy as his digestive system heals.

Feeding your dog becomes an entirely new challenge to aid his healing process.

How To Prevent Future Problems

The best way to prevent future problems with string from rope toys is to not allow your dog to play with these types of toys.

Some owners think rope toys are safe enough under supervision.

While it’s better to watch your dog than leave him unattended with a dangerous toy, the best thing is to avoid it altogether.

Even if you are there to watch your dog as he plays, you often have no way of knowing how much string he could be removing and eating.

As mentioned above, even tiny strands can cause blockages.

At the end of the day, the risk to your dog’s health isn’t worth it.

So, here are some alternatives to rope toys that are much safer for your dog:

Here are some materials to avoid if your dog is an enthusiastic chewer:

Unfortunately, dogs can eat strings from rope toys, as well as pieces of other types of toys.

Any toy that your dog is chewing on is likely to end up bitten into pieces, some of which your dog will eat.

And this is true of all breeds too, whether they are big chewers, or not. Puppies included.

So, if you have given a toy with string to your dog, there is always the chance that it could be swallowed.

As you have discovered.

So now, it’s time to inspect your dogs mouth and contact a vet if you haven’t already.

From there, they will advise on the next steps.

And just remember to throw that rope toy away. And don’t replace it with a like for like, either.