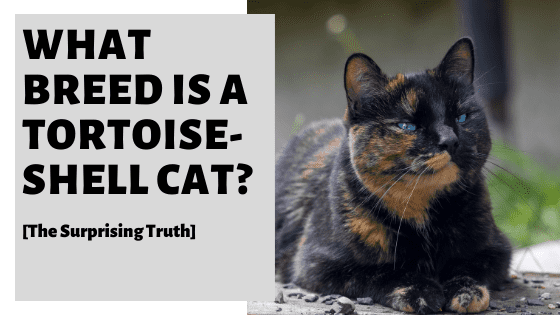 If you are considering a tortoiseshell cat, you may be wondering what breed they are. This is, of course, useful information in order to know what to expect with regards to temperament, the potential size of your kitty, and their care needs. So, let’s take a look.

So, what breed is a tortoiseshell cat? The term ‘tortoiseshell’ refers to the coat markings and patterns on a cat’s fur rather than the breed itself. There is no single breed that gives you those beautiful tortoiseshell markings. However, tortoiseshells are most commonly found among the American Shorthair, Cornish Rex, Persian, Japanese Bobtail, Ragdoll, British Shorthair, Ragamuffin, and Maine Coon breeds.

I’m sure you still have plenty of questions; I certainly did.

So let us now take a look at them so that we can get a much better understanding of what ‘tortoiseshell’ really means and what to expect should you decide to get one!

What Makes A Cat A Tortoiseshell?

What makes a cat a tortoiseshell is the beautiful pattern of colors on its coat that resemble those on a tortoise’s shell. The distinguishing features of a tortoiseshell include the mixture of two colors other than white. These colors can be in large or small patches or can even be closely combined.

Common tortoiseshell colors are red and black, but sometimes you can find patches of orange, yellow, or cream (instead of red).

You can also find blue, tabby, chocolate, or gray colors (instead of black).

That’s a lot of color combinations to choose from!

Some tortoiseshell cats have tabby stripes (these cats are called ‘torbies’).

Tortoiseshells can sometimes have one color on one side of their body and a different color on the other.

You often see them with a half black and half ginger face, for example.

These half-and-half color combinations can occur all over their bodies in various colors.

Your tortoiseshell cat can have any eye color, as their fur markings don’t determine the color of their eyes.

Tortoiseshells can have eye colors from green, hazel, amber, or a mixture (or even blue eyes, which is rare but can happen).

The Personality Of A Tortoiseshell

In terms of personality, some distinct characteristics sometimes apply to tortoiseshell.

Some tortoiseshell and calico cats can display aggressive behavior when interacting with their humans – scratching, biting, or hissing.

They’re a bit more diva, though they love their owners and are fiercely loyal.

What Causes Tortoiseshell In Cats?

There are male tortoiseshells, in which case the male most likely has an extra DNA strand with an additional X chromosome (as well as the Y chromosome).

Because of their extra X chromosome, male tortoiseshell cats are often sterile.

While an unborn kitten is still developing, one X chromosome in every cell deactivates.

The X chromosome that deactivates in each cell does so randomly (this is called lyonization).

That’s how the tortoiseshell pattern is created!

Tortoiseshell cats have been around since ancient times.

There’s an old English wives’ tale that believes that you can treat a wart by rubbing it with the tail of a tortoiseshell cat.

In Scotland and Ireland, tortoiseshells are believed to be good luck.

In the US, torties have gained the nickname of ‘money cats’.

Some Japanese believe that tortoiseshells can keep ghosts from your door, and some tortoiseshells are kept on boats to keep their owners safe while on the water.

What Breeds Can Tortoiseshell Cats Be?

Tortoiseshell cats can be purebreds as well as mixed breeds.

So tortoiseshell cats – or torties, as they are sometimes called – can come with all different kinds of coats.

Shorthair and long-haired cats can have these stunning markings.

Mixed breeds can also be tortoiseshells, so there are, in fact, endless variations of the kinds of cats that can give birth to tortoiseshell kittens.

Tortoiseshells and calicos have similar colors on their coats, so they are often confused.

An easy way to tell these cats apart is to look at the base color of their fur.

Calicos usually have a white fur base that has tortoiseshell-colored patches.

Tortoiseshells are mostly ginger or black with touches of patches of the colors mentioned above (in addition to white).

How To Tell What Breed a Tortoiseshell Cat Is

You can tell what breed a tortoiseshell cat is in the same way that you’d determine the breed of any cat.

There are various physical characteristics to consider when trying to determine your breed:

First, look at the length of your cat’s fur. Is it short, medium, or long?

Next, look at your cat’s type of ears, the shape of its face, the size of its body, and its tail:

Another thing to look at is the weight of your cat.

You can compare against the breed average, and expectations.

Adult American Shorthairs average out at much less: males weigh 11 to 15 pounds, and females 6 to 12 pounds.

Is your cat very relaxed and laid-back?

Ragdolls are known for being so calm that they’ll go limp in your arms when you pick them up, and they love cuddles.

Does your cat love the water? You could have a Turkish Van: these cats love a good swim!

It can be tough to tell what breed your cat is, especially if it isn’t purebred.

You can always, of course, enlist the help of your vet to help you solve this puzzle!

Other Things To Know About Tortoiseshell Cats

Although tortoiseshells aren’t necessarily purebreds, they can be more expensive to acquire due to their beautiful markings.

You could find one at your local animal shelter, but if you look to buy one, you can expect to pay anything from $1000 to $2000!

The more unusual the cat’s markings, the more expensive they’re likely to be.

Although rumors are going around the internet that tortoiseshells are all divas, this isn’t true.

Just as with other cat breeds, tortoiseshells have their own unique personalities.

Some tortoiseshells can be quite vocal.

Our tortoiseshell was an incredible hunter, but she would also bring us baby rabbits (unhurt!) for us to look after!

However, in real life, he had a gorgeous tortoiseshell cat called Cattarina, who used to sit on his shoulder as he wrote.

She was his muse and was so attached to him that she died within weeks when he died.

A Tortoiseshell Can Be a Greeter

A friendly tortoiseshell in Japan, called Tama, was a working feline: she was the station master at Kishi Station in Wakayama, and her job was to greet passengers as they arrived.

She was paid, of course, in cat food!

She even had her own badge (around her neck) and a hat so that everyone knew her status.

Tortoiseshell Health Depends on the Breed

You don’t need to worry about tortoiseshell cats having more health problems than other cats.

Because tortoiseshell cats aren’t found in a specific breed, any health issues are those of the breed rather than the cat’s coloring.

For example, if you have a Persian tortoiseshell, you’ll need to know about health issues affecting Persians.

As with any cat, though, take yours to the vet for regular checkups.

Tortoiseshells aren’t necessarily hardier than other cats, either, and they need affectionate love and care just as other cats do.

In terms of their lifespan, they can live longer or shorter lives depending on their breed and their overall health.

Look at the lifespan of your cat’s breed – and if you have a mixed or crossbred cat, know that these cats tend to live longer overall.

The average lifespan of a cat is about 14 years, according to this study.

So if you’re after a beautiful and loyal companion for life, no reason not to get a tortoiseshell!

There is no one breed of tortoiseshell; there are many.

With that said there are certainly breeds that are more likely to have this beautiful two-color coat pattern, or that you see available for adoption, at least.

Just take into account, that if you are considering taking one on, you’ll likely be getting a female!

Oh, and they cost quite a bit too. Be sure you can afford one!