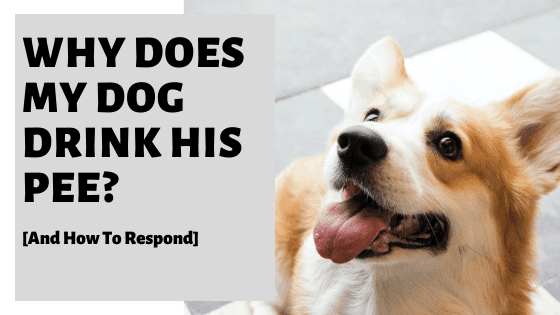 If you’ve seen your dog drink its own urine, you will probably be concerned. But is it normal for dogs to drink their pee? And how can you stop it? Here’s everything you’ll want to know so that you can understand as well as prevent this behavior which, for most of us, is slightly disturbing if not downright offputting.

So, why does my dog drink its pee? The most common reason for a dog to drink their urine is through simple dehydration. Although, it may indicate a lack of nutrients in the diet or another wider medical issue that needs addressing. It can also be a behavioral thing too; to hide a bad deed, not knowing any better, or being enticed to do so through the smell.

As you can see, there is no outright and definitive reason.

It is going to differ and depend on context.

So, you are going to need to be a little vigilant here.

Keep an eye on your dog and other accompanying behaviors.

You may just be able to work it out by doing so.

Ultimately, because dogs can’t communicate using words, they mostly use body language to let us know what’s going on.

And we can tap into that.

Nevertheless, let’s continue to explore this bizarre behavior before moving on to how to address it!

Is It Normal for Dogs To Drink Their Pee?

It is considered normal for dogs to drink their pee from time to time. However, it is not normal for a dog to do this routinely if it’s not typical of your dog or if there is no reason for it.

In reality, urine drinking in dogs is considered normal if any of the following situations apply:

Dehydration Or A Lack Of Nutrients

If your dog isn’t getting enough nutrients – including water – then he may resort to drinking his urine in a desperate attempt to ingest more liquids.

Dogs should be drinking at least an ounce of water per pound of their body weight every day. Make sure your dog is getting enough clean water, and change the water daily.

Some experts believe that dogs drink their own urine if they are missing crucial nutrients in their diet.

Most pet foods contain the correct amount of overall nutrients, including vitamins and minerals, but you may want to check that your dog is getting a balanced diet.

Keeping Clean Or Getting Rid Of Evidence

Dogs like to keep clean, and if they know that peeing in the house is not allowed, they may drink their own urine to get rid of the evidence of their accident.

Think of their behavior like a child who hides the pieces of a broken lamp or another object: they don’t want to get in trouble!

Likewise, dogs have a natural desire for cleanliness in their dens.

For instance, mother dogs will eat their puppies’ feces and urine. Your dog may just be aiming to make his home as clean as possible.

Behavior Problems Or Past Trauma

Sometimes a dog will drink its own urine because of behavior issues: this is often the case when you also spot other negative habits.

Some dogs will drink their urine because of past trauma: situations in which they weren’t given sufficient food or drink.

They might be copying past behavior when they had no other choice but to eat their feces for nutrients. Unfortunately, dogs can even acquire a taste for their excretions over time.

Some dogs drink their urine if they’re bored, so make sure your dog is getting enough exercise as well as love and attention from you.

It could be that your dog hasn’t been potty trained correctly and has developed a bad habit of drinking his urine.

Maybe your dog wasn’t able to hold it in for long enough as a puppy or was rebelling against younger puppies.

If your dog has potty breaks that are too short or doesn’t have enough of them, he can have accidents. He may then want to ‘clean up’ afterward.

Some dogs like the smell of urine, whether it’s theirs or someone else’s.

If you see your dog drinking not only his own urine but the urine of his doggie friends, he may just like the scent.

It could be that your dog has a medical problem, in which case you’ll need a trip to the vet.

Some severe medical conditions can cause your dog to drink his urine, such as Cushing’s, Diabetes Mellitus, and kidney failure.

These conditions can cause excess thirst, leading to your dog drinking urine.

If you think your dog could have a medical problem, consult your vet right away, as these conditions are life-threatening and can quickly get worse.

Can My Dog Get Sick From Drinking Pee?

Fortunately, your dog won’t get sick from drinking his pee. Dogs have evolved to have superior filtration systems to human beings, so you don’t need to be worried about any harmful bacteria in their urine.

Dogs can actually sterilize their own urine once they’ve consumed it.

However, this probably doesn’t mean you are happy for them to drink it.

Most of us want to eliminate this habit – mostly because it’s a bit off-putting, to say the least!

Generally, though, if your dog is drinking or licking the pee of another animal, you need to be aware of potential problems.

There are two main types of bacteria that can be found in the excretions of other animals and can cause harm to your dog.

Leptospirosis is bacteria that can be found in the urine of wild as well as some domesticated animals.

An animal can be in good health and still be a carrier for these bacteria, as they are excreted in the urine.

Leptospirosis organisms can be found in puddles and other water sources where your dog may want to have a drink.

Not all dogs will get sick when exposed to these bacteria, but the results can be deadly: the most common outcome is kidney failure.

If you are prone to taking walks in nature with your dog, avoid letting him drink in puddles, particularly if there’s a possibility of urine from other animals.

The best way to prevent contracting leptospirosis is with a vaccine. Speak to your vet to see if you need this for your dog: it depends on where you live and what elements your dog is exposed to.

Giardia organisms are also found in puddles and come from the intestinal tracts of various wild and domesticated animals. The bacteria leave their host through the feces: dogs who attend dog parks are more likely to contract giardia.

While not as life-threatening as leptospirosis, Giardiasis in dogs causes discomfort and can be treated with medication. Your vet will probably recommend some fenbendazole or metronidazole.

How To Stop Your Dog From Drinking His Pee

If you want your dog to cease this rather unseemly habit of drinking pee, there are various things that you can try.

Take Your Dog To The Vet

The vet could be your first stop, particularly if your dog has newly begun this behavior. You will want to eliminate any medical issues first, especially as they can be quite serious.

Some dogs get urinary tract infections which can cause more frequent drinking and urinating. Your vet may wish to do a urinalysis.

UTIs are commonly treated with a course of antibiotics, and in some cases, fluid therapy if your dog is severely dehydrated.

Once any medical issue has cleared up, your dog should stop drinking his urine on his own.

Other possible medical conditions are Cushing’s Disease (difficult to diagnose but easy to treat) and pica (which could be behavioral).

Apparently, many dogs need a refresher on house training at some point in their lives. The most effective way to do this is by reinforcing your dog’s good habits.

Give your dog treats (whether food treats, praise, or physical affection) when he goes outside. Your dog already knows you want him to go outside, so often, a refresher will do the trick.

Be sure to mop up the urine quickly, especially if your dog likes the smell. Don’t use white vinegar or bleach, as the ammonia smell (similar to urine) may cause your dog to want to come back and mark the spot again.

Use enzyme-based cleaners, or make your own with a mixture of hydrogen peroxide, baking soda, and liquid soap.

This might seem obvious, but always having a bowl of fresh water available to your dog can really help prevent urine drinking.

Avoid putting their water bowl right next to their food bowl since the water will quickly get dirty. Dogs, like other animals, will seek out clean water. They won’t want to drink water that’s too dirty (most of the time!)

If your dog often goes outside to your yard or another outside area, keep a bowl of fresh water outdoors as well.

Wherever the water bowl is, change the water daily and make sure it’s always clean.

If you are trying to correct a behavior that has been going on for a while, it won’t go away overnight. Be patient with your dog.

Don’t rub your dog’s nose in his ‘accidents’: this may only reinforce his taste for urine, and he won’t understand what you’re doing.

Equally, be calm with your dog. Some dogs urinate out of fear if their people yell at them, especially as they are usually confused as to what is expected of them.

Call An Expert If Needed

It may take time, and you might need to call in an expert for help.

Correcting your dog’s behavior can be tricky, so better to get support if it becomes too much for you or your dog.

Dogs do drink their own pee from time to time.

And while this may seem entirely abnormal, rest assured that it’s relatively common and, in most contexts, not a major cause of concern.

That being said, it can indicate a wider, more serious problem, particularly if this is something that your dog has just started doing or continues to do for a while.

So, do contact a vet and discuss this with them.

Do monitor your dog and look out for any other changes in their behavior.

And make sure that you are meeting the needs of your dog.

If it is dehydration, for instance, then you need to be a little more proactive about keeping their bowl topped up with fresh water.

Or it could mean a dietary overhaul.

Ultimately, something needs addressing – the key is finding out just what!