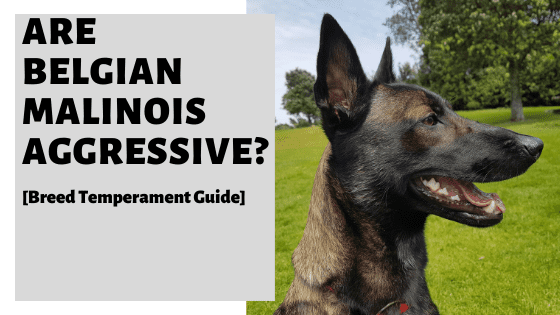 If you are considering getting a Belgian Malinois for your family, you will certainly want to know whether they’re aggressive or not. Are these dogs good around other people, including children? Do they get along with other pets? Let’s find out!

So, are Belgian Malinois aggressive? Belgian Malinois are not typically an aggressive breed, although they do have a very strong protective instinct since they were bred for chasing and herding: some may nip at the heels of people. Equally, if they think they need to defend you or yours, they can be aggressive towards strangers, particularly if they haven’t been socialized with other people as puppies.

They are working dogs, after all.

That being said with the right training and care, this breed can make for a terrific, well-behaved family pet.

Let us now explore their temperament further to see exactly why this is the case.

And we’ll also be looking at potential causes, and solutions, for aggressive behavior.

So stick around, especially if you are close to choosing the Belgian Malinois (otherwise known as a Mal).

This information could prove invaluable in your decision, or approach should you decide to proceed.

What Is The Typical Belgian Malinois Temperament?

The typical Belgian Malinois temperament is confident, highly intelligent, hardworking, and active. Belgian Malinois were bred to herd and chase other animals, and they enjoy participating with their families in any and all activities.

Belgian Malinois are happiest when they can put their high energy to work doing various tasks.

They used to be used for protecting livestock, but today they are often trained to protect their families.

These dogs can seem aloof with strangers, but they will be very loving with their families once they have formed bonds.

They will then be naturally protective of their loved ones. Although they can appear formidable, they are sweet and sensitive dogs.

Belgian Malinois are known for nipping, biting, and chasing as part of their herding instincts: this is why it’s crucial to train them as puppies to bite toys rather than fingers!

Is A Belgian Malinois A Good Family Dog?

There is quite a lot of debate on the internet about whether a Belgian Malinois can make a good family dog. Some people feel that because they have such a strong prey drive, they are not suitable for homes with children.

However, with the right training, a Belgian Malinois can be a good family dog, particularly if they have been raised with the children.

They do have the instinct to hunt prey, so they will chase young children unless they have been taught not to!

If you have quite a large yard or a sizeable house with easy access to the outdoors, your dog can be happy.

Belgian Malinois need lots of room to run and play: they can be good family dogs, but they don’t do well in apartments or other small spaces.

As long as your dog has lots of space and has been trained to accept your children and other family members from puppyhood, he should be an excellent family dog.

Belgian Malinois are known for their love and loyalty to their families. They have highly sensitive ears, so they are able to pick up unfamiliar sounds from far away and make excellent watchdogs for this reason.

One thing to know, however, is that this breed tends to be very vocal.

Belgian Malinois are known for howling, which may not be to everyone’s taste!

They also make other sounds such as “happy noises” to greet you, or barking noises to say “Danger!”, “Move!” (to other animals), or “Play with me!”

These dogs also need a strong leader in the family who can train them properly.

If you have the time and patience to train your dog well and have an active family who wants to include your dog in everything, your Mal can be an excellent family dog.

What Can Make Belgian Malinois Aggressive?

There are several things that may make a Belgian Malinois aggressive, most of which are the owner’s responsibility and can be avoided through consistent and proper training.

Although Belgian Malinois are not known to be an aggressive breed, certain individual dogs could inherit aggressiveness as a genetic trait from one or both parents.

You may not notice this problem at first, although you can overcome it with lots of patience and training.

Some individual Mals can have inherited aggressive natures towards other dogs.

If this is true for your dog, the easiest thing to do is to avoid other dogs. You don’t want your Mal to become stressed.

Being Left Alone For Too Long

Mals need lots of human attention and interaction, along with daily mental and physical workouts.

These dogs don’t do well if left alone for too long: a bored Mal can develop aggressive behaviors such as destroying furnishings, digging up the yard, or terrorizing other animals or children.

These dogs need lots of companionship as well as space to run and play.

They need to be occupied for most of the day: otherwise, they’ll come up with their own activities, which you might not approve of!

If you have to leave your dog for any length of time, get a dog sitter or someone else to help look after your pet while you’re out of the house.

Mals are highly intelligent and active dogs who need daily mental and physical activity. If they become bored, their behavior can get difficult.

These dogs can become dangerous if not properly trained because of their innate nature that pushes them to hunt and chase anything that moves.

If you haven’t taught your dog that children, visitors, and other animals are friends, he could be tempted to chase them and attack.

Some Belgian Malinois can also nip or bite out of fear if they haven’t been socialized as puppies.

Make sure your Belgian Malinois has a firm and consistent training program with a training routine to stimulate him mentally.

These dogs are also highly sensitive to human emotions.

If they’ve experienced any rough or harsh treatment, they will rebel. Dominance-based training does not work with this breed – they need firmness, consistency, and rewards for positive reinforcement.

The nature of a Belgian Malinois is such that they enjoy rough games, which can appear to be aggression for other dogs and their owners.

Even if your dog’s intention is to play rather than hurt, he can come across as frightening to others who aren’t used to his athleticism and rambunctiousness.

These dogs need constant human attention and approval as well as exercise, which is why they are often used in the military and by the police.

Your Belgian Malinois will happily run, jog, or hike with you, or join in with other activities in the great outdoors.

If you are anxious, stressed, or angry, your Belgian Malinois will pick up on this and will even reflect your own stress back at you.

Sometimes, a dog acts aggressively because his owner’s anger has rubbed off on him.

One example is family fighting: your Mal needs peaceful interactions because otherwise, he can pick up on the aggression and become angry or scared.

A frightened Belgian Malinois can be very scary and dangerous.

How To Prevent Aggression In Belgian Malinois

Fortunately, there are several ways to prevent aggression in a Belgian Malinois.

Use A Reputable Breeder

Make sure you get your dog from a good breeder who is known for providing dogs with good temperaments.

This breed perhaps isn’t the best dog to adopt as a rescue unless you can get to know the dog and possibly its history, too.

Pet store animals usually have not been well-cared for and can tend to (sadly) have behavioral problems.

Train Them While They’re Young

The earlier you train your Belgian Malinois, the better:

Be sure to leverage positive reinforcement training techniques at all times. Using high-quality treats will make this process much easier

Neuter Or Spay Your Dog

If you neuter or spay your Belgian Malinois, you won’t have hormonal issues to deal with.

Dogs who have been ‘fixed’ are less likely to display hormonal aggression.

Spend Quality Time With Your Dog

Your Mal will bond with you and will want to spend time with you.

Daily interaction is essential for the happiness and wellbeing of your dog. Your Belgian Malinois will reward you with lots of love and loyalty.

As a puppy, your Mal will need at least 30 minutes of active and intense play with you every day.

As he gets older, he’ll need longer and longer play sessions. Play lots of games with balls and other toys to keep your dog stimulated and happy.

Your dog wants to be with you more than anything else, so make sure he gets to feel he is a valued member of the family.

But they can be. That’s what you need to remember and consider here.

A lot has to do with circumstance and context.

A lot has to do with how they are cared for, raised, socialized, and train.

But with the right, consistent approach and an understanding and acknowledgment of the breed’s traits and characteristics, you can raise a very sociable, playful, and loving dog.

Belgian Malinois have a reputation for being more likely to display aggressive behaviors than German Shepherds – they are more protective, by nature. However, they are smaller in size and have less strength than the average German Shepherd. Equally, aggression should not be an issue in either breed so long as they are appropriately raised and trained.