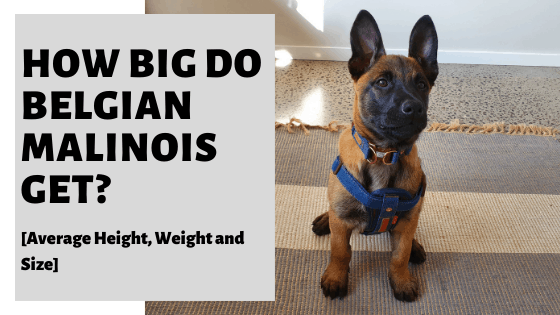 Belgian Malinois, otherwise known as Belgian Shepherds, is undoubtedly an athletic-looking breed. Sporting a frame that is both muscular and lean. But how big do these dogs typically get, and how long does it take for them to reach their final size? Here is what you need to know.

So, how big do Belgian Malinois get? Belgian Malinois typically reach 22-25″ (56-66 cm) in height, weighing between 53-77 lbs (24-35 kg) at full adult size. Males are generally somewhat taller and heavier than their female counterparts. Either way, they are classified as a medium-sized breed.

At first glance, it is easy to get the Belgian Malinois confused with a German Shepherd.

At least I did.

Although on closer inspection, you are looking at a distinctly different breed.

Their frame is the clue here.

They are a lot more compact and even have a slightly different-shaped head.

Nevertheless, this herding dog, originally from Belgium (as the name suggests), is often still working.

They are commonly found as police, military, and protection dogs.

Nevertheless, they are also kept as family companions; due to their intelligent, obedient, and friendly nature.

If you are here, you are likely considering one.

So, do keep reading to find out absolutely everything you need regarding their size.

Belgian Malinois are often classified as medium-sized dogs. Although, there is some difference in size among the sexes of the breed:

A closer look at these measurements generally makes them comparative in height and weight to Boxers, Beagles, Border Collies, and Dalmatians.

In terms of their physique, they are strong and lean. They have a high muscle-to-fat ratio, making them nimble, agile, and enthusiastic.

They possess a short rectangular body frame, a deep chest, small pricked triangular ears, and a tail that is medium in length.

It naturally follows that this dog has high energy.

They need to put their body to work to remain happy and healthy. And this should go beyond just the casual walk here and there.

We will touch on exercise a bit later.

Regarding their appearance, Malinois has a short, straight hair double coat that is relatively rough to touch but easy to groom.

The harder topcoat and dense undercoat make them well suited to the outdoors, which is likely the result of their working heritage.

At What Age Is A Belgian Malinois Full Grown?

The average Belgian Malinois will reach their full adult size between 16-19 months old. The smaller dogs of the breed will reach their final size first, as it typically takes a few additional months for the breed’s larger dogs to fill out.

Of course, it depends on the dog.

Below we will take a look at the respective growth rates of both male and female Belgian Malinois as they age:

Growth Of A Male Belgian Malinois

Growth Of A Female Belgian Malinois

As you can see, there can be quite a range in dogs; even between that of the same gender.

For instance, one male Belgian Malinois, may end up being 15 pounds lighter and reach their final size 3 months sooner compared to the largest in the breed.

Belgian Malinois are not the biggest of dogs, so logically you would think they do not need a lot of space. However, they actually do require quite a bit of space due to their high energy and exercise needs.

While they could live in a smaller home (if provided with enough exercise), they tend to do much better in a larger home.

Besides, its best for everyone.

Otherwise, an owner would need to spent a considerable amount of effort keeping their Malinois occupied, busy, and entertained.

Or at the very least, taking them out for more rigorous movement and activity.

So, a home with a decent-sized yard with an outdoor area to play and other internal living space to let them roam is advised.

For the most part, the more space you can afford these athletic dogs, the better.

For this reason, it is typically not advisable to keep a Malinois if you live in an apartment or smaller home.

With all this being said, just having a big home will not suffice.

They do need to be included in family activities too.

This is not the kind of breed that you can leave to their own devices.

They are highly intelligent, and paired with their natural energy, must be kept engaged with their owner, both mentally and physically.

Factors That Can Influence Size In Belgian Malinois

Belgian Malinois are naturally strong, muscular, and lean. However, three different conditions can impact their final size, and be aware of Obesity, Bloat, and Thyroid Disease.

The Belgian Malinois is particularly vulnerable to obesity. And as they are so lean, to begin with, it is more observable in them when they do put on a few additional pounds.

And it must be avoided.

You must keep a Malinois at a healthy weight, or they can suffer from joint issues, metabolic dysregulation, digestive disorders, back pain, and heart disease.

At the same time, Malinois are known to be particularly vulnerable to bloat (also known as Gastric Dilatation and Volvulus).

This is more likely in this breed because they have a deep and narrow chest.

And bloating is a severe condition in dogs; the filling of gas and twisting of the stomach can cut off blood supply to essential organs.

It can be fatal if left untreated.

Retching, lethargy, and a distended abdomen are all signs to look out for, and if you were to do so, you would need to contact a veterinarian immediately.

In this state, a dog will not produce enough thyroid hormone, which is crucial to almost every bodily function.

It can lead to growth issues, weight gain, behavioral changes, and general lethargy.

It’s a mostly inherited condition and will require long-term treatment in the form of replacement hormone via medication.

If you do end up owning a Malinois, you will need to remain vigilant and monitor any weight or behavior changes.

Simultaneously, regular examinations from a vet should ensure any health issue is caught early and treated appropriately.

Keeping A Belgian Malinois At A Healthy Weight

Keeping a Belgian Malinois at a healthy weight can be achieved with a combination of diet and exercise.

This is assuming that they do not have a health complication, as outlined above.

Nevertheless, the following should ensure this dog (which is particularly vulnerable to weight gain) does not generally do so.

Belgian Malinois should be fed per their age, weight, build, and activity.

Growing puppies, for instance, should be fed entirely differently to a less active and aging dog.

The recommended daily amount for an adult is 2-3 cups of high-quality food per day. Dividing up this food into 2 meals is also advised.

Generally, the manufacturer’s instructions should give you an indication of how much you should be feeding.

Although you can always consult with your vet, and you can also monitor your dog’s weight.

Always seek out the highest quality food that you can afford. It should be high protein, low in cheap fillers and grains, and should be nutrient-dense.

Dog foods are commonly available for dogs’ different life stages, so they should be sought out accordingly.

Belgian Malinois require a lot of exercise to meet their high energy and to keep them sufficiently stimulated. But it also helps to keep them at a healthy weight too.

This breed should be given more rigorous exercise than a relaxed walk each day.

So, this could include jogging, hiking, or some play in a fenced area.

As an adult, the average healthy Malinois should be getting up to 80 minutes of activity per day, split up into 3/4 different sessions.

So, a 30 minute hike in the early morning, followed by 30 minutes of outside play in the early afternoon. And an additioal walk in the evening too.

It’s a lot, but otherwise, they will not be content.

There is one caveat here.

Puppies require much less exercise to begin with, and must be introduced slowly and carefully.

As they are still growing, it is imperative to protect their joints. If you fail to do so, it can result in growth problems.

Here are some general recommendations:

After their first birthday, they can start to jog. Although, you still need to be careful not to overdo it here.

Be careful of when you run and how long for.

Once your Malinois reaches their final size at 16-19 months, you can look to increase the distance and time further still.

There are three ways to check the weight of a Malinois – a visual examination, through the rib-test, or by the scale.

When observing a Malinois, you should be able to see their waist (and some definition).

From there, you can always place your hands down their back, thumbs inverted to the spine. You should be able to feel the ribs.

If you cannot, it typically indicates they are carrying some excess weight.

Alternatively, you can always weigh your dog or get your vet on your behalf.

Your dog should gravitate toward the breed average, respective to their age and sex.

Just consider that there will always be deviations from the norm.

But if they are a little overweight, you may need to consider their feeding, and perhaps cut back on the treats!

Belgian Malinois are not the biggest of dogs. Medium-sized and typically lean and muscular in build.

But, due to their high energy and exercise needs, these are not the dog to keep unless you can afford the space.

And for this reason, they can be quite a challenge to own and take care of.

They need to be kept busy.

As such, this particular breed is often recommended to more experienced dog owners.

And they will certainly not be right for every family.

But this does not mean you cannot necessarily get one.

When properly trained and socialized, they can be great with everyone.

And they can do very well with children and other pets if raised around them.

Belgian Malinois are generally not known for being aggressive and instead quite the affectionate breed.

If you are looking for a dog to exercise with routinely and have the time and the right living space to satisfy its needs, you should start contacting reputable breeders right away!

Is a Belgian Malinois a medium dog?

Some Belgian Malinois dogs fall into the medium classification, others in the large classification. Hence the breed, in general, is often classified as medium-to-large.

Is a Belgian Malinois a large breed?

The Belgian Malinois is considered and classified as a medium-to-large-sized breed. It depends on the individual dog in question. They are similar in height to German Shepherds and Rottweilers and similar in weight to Rhodesian Ridgebacks.