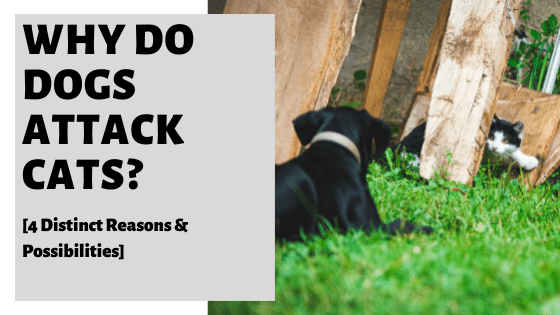 I think it’s fair to say that dogs and cats have an interesting relationship with one another. While they can peacefully co-exist in time and with sufficient exposure, before that time it can get pretty hostile. But why do dogs have a propensity to attack cats? Is this normal or even expected? And can anything be done to stop it? Well, here is everything you are going to want to know.

So, why do dogs attack cats? A dog will likely attack a cat because he gets carried away by his natural instinct to hunt prey. This hunting instinct is stronger in some dog breeds than in others. Another reason could be because the dog is ill or because he’s protecting his food or territory.

It isn’t that dogs are cat-haters: they just have natural instincts that can manifest as aggression towards cats.

Just as they can act out aggressively towards all animals; even young puppies or other dogs.

But let us explore why cats may be at the other end of a dog attack before moving on to when they are most likely.

Dogs typically attack cats due to their territorial nature, their high instinctive prey drive, as a response to injury or illness, or due to the trauma caused by a previous experience with a cat.

Let us explore each one more closely.

A dog may attack a cat simply because he’s protecting his territory.

For dogs (and for cats), their territory includes not only your home but their food, favorite toys, preferred places to sleep or play, and their favorite humans!

Seeing The Cat As Prey

Hunting dogs or other dogs who have been bred to seek out and kill prey can attack cats more readily than some other breeds.

A dog who is used to chasing foxes and other wild animals can see a cat as another animal to chase and hunt down.

Even a well-fed dog can see a cat as a moving protein source that could make a tasty meal!

We all can feel a bit grumpy when we aren’t feeling well, and the same is true for our animal friends.

Some dogs may lash out at cats (or other animals) if they are in pain, injured, or are suffering from a medical condition.

It could be that the cat has wanted to play at the wrong time – this is particularly true for animals who normally get along.

If you spot your dog suddenly growling at his feline friend, he could be feeling unwell.

Past Experiences With Cats

Some dogs could have had bad experiences with cats in the past, making them more susceptible to attack cats.

Perhaps the dog chased a cat when he was a puppy, and the cat turned on him and frightened him.

Cats can be very vicious when they are feeling threatened or cornered, and they can do quite a lot of damage to a puppy (or even an older dog).

If your dog has had bad encounters with cats before, he will likely feel threatened anytime a cat crosses his path.

Is It Normal For Dogs To Attack Cats?

It is considered normal for a dog to be wary, or even attack a cat given the opportunity. This is something that is shared by all breeds, and dogs of all different ages.

There are a few reasons why it’s normal for some dogs to attack cats.

It’s only natural for your family dog to want to protect you.

For all you know, your dog might see an unfamiliar cat as a potential tiger who could hurt you.

Your dog’s priority will be to save you from being attacked, so he may strike first out of his love for you.

You are part of his pack, and he will do anything to keep you safe.

Dogs And Cats Are Natural Enemies

Even though many dogs and cats can get along quite nicely and even be the best of friends, we often forget that dogs and cats are descendants of wild animals.

These animals would be natural enemies in nature, and they would most likely attack each other.

Your dog may be trying to show the cat that he is the alpha male, the leader of the pack. And the cat may or may not agree!

When Are Dog Attacks On Cats More Likely?

Dog attacks are more likely on cats if they are of a certain breed, they are injured or unwell, or if your dog is particularly fond of rough play.

Depending On The Breed

Dog breeds with a strong prey instinct will be more likely to want to chase cats and could get carried away to the point where they may seek to harm them or even kill them.

Here are the dog breeds with the strongest prey drives:

If you already have a kitty in your home, it’s worth thinking twice before getting one of these breeds.

Exceptions can happen, though, particularly if the dog and cat grow up together.

If Your Dog Is Injured Or Unwell

If your dog is unwell or hurt, he may be more likely to lash out at anyone who comes near, and that includes cats.

A dog who is poorly will usually want lots of rest and cuddles from you rather than have to deal with other animals.

Elderly dogs are also less likely to tolerate rambunctious kittens, for example, so bear in mind your dog’s preferences if you introduce a new cat into your home (see below).

If Your Dog Likes Rough Play

If your dog likes rough play, he can be more likely to get overexcited in his play and attack a cat unwillingly. He may think it’s fun, but the cat won’t!

How To Prevent Dogs From Attacking Cats

Here’s what you can do to prevent dogs from attacking cats.

Keep Your Dog Away From Cats

If your dog has had traumatic experiences with cats in the past, or he simply has a strong dislike of them, the best thing is to make sure he stays away from cats.

You don’t want your dog to cause harm to another animal or for him to get injured.

Cats can cause a lot of damage with their teeth and claws, so the most effective solution is to supervise your dog to make sure he doesn’t have to deal with cats.

If you are bringing home a dog or a cat, you may wish to get an animal that has lived with other animals before.

A dog who lunges at any cat he sees will probably not do well with a cat in his home.

If your dog loves chasing things (playing fetch, etc.), then perhaps a cat isn’t the best choice of a companion, especially a cat who might run away. Your dog could think the cat is playing chase and his prey instincts are more likely to kick in at those times.

Introduce Your Dog To Cats Gradually

If you want your dog and a cat to get along rather than fight with each other, there’s a way to introduce them that will help them stay calm and get used to each other.

Choose the Right Place for Them to Meet

Pick the right location for the dog and cat to meet each other. Don’t take one animal to meet the other in a shelter – have them meet in your home.

If you prefer for your dog to meet another cat first, ask a friend who has a ‘dog-savvy’ cat if your dog can meet their pet. Supervise to see how your dog (and the cat) react.

Keep Them Separate for a While

Keep your dog and cat separate for a while so that they don’t have to live with each other 24/7.

Use a baby gate or another method to give each animal his own space to roam. Give both of them time to get used to each other’s scent.

Allow Interaction With The Dog On A Leash

Continue this process until both animals are relaxed in each other’s company. Don’t leave them unsupervised, however.

Let the dog and cat spend unsupervised time together once you are sure they won’t hurt each other.

They need to have been in each other’s company for at least a month with neither animal feeling stressed.

If your dog stares at the cat, try distracting him with a happy voice, with a treat, or by gently guiding him away using the leash.

Let him have the treat when he’s away from the cat.

Repeat these steps until your dog is no longer overly focused on the cat or barrier.

If you observe any of the following signs, either the match won’t work, or you’ll need a trainer’s help:

What To Do If A Dog Has Attacked A Cat

If your dog has attacked a cat, you will want to make sure that both animals aren’t too badly injured.

A cat’s claws can cause serious injury to a dog – cuts can run deep, and a dog’s eyes are particularly vulnerable.

A well-placed scratch to the retina could even blind your dog.

If your dog has been injured by a cat, take him to the vet to make sure that no serious harm has been done.

You don’t want any wounds to become infected.

Of course, the same goes for the cat – some dogs can cause quite serious harm, too.

For dogs that have strong and continuous urges to harm cats, you may wish to enlist the help of a professional dog trainer.

A good trainer will give you advice for things to do when at home and out and about, and you can train your dog to control his urges to attack.

Patience, though, is essential for all kinds of training.

Even though it’s normal for a dog to try and attack a cat, he can learn that this is not acceptable behavior.

Some dogs can learn that not only are cats not very tasty, but they can make cuddly friends.

It’s just a natural instinct and something that comes naturally to them.

That being said, just because it can happen does not mean it should.

Not does it mean that there is little you can do about it?

In fact, as an owner of a dog, it is your responsibility to ensure that attacks do not happen.

And if it were to unfortunately occur, it’s essential that you do all that you can to prevent it from happening again – whilst in the immediate realm of time, ensuring both animals are okay!

Wondering about other animals attacking your cat? My other guides may be for you: