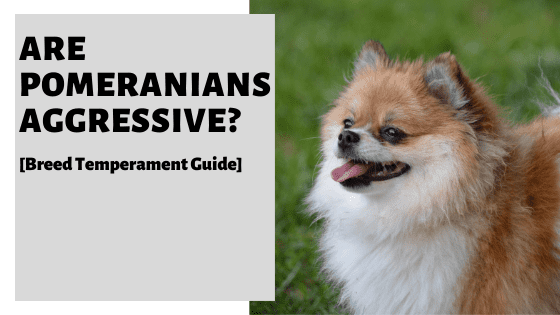 If you are considering getting a Pomeranian as your next family dog, of course, you will want to know if they are aggressive. Are Pomeranians good with children? Do they get along with other dogs? What about with strangers? Here’s what you’ll want to know before getting one of these tiny breeds.

So, are Pomeranians aggressive? Pomeranians aren’t necessarily an aggressive breed of dog, although they can become aggressive without proper training when they’re puppies. Aggression can be prevented through adequate early socialization, particularly in the first 16 weeks of their lives. Socialization prevents fear and, therefore, aggression.

One thing is for sure with Pomeranians, and that is they’re confident.

These feisty little dogs think they’re bigger than they really are.

They won’t back down when confronted with larger dogs.

So this is something you will need to bear in mind, especially if you own other dogs already.

Nevertheless, let us now take a closer look at the rest of and typical Pomeranian temperament to get a more round and thorough understanding as to what these dogs are really like.

And then we will head back to aggression specifically, so stick around!

What Is The Typical Pomeranian Temperament?

Typically, Pomeranians are alert, curious dogs who have a strong, stubborn streak. Poms tend to be suspicious of strangers, and if they are frightened, their fear can quickly turn to aggression. Often they will bark when confronted with strangers.

Pomeranians are independent and courageous dogs with minds of their own. These dogs do well with other animals, and they usually enjoy meeting new people.

These dogs make very good watchdogs, as they are known to bark if they sense anything out of the ordinary.

You will want to train your Pom to stop barking on command, though, because otherwise, they could bark all day long.

Well-trained Pomeranians are playful while also enjoying some lap-time with their people.

They are also quite good at learning tricks. Many Pomeranians are being trained as:

If you have a Pomeranian puppy who is excessively shy or aggressive compared to his littermates, know that these traits are unlikely to disappear as your dog grows.

Because Poms have such a strong, stubborn streak, they can be difficult to housetrain – although not impossible. Crate training is also essential when they are young.

Are Pomeranians Likely To Bite?

Pomeranians won’t usually bite unless you haven’t established yourself as the top dog in your home. Given their strong characters, these dogs will be happy to take over as leaders and can then start to snap.

Most of the time, a Pomeranian won’t bite out of aggression. Usually, biting comes from play nipping (normal behavior in puppies) and teething problems.

Nipping can become a habit if you don’t treat the problem quickly. And a Pom’s teeth are very sharp!

Generally, Poms will nip rather than bite: quick snaps in the air, rather than clamping down their jaws to draw blood.

Some nipping is normal behavior among Pomeranian puppies, particularly during play with their littermates.

They learn naturally not to bite too hard – their siblings let them know right away with a yelp if they’re being too rough.

Like all dogs, puppy Pomeranians learn about the world through their mouths, so some chewing and mouth exploration is normal.

What Can Make Pomeranians Aggressive?

If your Pom is in pain, he may nip anyone who comes near.

Dogs in pain can feel threatened even by family members, and they will protect their bed if anyone gets too close.

Nipping from his resting place is a natural, self-protecting reaction that your dog may do if feeling unwell.

If your dog nips (often growling at the same time) when you try to pick him up, it may be that he’s injured himself.

Any pressure on an area that’s painful will cause the dog to nip.

A joint out of place or another injury may be the culprit. Sometimes it’s only a few days later – once the swelling has started – that your dog may nip for something as simple as putting on a collar or harness.

It’s as if your dog is saying, “Please don’t touch me; it hurts!”

Fear can also make a dog take an aggressive stance, which tends to come out as nipping, growling, or even trying to bite.

Pomeranians can be afraid of strange people or dogs as well as loud noises or chaotic situations.

If your dog is between 4 to 9 months old and is biting, the most common reason would be teething.

Puppies this age will often nip at fingers and hands when you try to handle them, which can be very frustrating.

If teething is the cause of your dog’s nipping, here’s how to sort it out.

Show Your Dog That Nipping Is Not OK

Select The Right Kind of Toys

Make sure the chew toys you select offer your dog benefits such as gum relief. You can have several different kinds (soft ropes, solid rubber with nubs, etc.)

You can put toys in the freezer so that they’re nice and cold. By offering your dog healthy options for chewing, he will be less likely to nip at furniture, hands, or fingers.

How To Prevent Aggression In Pomeranians

Here are some ways to prevent aggression in Pomeranians.

Dogs are social animals who live in packs, and there’s always a pack leader whom everyone else follows. You want to make sure this is you!

As the leader, your dog looks to you to learn right from wrong.

Here’s how to get your dog to see you as the leader:

Train Your Dog Not To Nip

Now that you’ve established yourself as the leader of the pack, here’s how to train your dog not to nip (if the nipping is not due to teething, see above).

You may have to do this over several days or weeks, but once your dog has understood, you won’t need to offer treats for good behavior anymore.

For most dogs, vocal praise with the right tone will continue to encourage acceptable behavior.

Train Your Dog To Accept Strangers

If your Pomeranian barks at the mailman or other occasional visitors, you may wish to do nothing about it – apart from making sure that your dog doesn’t bark for too long.

If your dog calms down once the mailman goes, you probably don’t have a problem on your hands.

If you want your Pom to act as a watchdog, you can even praise this behavior with a quick pat and then carry on with your day.

If, however, you have problems with your Pomeranian and visitors to your home, you may want to address this.

How To Prevent Aggression With Visitors

Get some friends or family members to help you. You’ll want to do this training every day:

You should notice an improvement within 1 to 2 weeks.

And while they are generally not aggressive when raised and cared for properly, this unfortunate temperament can take hold and become an issue if left unchecked.

So if you are serious about getting a Pom, be sure you are willing and able to commit to training, socialization, and true to your position as the leader of the pack!

But if you do so, you should have a great little dog that loves nothing more than a cuddle!