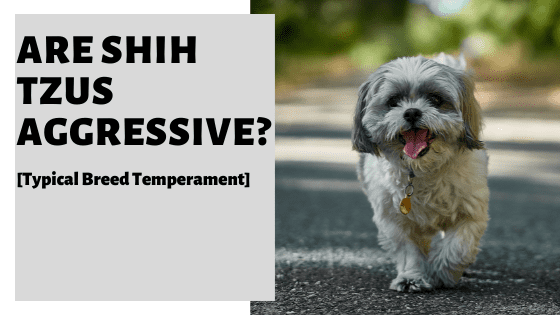 So, are Shih Tzus aggressive? Shih Tzus are generally not an aggressive breed. Some aggressive behavior can occur in individual dogs and is most often the result of insufficient training or socialization when young puppies: aggression is not an inherent breed characteristic. Most puppies outgrow any nipping by the time they are adolescents.

Although their name means “little lion,” aggression is not likely to be an issue with this breed of dog.

But it can be in some situations and contexts.

As we shall see as keep exploring below.

So keep reading; besides, this information could prove invaluable should you proceed and get one!

What Is The Typical Shih Tzu Temperament?

Shih Tzus have been bred to be companions, and this is reflected in their typical temperament. Loving, loyal, friendly, and generally good-natured.

Shih Tzus are generally happy, loving, and outgoing dogs who adore following their people from room to room.

They are lovers, not hunters, and make excellent lap dogs: they’ve graced the lap of many a monarch, even emperors!

They were kept as royal companions by the Chinese during the Ming dynasty.

Great With Children And Animals

Shih Tzus are also excellent dogs to have with children in the house. If your children know how to be gentle and play with a small dog, they will become fast friends.

Teach your children to play with the dog when on the floor so that they don’t carry him and risk dropping him: small heights are towering to the Shih Tzu, and he could easily get hurt from a fall.

Shih Tzus are pint-sized dogs and are therefore more fragile than larger breeds.

If you have toddlers, perhaps wait till your children are slightly older before getting a Shih Tzu – or be prepared to always supervise when your dog is around children (this is good practice anyway for all dogs).

Shih Tzus can also be trained for obedience, agility, and rally competitions. You can enjoy dog sports with your friend as well as cuddles on the sofa.

Shih Tzus are also great companions for other animals in your home.

Unlike hunting breeds, you won’t have to worry about your Shih Tzu wanting to hunt down your cat or guinea pig!

Your typical Shih Tzu won’t do well with being ignored: they want to be friends with everyone, human or not.

Shih Tzus were bred for accompanying their people, and they will melt the hearts of even the most standoffish dog haters.

Everyone loves a Shih Tzu, so don’t plan on much alone time when you take them out for a walk: these dogs make friends wherever they go.

You can live just about anywhere with a Shih Tzu, as they will be just as happy on a farm as in a city apartment.

Shih Tzus can be content anywhere as long as they have their beloved people who give them cuddles and affection.

Are Shih Tzus Known For Biting?

Although they typically will nip as puppies, Shih Tzus are not known for biting. Like all puppies, Shih Tzus will use their mouths to explore their surroundings, and if you train them from an early age not to nip you, biting shouldn’t become a problem.

Puppies will nip and bite as part of their play and when they are teething, so don’t encourage what starts as cute behavior: those teeth become very sharp as they get older.

Even a playful nip can break a child’s skin as an adult dog, so best to break this habit from the beginning.

Teething is the most common reason a Shih Tzu will nip or bite.

If your pup is teething, give him frozen chew toys to help soothe his gums. Don’t let him nip you – better to provide something that will bring him relief.

If your Shih Tzu is nipping or biting while playing with you, this is a habit he’s carried over from puppyhood when siblings will commonly bite each other playfully.

Your dog doesn’t mean to hurt you: he’s just getting carried away, and he needs to understand that nipping hurts you.

What Can Make Shih Tzus Aggressive?

Here are some things that can make the normally placid Shih Tzu aggressive.

If your dog is frightened, chances are he will want to defend himself as best he can. For a dog of such a small size, nipping, growling, and biting may be his only means of defense.

Usually, your dog will let you know if he’s scared with a little bark. If whatever is frightening him doesn’t back off, he may start growling, showing his tiny but very sharp teeth. With continued contact, he may then snap or possibly bite.

When puppies are small, they are accustomed to fighting over food. Puppies tend to be overprotective of their food for this reason.

Wanting To Be Dominant

If your Shih Tzu wants to be top dog, he may use aggression as a means to show that he wants to be in charge.

While this kind of behavior is most often seen in puppies struggling to dominate the pack, a dog can sometimes carry this over into adulthood. If your dog thinks he’s in charge, it’s up to you to put that right.

If your Shih Tzu suddenly starts biting or displaying other kinds of aggressive behavior for no apparent reason, you may wish to take a trip to the vet.

How to Prevent Aggression in Shih Tzus

Here are some ways to prevent aggression in your Shih Tzu.

When you see puppies playing together, if one of them bites the other a bit too hard, you’ll hear the puppy squeal in protest.

This lets the other puppy know that their nipping was too rough and that they need to back off.

Do the same if your dog nips you – he’ll soon get the message that it hurts and that it’s not OK. You may feel a bit silly doing this, but your dog will understand.

If you don’t want to squeal, you can try a firm command such as “no” or “stop!”

The idea is to communicate to your dog that he has hurt you and needs to stop.

Some puppies won’t like this because it’s like being told off: they may seek reassurance from you, but don’t give it!

Ignore them for a few moments by turning your back on them.

Hard as it can be to ignore these adorable dogs, you’re better off communicating a clear message that nipping equals no attention.

Don’t use punishment as a means of trying to discourage bad behavior – your dog will only become frightened if you try hitting them as a deterrent. Instead, praise good behavior.

It can be tempting to play back when your puppy is nipping and rolling around with you, but if you do that, you’ll be sending the signal that nipping is OK.

You’ll then achieve the opposite of what you want: more nipping!

Resist the temptation to react back: try squealing and then ignoring them, which is much more effective.

Use Chew Toys, Not Your Hands

When playing with your pup, you can use chew toys to teach them that hands are not for nipping.

By focusing their attention on the chew toy, they will learn that fingers and hands are not for rough play.

They’ll associate the chew toy with playful nips rather than your fingers.

You want your dog to accept your fingers near his mouth in case you have to examine their teeth or gums.

One way to do this is to feed your dog treats or a snack with your fingers – pop it into their mouth gently.

They will soon become used to your fingers near their mouth without feeling the need to bite them.

Here are the ones to get: Best Treats For Shih Tzu [And Why, When & How To Feed Them]

Your puppy needs to know that you are top dog. An easy way to assert dominance is with their food bowl.

If your Shih Tzu is aggressive around food, or you think they are trying to dominate you, try this:

Over time, your dog will know that you are in control of the food, and if they try to bite, they won’t get what they want.

Socialize Your Shih Tzu With Other Dogs

Shih Tzus are social animals, and the more you socialize them with other dogs and people when they are small, the better. Dogs quickly learn from each other what’s acceptable and what’s not.

You can always reach out to a qualified trainer or expert staff at a doggie daycare center if you want more ideas or opportunities for your dog to make friends.

The typical Shih Tzu temperament is one of playfulness, gentleness, and affection.

It’s not one of aggression, for the most part.

That being said, nipping is common in puppies of the breed, and there can be certain situations where they may resort to aggressive behaviors.

With the right level of care, thankfully, these displays are not something you should expect nor see very often.