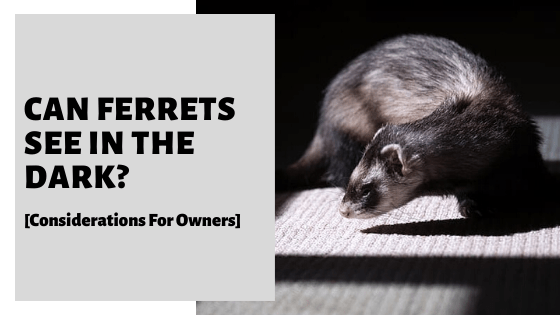 If you own a pet ferret, you may have some questions about their eyesight and how they can navigate during periods of darkness. You may have even noticed that they are active at certain times of the night. But what does this mean and is there anything that you need to be aware of?

So, can ferrets see in the dark? Ferrets do not see very well in very dark conditions, and equally, struggle to adapt to sudden changes to brightness. However, ferrets’ eyes work best and well in low-light conditions, where some light can be used.

Ferrets even possess slit pupils and a reflective layers inside each eye which helps to detect and then use the light available and help them to see in low light conditions.

This is likely an inherited trait that has been used to hunt during the twilight hours for ferrets and closely related rodents in the wild.

Let us now take a closer look at the topic, including all that you need to know to help you look after your ferret as best you can.

Do Ferrets Have Good Eyesight

Ferrets are actually known to have quite poor eyesight. Well in comparison to the traditional sense of the word and how we see as humans anyway.

Ferrets have what is known as ‘binocular vision’ – due to the fact that their eyes are positioned more on the side of their heads.

A ferret will mainly look forwards and turn their heads to the side to look at objects.

They suffer from depth perception issues and nearsightedness; not being able to make out things in the distance very well.

Equally, they suffer from a blind spot just under their nose (which they rely on smelling whatever may be positioned here instead).

As a ferret owner, you, therefore, need to ensure their safety – stopping them from climbing and falling off objects and furniture which can happen quite easily.

This is why some ferrets are likely scared of heights or being held up high.

This is added to the fact that they can only see the color red, with everything else appearing as a shade of grey.

That being said, they are known to be able to see in great detail with things up close and rely on this vision heavily to see other ferrets and to interact with them accordingly.

This can be seen in their body language patterns and behaviors – like the bottle brush and vibrating tail displays.

The eyes of ferrets do best during the “twilight hours – at dusk and/or dawn. This is likely an inherited trait that descended from ancestors who used to hunt during these hours.

As such, ferrets cannot see very well, if at all in complete darkness.

On a similar token, they do not adapt well to bright light or sudden changes. You, therefore, need to be careful as an owner and allow your ferret time to adjust to the light.

That being said, ferrets are able to see much better than we can in low-light conditions.

You may notice as a ferret owner, that your pet’s eyes seem to glow in the dark. This is your ferret reflecting any light it can obtain to help them see.

In fact, a ferret’s eyes can appear to glow in different colors. This depends on the species of the ferret and the color of their eyes:

Another factor that helps ferrets in low-light conditions is that they have horizontally slit pupils in their eyes.

This improves how they detect surfaces/edges and their ability to see more in low-light conditions.

With such eyesight, it comes as no surprise to learn that Ferrets are crepuscular.

This is essentially where an animal will live in accordance with the rise and fall of the sun. A crepuscular animal is one that is most active during dawn and dusk. Which of course, is when their eyes work best.

For this reason, a ferret will spend around 14-18 hours per day asleep. Becoming more and more active when the moon begins to shine.

It is during these twilight hours that a ferret will partake in most of its behaviors and activities. This includes burrowing, foraging, mating, and so on.

Outside of the twilight hours, their vision will alert them to basic movement and shapes, but they are also heavily dependent on their other senses – especially hearing and smell.

What ferrets may lack in eyesight, they make up for in their ability to hear. They are known for their highly developed sense of hearing.

In fact, they are able to closely identify the direction and distance of a sound source.

They have numerous hearing receptors positioned in their ears to help them understand their environments.

These specially-tuned ears have developed as a survival mechanism and response; allowing them to hear predators long before they approach.

Because ferret ears are so sensitive, you must be careful as an owner and take this information into consideration.

You’ll need to keep them away from loud and noisy spaces, refrain from playing loud music closely, and ensure you can house your ferret in a room in which they can become comfortable.

A noisy environment will stop your ferret from being able to relax – and sleep during the daytime hours.

When interacting with your ferret, you should equally look to use a gentle tone.

Ferrets Have An Excellent Sense of Smell

Second to ferret hearing is their excellent sense of smell. First and foremost, they use this sense to communicate with other ferrets in their environment.

They also deposit their urine to scent-mark and produce specific skin oils that are largely affected by circulating hormone levels.

This is one of the reasons why owners observe the ‘musky’ smell and why they have gotten quite the reputation as a ‘smelly pet’.

Scent is largely how ferrets learn to navigate their landscape, recognize the young and other ferrets that they know.

This is why it is not generally recommended to bathe them. At least frequently.

When it comes to finding food, ferrets will also follow their nose closely.

In the earlier days of their life, this is how they develop a sense for prey.

In fact, ferrets are known even to refuse to eat prey whose smell they have not learned in their younger years.

Ferrets use their nose and smell to navigate the environment and hunt out prey.

Ferrets are unable to see in the dark; however, they can see very well in low-light conditions.

Despite having very different eyesight from many other animals and humans, they have inherited and developed various mechanisms to improve their sense of sight during twilight hours.

Equally, they depend heavily upon a remarkable sense of both hearing and smell.

This enables them to safely navigate the environment, find food, steer clear from predators and find a mate!

There are some things you, as a ferret owner, should do with this information. Since they have very poor depth perception, they are known to easily fall from furniture, objects, and heights.

Therefore be especially careful and even prevent them from getting up high.

Keep ramps and accessories in their cage easily accessible and low.

They do not like nor respond well to it so be sure not to wake them during the day when they are asleep.

Ultimately, your ferret will be most active during the twilight hours of dusk and dawn.

So long as you ensure that their environment is appropriately lit during this time, and quiet, your ferret can do what they need to do.

You won’t even likely hear them, either.

Want to learn more about ferrets and their interesting traits and behaviors? Then be sure to read my guides below: