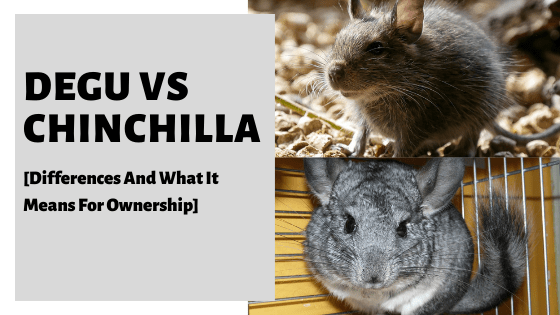 Not sure what the difference is between a degu or a chinchilla? Cannot decide which one is right for you and your family as your next pet? I understand. I’ve been there. That was until I spent some time researching the rodents to find out exactly how they differ and compare. I’d like to share my findings here with you today.

While both are rodents, as you can see degus and chinchillas differ in many ways.

And these are just the main differences.

There’s a lot of little nuances too that we will soon take a closer look at.

Either way, when it comes to choosing a new pet you need think ahead.

Besides, what pet you choose can have a drastic impact on their care and your involvement.

But first and and foremost, it actually helps to run through a quick intro about these animals.

What Is A Degu?

Degus are small, intelligent, and social rodents, native to the Matorral ecoregion of central Chile.

In terms of their size, they are larger than your average hamster, but smaller than your typical rat.

Degus will typically live for between 6-8 years, although with good care have been known to live up to 13 years of age.

What Is A Chinchilla?

Chinchillas are also small and social rodents, native to a complex network of burrows in the Andes mountains in South America. They live in colonies called “herds” and do so at high elevations.

There are actually two different species of chinchilla.

Each species will grow to different sizes.

Short-tailed chinchillas will typically reach 11-19″ in length and weigh around 400g.

Long-tailed chinchillas typically reach 8-10″ in length and weigh up to 1kg.

Long-tailed chinchillas are those most commonly kept as pets.

Visually, chinchillas are known for their dense grey coat. Although, through breeding are now more commonly seen in beige, white, and ebony colors.

Chinchillas have a very fluffy tail, which is long and coarse. They also have fleshy foot pads.

Chinchillas will typically live for between 10-20 years.

Degus are very hands-on pets that require a lot of time, attention, and care. For degus, nothing makes them happier than when routinely playing and exploring.

And degus can become very tame; particularly with owners who routinely interact with them.

In time, owners can look to stroke and touch their degu. Some even become fond of belly rubs and may even resort to grooming their humans.

That being said, they need to be handled with care; or otherwise, they can quickly become stressed. They are especially sensitive to sudden movements.

This means that they should be picked up appropriately, never by the tail, and it should always be done so in a slow, calm and gentle manner.

As keen explorers; it’s a good idea to keep these pets engaged in foraging activities. They should also have sufficient toys to chew on.

Degus need to be kept in a sufficiently large cage, and one that has been designed with their activity and high energy in mind.

Experts generally recommend that they are kept in a cage that is at least 24″x24″x18″ in dimensions.

At the same time, degus appreciate being able to climb and run; so you should ensure that the cage you purchase has multiple levels, and even areas for them to dig too.

As they are prone to chewing (their teeth are constantly growing), it is advised to purchase a metal-based cage is strongly advised over plastic.

Degus are known for being relatively simple to care for.

Diet is perhaps one of the main things to consider; but they can be fed a commercial feed that was designed for small rodents.

Fresh vegetables are also a great addition to the diet, and can be used as treats.

Dust baths are mandatory for these rodents as they have a keen desire to keep themselves clean and groom themselves regularly.

The outright purchase of the degu is likely to cost you between $25-$100 – depending on where you get them from and availability.

The initial setup cost, including their cage, will also likely range from $150-$300.

Ongoing costs, such as food, ad-hoc purchase of toys, etc, can set you back between $10-$30 per month.

Chinchillas are more hands-off pets that are generally quite shy and quiet. As nocturnal animals, they will spend the majority of the day sleeping – instead being more active around dusk and dawn.

And this means that generally, they will not want to be interrupted during the day.

This of course, can have its downsides – particularly if you have young children who want to interact with their pet!

At the same time, chinchillas are quite cautious, wary and skittish – not entirely keen to be held.

That being said, with time, patience and persistence they can become familiar of, and confident in their owners.

So, with careful handling from a young age, they can become more tame.

However, due to their larger size, they have a higher minimum cage requirements to degus.

Experts generally recommend that they are kept in a cage that is at least 36″x24″x24″ in dimensions.

Of course, this may need to be larger depending on how many chinchillas are to be kept.

While keeping one chinchilla is perfectly fine, they can be kept in same sex pairs.

More space can help to prevent, or limit, any risk of potential fighting in such instances.

The position of their cage is even more crucial; as they need to be able to sleep during the day and away from any consistent or loud noises.

At the same time, the room should be of sufficient temperature and not kept too cold or warm. Chinchillas can overheat at temperatures over 26.7°C (80°F).

Chinchillas should be a fairly similar diet to other rodents; hay, grasses, and pellets should be fed often, while fresh herbs and flowers make a good dietary addition.

Some vegetables and fruits can be offered as treats, along with small serving of nuts here and there.

Again, chinchillas will need to be able to routinely dust bath.

They should never be bathed in water, however, as this can lead to extensive stress and even illness.

The outright purchase of a chinchilla is likely to cost you between $100-$200- depending on where you get them from and availability.

The initial setup cost, including their cage, will also likely range from $150-$300.

Ongoing costs, such as food, ad-hoc purchase of toys, etc, can set you back between $10-$30 per month.

Chinchillas are therefore slightly more expensive than degus, on average.

Should You Get A Degu Or A Chinchilla?

Whether you decide to get a degu or a chinchilla will ultimately come down to personal preferences and circumstances. Neither rodent is best, nor right, for everyone.

That being said, there are some questions that you can ask yourself to help you to come to a decision, these are:

These are of course, just a few starting questions.

You may want to purchase a chinchilla or a degu out of their appearance alone.

Or it may come down to availability.

Either way, it is generally advised to visit your nearest or local pet shop and see the animals for yourself.

This way, you may find that you naturally gravitate to one or the other.

On reflection, degus and chinchillas are actually very different.

Not in just how they look, but how they should be cared for and raised too.

The truth is, whether you decide to adopt a degu or a chinchilla, you’ll need to be mindful of their very unique needs and preferences, either way.

That being said, these rodents do share some key similarities.

Diet, multi-level cage requirements, dust-bathing – these are perhaps the most significant ones to consider.

All in all, choosing between them quite the challenge.

So visit your local pet store, take a look and be mindful of your preferences and circumstances.

Both make excellent pets, but one is likely going to be more suitable for you than the other.