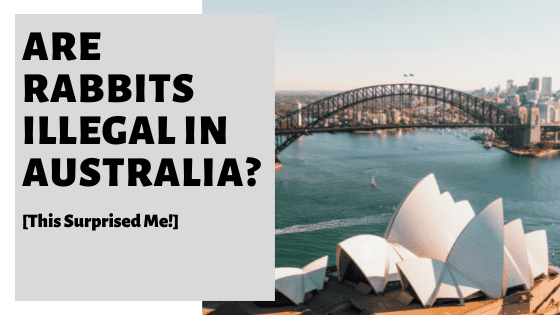 Are you a resident of Australia searching for a new pet? Perhaps you’ve emigrated over and wondering whether you can take your rabbit with you, or get one later down the line. Either way, you’ll want to know what this country’s laws and regulations are for this particular small mammal. Well, here is what you are going to need to know.

So are rabbits illegal in Australia? Rabbits are illegal to own in Queensland. However, they are allowed to be kept as pets in the following states: New South Wales (NSW), Tasmania (TAS), Victoria (VIC), Australian Capital Territory (ACT), Western Australia (WA), and South Australia (SA). That being said, strict rules are guidelines must be met in order to keep one.

So, whether you can own a pet rabbit in Australia depends entirely on where you are in Australia and local laws.

And that’s the key here.

You are going to need to check in with your local state laws and regulations – they can differ, as we shall soon discover.

But first, what has Queensland got against rabbits anyway? And why are they banned there in particular?

Why Are Rabbits Illegal In Queensland?

Rabbits are illegal to own as pets in Queensland due to their potential destruction and risk/threat to local agriculture, native ecosystems and the environment should they were to be released, or escape, into the wild.

In fact, the Queensland Government make it quite clear in their pamphlet on these particular mammals:

“Rabbits are Australia’s most destructive agricultural and environmental introduced animal pest, costing up to $1 billion annually. They cause severe land degradation and soil erosion and threaten the survival of many rare and endangered native species”

We all know that rabbits breed incredibly quickly, and in large numbers.

A lot more so than in other animals.

So, there is the legitimate fear that they would quickly establish new wild populations.

In fact, there is a large population of feral rabbits in areas around Sydney and Tweed Heads that is the result of this very thing. Released or escaped rabbits.

The Queensland government does not want a repeat of that.

So, they have introduced a law to prevent it.

“The Biosecurity Act of 2014” – making rabbits a restricted species, and making any owner liable under the law should they proceed to get and keep one.

I have seen reports of a man facing a $60,000 fine for keeping a cluster of rabbits in his home.

Nevertheless, it is through such strict laws that Queensland has ensured it is the only state to keep an area largely free of rabbits.

Can You Get A Permit For A Rabbit In Queensland?

You cannot get a permit to keep a Rabbit in Queensland – it is not something the state will entertain or give out.

This is true regardless of whether they are desexed and registered.

In fact, the only permits that are available to keep rabbits in the state of Queensland are for those seeking them for public entertainment purposes (such as a circus), or for scientific and research purposes.

What To Do If You Have A Pet Rabbit In Queensland

Should you happen to have purchased, or managed to get a rabbit into the state of Queensland, you will need to proactively take measures to give up your pet.

Otherwise, you will be liable to prosecution.

Here is what the Queensland government recommend that you do:

The government would rather you humanely kill your rabbit than keep it.

So surrendering is the approach to take.

Either way, you should not release your rabbit into the wild under ANY circumstances.

Rabbits As Pets In Other States

While rabbits are considered a pest in all Australian states, interestingly, some states allow you to keep them as pets – so long as you abide by strict rules and regulations.

The following states will allow you to keep a rabbit(s) as a pet:

Nonetheless, it’s essential that you check in with each council or state to see if they have any specific guidelines for ownership.

For instance, if we take Victoria as an example – the guidelines are as follows:

You can read more about Victoria’s regulations here.

Otherwise, a simple google search of the following (or similar variations) can help you find the information that you need:

Look for government publications and websites that end in the following “.gov.au”.

Either way, when you find them you should notice similar rules and regulations in place that you will need to comply with.

Some may be stricter than others.

Rabbits are legal in Australia; for the most part.

Not in Queensland though, that’s the main exception.

That being said, if you do decide to own a rabbit in one of the other states you will need to be particularly mindful and behave as a responsible keeper.

And do check in with your local state.

You want to know exactly what you need to do, and when.

Besides, fines can be hefty and they can be avoided with a little research and preparation ahead of time.

Besides, these regulations will also help ensure you take the best care of your pet. And ensure you meet their needs, accordingly.

Are you still on the fence about what pet to get? Wondering what other animals may or may not be legal in Australia, and where? Then my following guides may be for you: