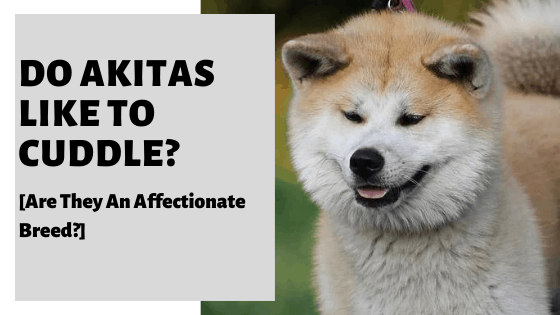 Akitas are large and powerful dogs, reaching 28 inches, weighing up to 40 kg (88 lbs) and being muscular in body type. They also have a dense double coat which gives them a somewhat fluffy appearance. But are they naturally open to cuddling, or do they turn tail and run at the thought of it? Are there any ways an owner can promote this form of affection? With these question in mind, I spent some time researching the temperament of this dog breed and their inclinations towards cuddling. You’ll find all the information related to the topic here today.

So, do Akitas like to cuddle? Akitas do like to cuddle. However, they save their cuddles for their owners and those who mean the most to them. Akitas are typically wary of strangers and are unlikely to show the displays of affection that they will do with their families and those that they know and trust. Akitas are loyal, and will soon become quickly protective of and seek companionship of their owners.

You can walk into some homes and their pet dog will almost knock you over trying to cuddle. This is not the case with an Akita.

If you walk into the home of someone who ones an Akita, especially one who has never met you, all you are going to receive is a guard stance and a dog who puts themselves between you and their owner.

So, while they can be quite intimidating for some, its entirely different if you own one. The Akita breed is renown for being loyal, friendly, and affectionate with their owners and those with whom they can trust.

Although not every Akita will come over and beg to be cuddled, most of them love nothing more than the close contact that cuddling with their owner brings.

The bond they form with their humans is a truly special one that cannot be broken, and the more you cuddle with your pet, the stronger it will get.

Let us now take a closer look at the breed, their typical temperament and how they respond to this kind of attention and affection. We will also be looking at why they may want to cuddle and how to promote this activity if your dog was to be more reserved. So be sure to keep on reading until the end!

What Is The Temperament Of An Akita?

Most Akitas have an excellent temperament towards people, although they do have the reputation of being somewhat aggressive.

The most common words used to describe an Akita are distinguished, loyal, stubborn, and fearless.

They were bred originally to guard Japanese royalty, and both their appearance and personality is testament to that.

Although they are not big barkers, today’s Akitas have not forgotten their original breeding, and they are fearless in guarding both their home and their family. Although they don’t bark very much, trust that your Akita is paying attention to everything that is going on around them.

They have the loyalty of a Pitbull when it comes to those they love, but Akitas can often be quite snotty when there are strangers around.

There is a famous story about Hatchiko, a Japanese Akita nicknamed “The Faithful Dog”.

Born in 1923, Hatchiko went to the train station every day with his owner and then returned again to meet him in the evening.

His master died suddenly at work one day, yet every afternoon Hatchiko kept going to the train station at the appointed time. Others figured out what had transpired and took over Hatchiko’s care and feeding, but he never loved another human.

After nine long years of fierce loyalty, Hatchiko died at the train station while waiting for his master. This kind of loyalty can never be taught. It just is.

The largest Akita temperament issue comes from their tendency to be aggressive towards other animals. This can often be prevented by early socialization and training.

In fact, it is vital because Akitas are huge dogs full of raw power when fully grown. They can also be disturbingly food aggressive. Because they have such a high guarding nature, an attack from an Akita comes out of nowhere, without the usual signs that you would see in a dog about to attack.

Most Akitas have eccentricities, but each one is an individual when it comes to what they like and do not like.

They are immensely intelligent and take to training easily.

You will want to make training a bonding and rewarding experience. However, Akitas will only respond to positive reinforcement training. Any type of punishment is likely to have your stubborn pet absolutely refusing to listen to you at all.

Akitas are very affectionate. However, this affection is strictly reserved for their humans. People outside the family circle are likely to be treated with aloofness, reserve, and distaste.

Akitas are born being ready to lay down their lives for the humans they love and anyone else is always perceived as a potential threat. The same as their ability to hunt, this is an inherent trait in the breed, and it cannot be bred out.

Unless you currently have, or have previously owned an Akita, you will be missing out on seeing what they are truly like – the playful and completely goofy side to them.

They adore to play and do extremely well when they are playing games that make use of their intelligence.

Why Would An Akita Want To Cuddle?

Akitas love to cuddle with their favorite people for several reasons. Lets look at the main ones below:

One reason that Akitas want to cuddle is because they are craving the attention, companionship, and love that comes with a good snuggle.

This is instinctive pack behavior and although Akitas are very independent, they have wants and needs just the way humans do.

Whether you are sick, angry, or even sad, expect that your pet will be right by your side just when you need them.

Akitas may also want to cuddle when they sense that there is a threat to you. Usually this would be a situation where a stranger to your pet tries to come to close to you.

They consider it their job to place themselves between you and whatever they perceive to be a threat, either real or imagined.

Why Would An Akita Not Want To Cuddle?

There can also be several reasons why an Akita runs the other way when you think it is cuddle time.

The truth is that there are millions of dogs who prefer their own company to ours, seemingly as if they are antisocial.

It does not mean that they do not love you, but rather that they prefer to show their affection for you in some other way. Here are some things to consider if your pet flat out refuses to give cuddles:

How Do I Get An Akita To Cuddle More?

Getting an Akita to cuddle more can sometimes take a little bit of work, but it is totally worth it in the end!

If you are ready to get some puppy love, you might want to give a few of these tricks a whirl to get your dog to snuggle up with you.

They are certainly not 100% guaranteed to turn your Akita into a lap dog, but they will not hurt, and they certainly will help.

Keep in mind that it is much easier to train your dog to be snuggly and cuddly when they are still puppies. However, that does not mean that it is impossible to teach an older Akita.

Research has shown that when dogs and humans interact with one another positively, both human and dog get a surge in a hormone called oxytocin, a hormone which has been linked to positive emotional states.

So, with this mind, here are some tips to try:

There are things that you can try to get your Akita to enjoy cuddling with you. However, each Akita has their own preferences as to what they like but none of them like to be forced.

Do not give up after a time or two. If you keep trying, they may come around. If they do not, at least you know that you did everything you could to try!

Akitas do love to cuddle; but only with their owners and those with whom they are familiar with and can trust.

If you own an Akita, you can expect a sweet, loving protector whom will do all they can to keep you and your family safe.

For this reason, this is not the kind of breed that a stranger should approach at the park and try to get close to. They will naturally be wary and they will do all they can to keep you from their owners.

Thankfully, Akitas are intelligent, so will be welcoming to house guests and visitors if their owners are at home and express a warm reception to the visitor(s).

Nevertheless, when owning an Akita, you’ll likely find they follow you about the house and seek time and companionship from you.

Early socialization for an Akita is crucial for this breed. Getting them plenty of exposure to new and friendly people should help to lower their innate wariness, though they will always natural be somewhat standoffish.

Equally, before getting an Akita, it is advised that you learn how to train this kind of dog and breed. They only respond to positive training methods, and you will need to build their trust in you through this process.

Training generally takes longer with an Akita than with other breeds. While intelligent, they are somewhat stubborn which can impact their ability to take on more positive behaviors.

Akitas are considered a challenge for first-time dog owners, and are probably not advised for those without some experience with dogs already.

That being said, those whom adopt an Akita, socialize, train and raise them well, will have a loyal, affectionate and friendly dog who will love nothing more than a cuddle with them and the rest of the family, including the kids!