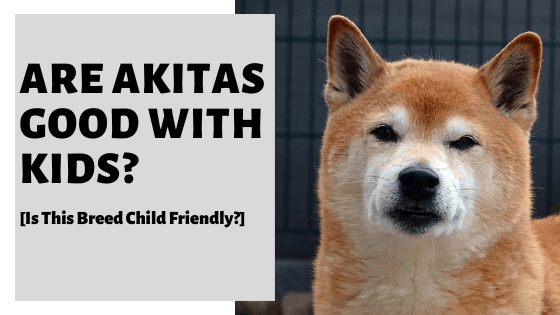 Akitas have a standing reputation for being protective of their owners, while often being aloof and silent with strangers and visitors. If you are looking to get an Akita and you are expecting or already have kids, it is a good idea to do some in-depth research ahead of time. Being a temperamental breed, you cannot always be sure how they will react with children. Thankfully, I have done all the research for you, so all you need to do is read this article to find out everything you need to know!

So, are Akitas good with kids? Akitas are not the best breed of dog for kids. This is because they are large, powerful, and headstrong; and can become aggressive if they feel the need to protect. They can also be possessive of food and toys and are generally not open to play and being fussed over. That being said, with consistent training and proper socialization from a young age, Akitas can behave safely around children and make great family pets.

Nevertheless, adults should always supervise interactions and play between children and Akitas and children should be taught how to properly behave around dogs.

For the same reason, Akitas tend to be more suitable for families with older children.

While Akitas are very intelligent and equally loyal, it is important to consider that they have an independent and stubborn streak in them.

Reaching up to 28 inches in height and 39 kg in weight, these are not small dogs.

Being naturally protective, socialization with other people, dogs and experiences is also a must.

With all this being said, owners do deep Akitas as family pets and so long as they are raised appropriately, not mistreated, and certain considerations are in place, they do make loving and loyal companions.

Let us now take a closer look at some of the most commonly asked questions about this breed and keep them alongside children.

We will be covering how to train your Akita to be safe around children along with some practical approaches to teach your children dog-friendly manners.

So be sure to keep on reading!

Akitas can be considered both kid and non-kid-friendly and as such, there is both a yes and no answer to this question.

What makes the fundamental difference is how your Akita has been raised, treated and socialized.

Careful socialization is the key factor. If they grew up from puppies around children, there should be no problems. Equally, the better behaved the children and more familiar they are to the Akita, the better.

In Akitas raised around children, there is also the likelihood that they will even attempt to protect them; keeping a close eye on their movements and whereabouts.

For other Akitas who have not had the benefit of being around kids, can and will struggle with the noise and energy. Kids love to play, and not all Akitas will take to it so kindly.

Ultimately, the calm and reserved nature of an Akita is in direct conflict with the majority of kids.

For this reason, Akitas are often not recommended for those who have smaller children. This is simply because they refuse to tolerate any nonsense. They are not the type of pet that enjoys being climbed all over during playtime.

However, for families with older, calmer and more considerate older children, there are less issues that are likely to arise.

Are Akitas Dangerous To Kids?

An Akita could be a danger to a child, but again it depends on the dog, their individual personality, temperament, the context and how they have been raised.

It basically resorts back to their guarding instincts, and if they feel the need to ever act upon them.

The personality of an Akita is extremely complex, and this makes them a challenge to raise. This protective, powerful, and reserved with strangers breed are renown for their guarding instincts. They make excellent guard dogs for this reason.

This instinct can be dangerous when it is indiscriminate, so children are far safer with an Akita who has guarding instincts that are under control. It is only through effective and regular training that this is likely to occur.

Akitas tend to choose one family member with whom they are closest. Because of this, they could choose to attack anyone they perceive is a threat to their human, even a child.

And Akitas are so reserved that they generally do not give any warning of an attack in the making so there are no outward signs that they are upset.

This means that you are unable to step in to diffuse the situation and when danger is likely to arise.

We always have to remember the sheer size of an Akita, especially against a child. Even if an Akita is willing to play, accidents can occur unintentionally. Knocking over children can and does happen, as it does with all breeds of dogs.

Additionally, children need to be aware and learn that Akitas are protective of their items; be it their food and toys. Children should never attempt to take something away from an Akita, even well-trained ones, because this is when they are likely to react.

How Do You Train Your Akita For Kids?

Akitas have a high intelligence level, making them trainable to a high level. However, Akitas are not the easiest of breed to train.

As smart as they are, their will power is equally matched. They are not the type of dog that will listen just because you tell them to do something.

Akitas want to be the assertive one and they bore easily while during training.

Often their intelligence may be used in ways that further their own purposes. Training an Akita takes a large amount of cleverness on the part of the owner as well!

They only do well with positive reinforcement training.

Harsh training forms do not work well at all.

Above all, an Akita needs to be shown respect during training.

Teasing is not for Akitas and children need to know this as well. Children who are old enough should absolutely be included in training your Akita.

This allows your pet to realize that the kids are also to be obeyed when commands are given.

Akitas are food aggressive so your kids should know never to reach into their bowl while they are eating, but during training, they should be encouraged to give favorite treats as rewards for a job well done.

This way your pet will associate your children with only good things.

Besides the common commands like “sit”, “stay”, and “come”, with children in the home it is essential that your Akita also understands that jumping is not desirable.

The “down” command will be vital to ensuring that there are no accidental injuries. Akitas also do very well in agility if you wanted to consider continuing their training.

How Should Kids Behave Around Akitas?

Children need to know how to properly behave around an Akita as well. This is perhaps even more crucial, and something you will need to consider ahead of time.

Not for just your own pet, it is crucial that kids know how to act around all dogs. Keeping this in mind, there are several things that your child should never do around an Akita.

When it comes to teaching your children how to behave, be sure to install real consequences whenever they do something that could harm the dog, and by extension, themselves.

Animals need to be treated with kindness and respect, and that is a life lesson they can share with their friends as well.

Things To Consider When Owning An Akita And Having Kids

Choosing to get an Akita when you have kids, or you are expecting, should take plenty of careful thought on your part.

Here are some of the main considerations you will need to take into account:

Thankfully, Akitas are now being bred very carefully, with special attention being paid to temperament.

Because of this, the Akita breed is far less aggressive than it was previously.

That being said, we must always remember the nature of these dogs.

Akitas are a wonderful, loyal breed but they are not for everyone. For the most part, they are not best suited to families with young children.

They are not the easiest of breeds to train, but they do require plenty of it to behave properly and appropriately.

Socialization is also key; and the younger an Akita experiences new people, animals, contexts, environments, smells, and noises; the better for everyone involved.

There are many Akita owners who have raised this breed with young children, and successfully. That being said, there is work that goes into this and an experience of dogs is generally recommended.

At the end of the day, ensure you do your own research before you make the commitment to purchase a pup or adopt an Akita.

Remember, they will be with you for years to come so you have to be certain that you can give them all the time they need to make them the loyal and loving companions they can be.

Akitas can be a good family dog if raised properly, trained, and socialized from a young age.

Firm and loving discipline is required by owners of this breed. Akitas however, are not the best breed for families with young children and can be a danger if mistreated, even unintentionally.

Families with older children tend to do much better with Akitas and those where children have been properly taught how to behave around dogs and other animals.

Wondering what other dog breeds are good with kids? Check out my guides below: