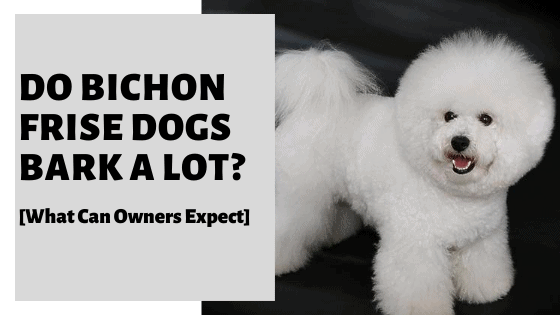 The Bichon Frise are one of those breeds who always seems to be happy and full of energy. But what what about barking? Is this behavior commonly displayed and what can you expect if you decide to own one. With these questions in mind, I decided to research into the natural tendencies, behaviors and traits of the Bichon Frise. I will be sharing all that I found here today.

Many people think that the barking is just a personality trait for the breed.

This isn’t the case and if your Bichon Frise barks a lot, you need to address the issue right away. It may even possibly mean a visit to the veterinarian.

Like in any breed of dog, training is essential. And don’t be surprised if it turns out that you’re the one who needs to be trained as well!

While they might be small and fluffy; when these dogs bark it can be irritating for owners and neighbors alike.

This is especially true if you cannot find the cause and are unable to reduce or prevent it.

So, let us know take a closer look at the Bichon Frise when it comes to barking.

We will also look at those situations when they are most likely to be vocal, and some proactive approaches you can take to keep the noise at bay.

Funny enough, even though many Bichon Frises bark a lot, the breed themselves, are not barkers.

So, if a Bichon Frise is commonly barking – there is usually a reason for such.

Bichon Frises are loveable and playful, and perhaps they love their people a little too much, so they bark, wanting to get, and keep, their owner’s attention.

And if you leave them alone for any length of time, they will let anyone around know what they think of it until you come home and then they are their happy selves again.

Bichon Frise owners need to remember that their cute little white fluff ball is a dog, and they need to treat them as such.

Bichon Frises that get coddled too much will also become barkers as they will become spoiled or stressed about all the cuddling.

We only have to look at the breeds history to get a further understanding of why they are not ‘supposed to bark’.

Bichon Frises date back till at least the 14th century, although the exact origin story of the breed is unknown.

It is believed to have originated in the Mediterranean and was an offshoot of the Barbet, of the Barbichon family of dogs.

Included in the Barbichon group of breeds are the Havanese, Maltese, Coton de Tulear, and the Bolgnese. All of these breeds are also from the Mediterranean and look similar to each other, so it is believed that they are all relatives to the Bichon Frise.

There are different versions as to how the Bichon Frise made its way to Europe, however, most people believe that the breed was brought there by sailors, though the country of origin and country of import remain to be contested.

When the Bichon Frise made an appearance in Europe they became popular with nobility and were bred to be companions.

Of course, if you are part of the noble class in Europe back in the 14th and 15th centuries, you can’t have a yappy companion dog. Bichon Frises were quiet companions and got along just fine among the nobility.

When Are Bichon Frise Likely To Bark?

Bichon Frises will not bark unnecessarily. In their minds anyway. There are common reasons when you can expect this breed to become more vocal. These are:

Bichon Frises need a lot of attention. I mean a lot. They are happy, lovable, and friendly and expect to be the center of attention all the time.

If they are being ignored, they can act out and start barking to get attention.

The breed also doesn’t do good being by themselves. Bichon Frises are better off, and happier, when they are with their people.

They suffer from separation anxiety and being alone for too long can lead to barking and destructive behaviors such as obsessive chewing.

Other situations that can cause your Bichon Frise to bark is being around unknown people and other dogs.

If they are uncertain, or fearful, they could bark and nip at the child or dog. This is common in Bichon Frises who have not been properly or sufficiently socialized from a young age.

Some owners unknowingly make the barking worse by either over cuddling their Bichon Frise, or by punishing them. This can overwhelm them and stress them out, which makes them bark even more.

Many people love the small size of the Bichon Frise and love to baby them and carry them everywhere.

This is detrimental to the dog, and much like a child, they will act out when spoiled and continue to expect exceptional treatment and attention.

If none of these appear to be the cause of your Bichon Frise’s barking, then you should contact your veterinarian, as there may be a medical issue going on that you don’t know about. Barking is one of the ways in which dogs communicate with us.

A call to the vet might be needed if your Bichon Frise normally doesn’t bark and then all of a sudden starts barking, especially if there doesn’t seem to be a reason for it.

How Do I Stop My Bichon Frise from Barking?

If you own a Bichon Frise whom appears to continuously bark, then there are several approaches to reduce or eliminate the behavior entirely. These are:

Early training and socialization are imperative for all dogs, and with the Bichon Frise, it will help show them proper behaviors and coping mechanisms.

In addition to teaching the dog proper behaviours and coping mechanisms, it will also teach the owners how to react in certain situations.

Bichon Frises have an independent streak in them so they need an owner who will right their wrongs.

It is important to correct the behaviour immediately. Dogs aren’t going to know that you are correcting them for something that happened even thirty seconds ago, so you need to catch them in the act to correct them.

Being firm with your Bichon Frise doesn’t meant to be harsh or yell at them. You just need to stand your ground and have them understand that you are in control and that you don’t appreciate that behaviour.

Dogs are smart, they’ll catch on, you just need to be persistent and consistent.

Instead of punishing your Bichon Frise, use positive reinforcements, such as a nice little treat when they act the way you want.

Verbally praise and encourage them while also giving them a little taste of something yummy.

In this way you are teaching the ‘speak’ and ‘quiet’ commands and the concept is that you can use these commands to control the vocalizations of your dog.

This isn’t something I personally do, I’m afraid to teach my dog to ‘speak’ as I don’t want him to start barking too much. However, this method does work for many so use your discretion. It does take some persistence and time, but the rewards are there if you persevere.

Ensure that you are providing your Bichon Frise with lots of exercise.

These dogs may be small, but they are full of energy and if they don’t have the opportunity to drain that energy then they can take it out in poor and destructive ways.

If you can’t seem to get your Bichon Frise to stop barking with the simple methods described here you may need to move on to something like an ecollar so that you’re able to get your point across more quickly that this is unacceptable behavior.

This is one of the safest, best reviewed dog training collars available on Amazon. This is the one to get if you are considering this approach; which works very well in unison with training.

Note that your Bichon Frise may bark while playing with other dogs and this is perfectly normal and doesn’t need to be corrected.

It’s the excessive barking and barking to get their own way that needs to be addressed.

Bichon Frises tend to bark a lot. Though as a breed, they are supposed to be quiet companion dogs, so it’s a bit of a contradiction.

In other words; if they are barking it’s because of a reason. It could be something in their environment or something that has changed.

Nevertheless, it is important to address, and correct, the issue right away if your Bichon Frise is a barker.

The main reasons for a Bichon Frise to bark are not being the center of attention or being left alone for any length of time.

They can also bark at children and other dogs, especially ones they are unfamiliar with. Being too harsh or too cuddly can also cause excessive barking.

Bichon Frises are a sensitive breed and will take their cues from you, so it’s always best to be calm and positive around the breed.

It is important to train and socialize your Bichon Frise at an early age so that they are taught proper behaviours. Owners also need training when it comes to Bichon Frises.

Owners need to learn how to treat their furry friends as dogs, and not babies, and to also ensure that they take the lead and let the dog know that they are in charge.

Sometimes this is easier said than done. Especially when you’re looking into the cute little face of the white puff ball that just wants all of your love and attention.

Hold your ground and stay firm. Remain positive, however, don’t punish or be harsh with your Bichon Frise when correct their behavior.