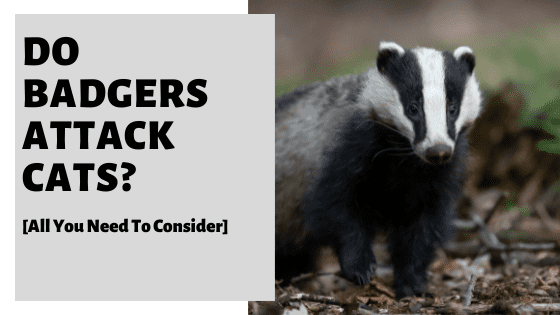 Badgers are known to be opportunistic feeders. They also have a reputation for being highly territorial and aggressive. But would a badger really attack a cat? And if so, how can you be sure that your cat is safe around badger territory? Here is everything you are going to want to know.

So, do badgers attack cats? Badgers very rarely attack cats unless they are considered to be a threat. This is more likely to occur during the breeding season or any time your cat ventures or explores areas around their burrows, as badgers are known to be very protective over their young.

To keep your cats safe, ensure you remove any rubbish from your garden, as badgers are natural scavengers.

You can also keep your cats in at night if you are concerned.

But there is naturally a lot more you can do and other things you will need to be aware of.

So, let us explore how significant a threat these black and white omnivores really are!

Would A Badger Kill A Cat?

Despite the fact that badgers are known to eat pretty much anything, they are very unlikely to attack and kill a cat.

If you have been unlucky enough, you may have witnessed a badger nibbling on a feline carcass by the side of the road.

However, it is more than likely that the animal was already dead before the badger found it.

That doesn’t mean to say that a badger CAN’T harm a cat, so it is always better to be safe than sorry.

American badgers have enormous foreclaws that can reach up to two inches in length.

This makes them incredibly efficient diggers, which is a skill they use to build dens and forage for food. They also double up as lethal weapons!

Although American badgers are not considered to be endangered, their populations are declining due to habitat loss caused by urbanization.

This can cause them to wander into people’s gardens, where they may come across a curious feline!

When A Badger May Attack A Cat

Badgers don’t actively seek out cats, but the occasional confrontation can occur! Here are the main reasons:

Badgers are known to be a bit boisterous as they don’t have many natural predators in the wild.

This means they have no issues stealing food from other species such as foxes, cats, weasels, and small dogs.

So, if food is scarce, an overeager badger may try to nick your kitties’ dinner!

However, these types of conflicts rarely result in a fight, as cats are generally smart enough to know when to back away!

A badger is much more likely to become aggressive to any potential threat (such as a wandering cat) if its den is nearby, especially between July and August when the breeding season is in full swing.

You will also need to be cautious around March/April as this is generally the time when females give birth.

If a female badger feels cornered by a cat, she may attack in order to protect her cubs.

Badgers are very unlikely to attack an adult cat.

Elderly cats are also generally safe around badgers because, for the most part, badgers seem to be fairly uninterested in cats.

However, if a very hungry badger comes across a young stray kitten, it may be mistaken for an easy meal.

For this reason, it is best to keep kittens inside the home until they are old enough to defend themselves.

As with all animals, there is always the possibility of a personality clash between a cat and a badger.

As mentioned above, cats will usually leave a badger alone, but if you have a particularly nosy cat, he could get himself into trouble!

Especially around a nest of cubs.

Ultimately, it is extremely unlikely that a badger will attack a cat unless there is a reason behind it.

Badgers have gained an unfortunate reputation for being vicious animals, but in reality, they will not attack a cat unless they feel threatened.

There are a number of wild predators that may choose to pursue a cat, but badgers are not one of them!

Badgers are opportunistic omnivores. So, if a dead cat is lying on the ground, a badger is unlikely to pass up a free lunch! That being said, a badger is increasingly unlikely to ever attack a cat in the attempt to acquire food.

Naturally, American badgers will generally feed on squirrels, moles, and deer mice, but their varied diets can also include birds, insects, and even rattlesnakes!

Additionally, they may prey on rabbits and hedgehogs. So, if you own one of these as a pet, it is best to keep them inside if you live in badger territory!

Badgers are the ultimate scavengers which makes them well-suited to coexisting with humans.

Trash cans and bin bags contain a wealth of tasty grub for a hungry badger!

Similarly, a cat or kitten that has sadly ended up as roadkill will be very appreciated, but live cats do not appear on the menu.

This could be due to the size, strength, and speed of cats – badgers will always go for an easier option!

Saying that there is one method in which badgers can harm cats, and it may not be what you think!

Badgers can carry a variety of deadly diseases, including rabies and bovine tuberculosis.

The latter is an infectious disease that primarily affects cattle; however, cats can sometimes catch it if they get too close to an infected badger.

Luckily though, the instances are rare.

It is worth mentioning that cats can also contract the disease from wild rodents and by drinking unpasteurized milk, so badgers are not always the culprit!

Rabies is relatively rare in cats, too, particularly now that most states have introduced mandatory vaccinations to prevent the spread of the disease.

Bear in mind that both of these diseases can cause nasty symptoms, so it is always worth taking precautions where possible.

How To Keep Your Cat Safe From Badgers

Cats and badgers usually stay clear of one another. However, if you are worried, there are numerous ways you can keep your cat safe from a potential badger attack. One of the best ways to protect your cat is to keep him inside at night. Badgers are nocturnal, so they do most of their foraging when it is dark. Keeping your cat in at night will also keep him safe from other potential predators as well as cars on the road.

Some people resort to chasing a badger off their property.

This is NOT recommended!

Badgers can run up to 15 miles per hour and are much more agile than they appear!

By chasing a badger, you are becoming the aggressor, which can make some badgers turn around and retaliate.

These animals have incredibly sharp claws that can do a lot of damage to delicate human skin, but their bites are their most efficient weapon.

If a badger turns and bites, it is very unlikely to let go as these animals tend to hold onto their prey like bulldogs.

Furthermore, badgers have very tough, loose skin, which means that even if they are caught, they can easily twist around and either escape or attack back.

Never forget that badgers are scavengers, so the less food you leave outside, the less likely you are to have a badger visitor!

If you have any sort of fruit tree in your garden, make sure you pick up any fallen fruit daily.

Also, you should refrain from leaving pet food out overnight as this is just going to attract more visitors!

Ensure your cat has multiple escape routes in your garden for when/if he needs them.

This can be a cat flap into the home, a hole in the fence, or a sturdy climbing frame.

Many people now opt to keep their cats inside permanently – this is a personal choice and one that you need to think about carefully before making any final decisions.

Most cat breeds can adapt well to indoor life as long as they are provided with regular stimulation, toys, cat posts, and affection.

However, more energetic cats, particularly hybrid breeds, may struggle with being cooped up 24-7.

If you own a particularly athletic cat and still want to keep him safe, consider building a catio in your back garden for him to explore.

Make sure it is sturdy and filled with lots of enticing apparatus!

How To Keep Badgers Away

The continuous encroachment of urban areas on badger territories means that badgers are more likely to enter gardens in search of food. So, as mentioned above, the best (and most humane) way to deter a badger is to make sure there is no food for it to eat!

Additionally, you should ensure your garden fence is secure and embedded deep underground so a badger cannot enter, and always store trash bags securely in an outdoor bin or locker.

If you find that badgers are continually coming into your garden and pulling up your plants, you can also lay wire mesh over your garden as a deterrent.

A badger’s sense of smell is roughly 700 times better than ours.

Try anointing the bottom of your garden fences with citronella oil or ammonia to keep badgers off your property.

If you don’t fancy rubbing your fences with strong scents, try installing motion sensor flood lights in your back garden.

The sudden light will startle a badger, and it is also a great way to protect your home from other potential intruders!

Whatever you decide to do to protect your cat (and your garden!) from badgers, always bear in mind that badgers are not naturally ferocious.

As we have built our homes on their land, we do need to find a way to live in harmony with these creatures that is safe for everyone involved – including our beloved kitties!

Wondering about other animals attacking your cat? My other guides may be for you: