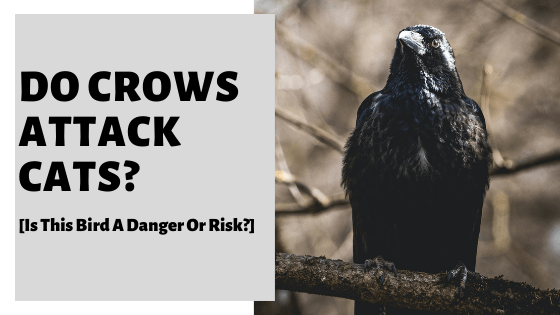 Crows are relatively big birds. They are equally quite aggressive; with both other birds and in some cases, with humans. But what about cats? Will these birds go after them or are they know to attack? I spent some time researching to find out how dangerous these wild birds can be.

So, do crows attack cats? Crows are unlikely to attack adult cats without a reason to do so. However, these birds are territorial and very protective of their young. So, if they believe a cat is a threat to them or their nest, they may attack.

Crows are actually part of a much larger group of birds, classified as Corvidae which include the likes of jackdaws, rooks, magpies and ravens.

These are just some of the other birds you’ll want to be aware of as a cat owner.

They are not certainly an outward threat, but it is important to learn to recognize and acknowledge their whereabouts in relation to your property.

Besides, as much as we love our cute domesticated cats, they are still highly skilled predators and seek out opportunities where and when they can.

Let us now take a closer look at how significant a threat this particular species of bird can be, and how serious, you need to take them!

Will Crows Kill A Cat?

Crows will not outwardly look to kill a cat, although may be able to do so depending on the context. Its unlikely, but it could happen.

Whether or not a crow is capable of doing so will depend on the size of the cat, how well it is able to defend itself, and how many crows are able to attack the cat at any one time.

And this is more common than it may seem.

Smaller birds, such as crows, will join together to fend off larger predators. This is known as mobbing.

As Audubon (the non-profit environmental organization dedicated to conservation of birds and their habitat) note, this learned behavior is all about strength in numbers.

Mobbing includes loud alarm calls, flying at the perceived predator, trying to divert their attention and generally harassing them. Sometimes birds will make physical contact but this is not always observed.

So, if your cat is to get into a ruckus with a crow, chances it it will soon be with many of them. And this is when the danger increases.

Thankfully however, crows will not look to go out of their way to attack.

The main reason why a crow would look to attack is because they naturally spend a lot of their time and energy into rearing their young. Weeks building nests, over 20 days incubating eggs and a further 30 days of feeding their young.

They’re protective, and if a cat gets too close or attempts to go after a baby crow, this is when attacks happen.

One particular part of the year to be extra vigilant is May through to July – as this is the nesting season for crows and many other song birds.

Nevertheless, it is very important that you keep an eye on your cat at all times of the year and what they get up to when outside.

Crows do not generally attack kittens in an attempt to eat them. However, it is not unheard of them to do so. It has happened and it has been reported.

They are omnivorous after all, capable of eating a wide variety of foods including small animals such as mammals, amphibians, reptiles.

So, its also logical to assume that a crow would eat a kitten given the opportunity.

For the most part, crows are typically most concerned with protecting their young.

As such, the chances of a kitten being attacked is more likely if they were to get too close to the nest; even if unintentionally.

This is why as an owner, you do need to be particularly careful of letting your kitten outside.

This is partly why it is not recommended that you do not look to do so before the age of 6 months old.

How Do I Stop Crows Attacking My Cat?

Stopping crows, or any other bird, from attacking your cat is all about preventing cats and crows from coming into contact with one another to begin with.

This is very important and cannot be overstated.

Once a cat gets into a ruckus with even one crow, it becomes very challenging to stop.

It is proposed that they are even smarter than primates.

Part of this intelligence, is their ability to remember dangerous encounters and the specific aggressor behind it.

Crows can even remember the faces of humans whom have previously posed a threat, and then spread this knowledge to other birds!

So; you can now see why it is so important for your cat not to have one of these encounters to begin with. It leaves a lasting impact that can result in future fights.

Thankfully, there are some simple yet effective things you can do to keep your cat a t a distance to crows and other birds.

Here are some of the best ones.

Enter your yard/garden and look for any bushes, trees or areas where crows and/or other birds commonly reside. You can also do this from the window.

Try to identify any nests and how birds come and go – the path in which they take.

Of course, any areas that you notice crows and other birds you are going to want to keep your cat away from!

To stop enticing crows, and other birds, from coming to your property altogether.

At the least, you could look to hang them in areas where your cat does not tend to go or cannot access.

In fact, depending on your property, this may be an ideal approach.

Getting deterrents, like these best selling scarecrow owls from Amazon, are a great way to keep birds and other pests out of your property.

You can move these as and when you need to; but they work particularly well when placed near the nest location.

Crows will perceive this as a predator and it may force them to relocate.

Other options include motion activated lights and sprinklers.

You can use them to create a perimeter around an area for a cat, or make a buffer zone between the two.

Both cats and crows will not want to go through the water of the sprinkler, so they will work both ways.

Another option, is to get your cat a small bell that they can wear around the collar.

While this may not be for everyone, the jingle will alert crows and other birds of their presence long in advance and will mean that they are much less likely to cross paths.

Another option is to construct a more permanent enclosure on your property, that keeps cats within a protected outdoor space that crows and other birds cannot access to begin with.

You can do so yourself with the right materials (such as cat-proof mesh fencing), or you can even purchase pre-made structures.

This outdoor net cat enclosure is one such example from Amazon. While it was designed primarily for decks, patios and balconies, hundreds of owners swear by it.

If you are willing and able to go outside with your cat, then there is always the option of keeping them on a harness as you do so.

Of course, they will not be able to freely explore but you can use this to your advantage.

There are definitely advantages of this, and you can even take your cat for a walk outside of your property with this accessory.

Keeping Your Cat Inside

Another option is to keep your cat indoors, for longer.

You can even help entice them and ensure they do this more permanently by making indoors are much more entertaining and simulating environment for them.

Then you can make it much more comfortable and warm.

A cat is much more likely to want to stay inside than roam the cold outdoors.

Crows do absolutely pose a threat to a cat. Especially a kitten.

At the very least, they certainly need to be considered and accounted for.

Cats are natural predators, and crows are willing and able to defend their young.

It comes as no surprise to learn that things can get ugly, when you take these considerations into account.

How you decide to do this is ultimately up to you, and thankfully there are many options.

But ensuring your cat/kitten does not get into a ruckus with a crow to begin with appears to be of most importance.

Mobbing and social learning make these birds quite dangerous.

So prevention is without doubt better than cure; keeping cats and crows at a distance should keep both safe.

Can crows pick up a cat? Crows are likely able to pick up a small cat, and even carry them off elsewhere. While this is unlikely, it has been known for crows to be able to carry small puppies, such as chihuahuas, to other locations.

Can a cat catch a crow? Cats are more than capable of catching crows, and will more than likely attempt to do so if given the opportunity. While crows are not small birds, cats are generally not overwhelmed by their size – even attempting to go other larger birds such as seagulls.