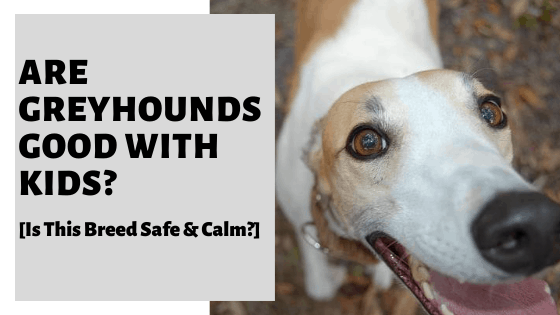 Greyhounds have a reputation for being racing dogs that can reach top speeds between 40 and 45 miles per hour. They were initially bred as sight-hounds and as hunting dogs to chase rabbits, foxes, and even deer. However, they are now commonly kept as household pets. But how do they act, respond and behave around children? Is this a suitable breed for families with kids and are there any considerations that need to be addressed? Here is what you should know.

So, are Greyhounds good with kids? Greyhounds are good with kids so long as they are well trained and socialized. They are generally affectionate and gentle in temperament. However, they are not very tolerant with smaller children or ones who act out around them. In addition, due to their large size, they can unintentionally hurt small children by knocking them down in their eagerness to play and expend some energy.

Overall, Greyhounds are friendly with a wonderful temperament.

They are a sensitive breed and will shy away if they are mistreated or around a lot of chaos, even if it is not intended towards them.

If there is tension or a lot of yelling going on in the household, you may find your Greyhound becoming overly timid.

There are many Greyhound owners whom report having kids and it working well within the household.

Of course, any dog can theoretically be a danger to a child, so it’s an important topic and these are important questions nonetheless.

Let us now take a closer look at the Greyhound breed and how they act and respond in the presence of children.

We will also look at how to teach your kids how to respond around them and other important considerations to keep everyone safe, happy and healthy.

So be sure to keep on reading until the end.

Greyhounds make great family pets and get along with everyone in the household, including other dogs. Though the breed is kid friendly, they do better with older children than with younger ones.

If you do have young children in the house, you don’t need to fear.

Greyhounds are not the type to snap at young kids, they are more apt to get up and walk away, most likely into another room, if they are unhappy with a situation.

Teaching children how to behave with dogs will go a long way in helping the relationship between your Greyhound and children.

Training should be given to your dog and children about proper behavior. Of course, the training they receive will be completely different.

Children will just need an initial introduction to proper behavior with dogs, and more specifically, Greyhounds.

There’s a good chance you will need to provide them with reminders from time to time.  But if they know how to behave for the most part, then your children will be able to bond with your Greyhound.

Kids are playful and can be overly loud and rough, without even realizing it, so they need to be taught that they can’t act this way around the Greyhound.

With the proper behaviour, your Greyhound will love your children and will want to play and cuddle with them.

It’s important to teach children about all dogs and not just the one in your house. They need to know that not all dogs act the same, and just because their dog loves them, others might be scared, wary, or aggressive to them.

Some particular things you’ll want to mention are:

Kids are bound to forget, or make mistakes, but don’t get angry and yell at them, just calmly go back over the rules and explain to them why they are important.

Training for Greyhounds and Owners

Greyhounds, like all dog breeds, should receive training and socialization from an early age.

Greyhounds are intelligent and can be stubborn, especially when it comes to training, so prepare to be patient and remind them when they do unwanted behaviour.

While Greyhounds need to be trained, so do owners, and oftentimes the two go hand in hand. Dogs need to be taught acceptable and unacceptable behaviour but it’s the owner that needs to teach, and enforce, what is and isn’t correct.

Like some other intelligent breeds, Greyhounds don’t always like to be trained, or told what to do.

They may try to take control of the situation so they will need an owner who will stand their ground, in a positive way and to ensure that the Greyhound knows right from wrong.

Since they are a sensitive breed, positive reinforcement will go further in your training sessions than negative energy and frustration will.

The sooner you are able to get your Greyhound into a training program, and are able to socialize them, the better your dog will be.

Dogs learn things from other dogs that we, as humans, can’t teach them. That doesn’t mean that that humans can’t teach Greyhounds a thing or two as well.

Can Greyhounds Be Vicious?

Greyhounds are not a vicious breed of dog. They are not a breed that will growl, snarl, snap at, or bite someone.

When they are not happy or are afraid, they will run away and sulk by themselves instead of acting out.

Greyhounds are sensitive dogs, to the point where owners need to keep an eye on them. The breed will avoid confrontation and uncomfortable situations, not act out in an aggressive manner.

Contrary to popular belief, retired racing Greyhounds are not vicious nor aggressive. Though, some experts recommend muzzling retired Greyhounds until they settle in with their new family, in case their prey drive becomes too strong.

Racing of Greyhounds began in the United States in 1919 however, nowadays it has been banned in most states and been considered inhumane.

Different countries have different rules when it comes to competitions and treatments of the Greyhounds.

Greyhounds are very docile, especially indoors where they are full of low energy, and even do well in apartments.

Outdoors is a different story and they almost come alive and need to run, even those who were not used as race dogs.

The breed should never be let off leash when not in an enclosed space as their prey drive is strong and they will run after and chase any small animal, such as a squirrel or rabbit.

Things to Consider When Owning a Greyhound and Having Kids

The biggest thing to consider when owning a Greyhound and having kids is to never leave them unattended together.

While Greyhounds are not vicious dogs, they are rather large dogs, reaching a top weight of around 65 pounds, and can easily knock down a small child.

This rule doesn’t just apply to children and Greyhounds, but to dogs of all breeds. Greyhounds have a lot of energy and will easily join in with the children’s’ play, which could inadvertently end up with one of them getting hurt.

Greyhounds need some space to run and get rid of their energy, but will easily curl up anywhere, and with anyone in the house and just relax and sleep. You may very well find your Greyhound and child curled up together on a regular basis.

When looking for a Greyhound, if getting a puppy, it would be nice if you could meet the parents and find out how their temperament is. Ask the owners how they get along with children.

If you get an older, or adult dog, you may want to test them around children before bringing the Greyhound home. Depending on the dog’s reaction you may decide that the household wouldn’t be a good fit.

Welcoming A Greyhound To The Family

Greyhounds naturally make great family dogs. But how would you go about integrating them into your home with young kids?

Although biting is not a common occurrence in this breed, just like in any dog, it is still possible.

So, what should kids know to not frighten, intimidate or scare a Greyhound:

Overall, Greyhounds are very patient, docile and caring. You should not have any problems or events that could lead to your kids getting hurt from a Greyhound.

However, it is important to be proactive with your children. Teaching them how to treat the dog goes a long way to ensuring safety for everyone.

Greyhounds are friendly, intelligent dogs, who are typically very docile and gentle. The breed makes a great family companion as they get along with everyone in the household, including children and other dogs.

Older children in the household are better for Greyhounds then younger ones. This isn’t for fear for the children; Greyhounds won’t act out towards the children, just run away.

Greyhounds are sensitive and don’t like there to be a lot of noise or chaos. If they are unhappy, they have a tendency to walk away, into another room where they will curl up and sulk.

While many rumours persist about the temperament of retired racing Greyhounds, most of them have been unfounded.

Muzzles are used at times until the retired dog has settled in with its new family out of concerns that their prey drive will kick in.

However, in reality their docile nature should leave you with not worries, although you should never leave Greyhounds, or any dog breed, alone with children, especially infants and toddlers.

So, if you have small children and are thinking about getting a Greyhound, you have nothing to worry about, especially if you teach your children how to properly act and play with the dog.

The Greyhound will easily settle into the family and it will soon feel like you’ve had them forever.

Greyhounds are not an aggressive breed of dog. Instead, they are more prone to isolating themselves and removing themselves from any uncomfortable situation.

They generally do not snarl, growl, or pull their ears back; all displays of aggressive behaviors seen in other breeds. Learn more.

Greyhounds are generally affectionate and love to cuddle up with their owners, so long as they are given attention, care, and sufficient exercise.

Greyhounds have a reputation for getting quite attached to their owners, and often do all they can to get your attention.

However, all dogs have their own personalities and preferences. Some Greyhounds may therefore not be open to cuddling and can be more reserved in nature. This is increasingly likely in older Greyhounds adopted later in life.