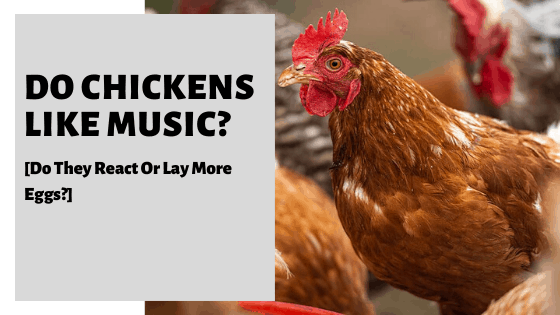 If you own a flock of chickens, you may have considered putting some music on for them. Is this a good idea; do chickens like music and are there any particular genres that are best or should be avoided? With these questions in mind I decided to delve into the research. I would like to share what I managed to find with you here today.

So, do chickens like music? Chickens do like music as long as it’s not too loud, or the beat is too fast. Chickens respond to music, especially if they are kept in coops or runs. Free-range chickens may or may not show an interest in music. Evidence from studies and research suggests that certain classical music songs help improve egg production and increase chick growth rate.

Studies show that music affects the mental health of listeners.

Both in humans and with animals. Yes, animals respond to music too.

Listening to music has both a positive and negative impact on its listeners.

If upbeat music with an excellent beat is played, it has been proven to improve well-being and morale.

Equally, heavy music can excite or even cause stress.

Chickens are not immune to these effects. This is why you need to ensure you are only playing appropriate music if you decide to do so.

Understand your chickens’ behavior and needs and learn a whole host of other essential chicken-keeping best practices.

This comprehensive eBook covers it all.

To discover the types of music to play, and why you would want to do so, be sure to read on!

While each bird is their own individual with unique preferences, it appears that many chickens like listening to music.

Research conducted on day-old chickens revealed that they prefer music to random sounds.

Laying hens who are exposed to music lay comparatively more eggs than their non-music listening counterparts.

It appears that chickens kept in coops appreciate listening to music more than free-range chickens.

Free-range chickens can wander off and don’t really have to sit and listen to music, never the less, many chickens like music.

You can boost the happiness of your hens by exposing them to pleasant music; chickens enjoy soothing music as much as we humans do.

Chickens are surprisingly intelligent and sensitive, so it should be of little surprise to people that they too can enjoy it when it is put on.

Of course, there are certain types that are preferable. Let’s look at the best ones in the following section.

Ready to learn how to keep and care for a flock with confidence?

Our instantly downloadable eBook will show you how.

Get it now while it’s still on sale ⬇️

It appears that chickens like listening to classical music most.

Humans enjoy harmonics, and consonant noted sound as if they were a single tone, while you can distinguish multiple tones from a dissonant note – this is related to harmonics.

Sounds are linked with preferences for harmonic relations between frequencies. Dissonant sounds are not related to harmonics.

As early as one day after birth, it seems that human babies’ brains can tell the difference between consonant and dissonant music.

The question still remains whether the preference for consonant sounds is innate to the properties of the auditory system or if the preference is down to culture or personal experience.

A study was carried out by the University of Trento in Italy, to see whether the preference for consonant music was something inherent or linked to culture and personal experience.

It appeared that the best way to test this was to do it using a controlled rearing study, whereby animals are reared from birth in a tightly controlled environment; since this cannot be done with human infants.

Chickens were used for this experiment as they don’t require parental care. Researchers took fertilized eggs from a neighborhood hatchery and kept them incubated in a soundproof room.

Each egg was put in its own coop on the last day of incubation so that the chicks couldn’t hear one another chirps after hatching.

In each coop was a red object suspended from a string, and each chick would imprint.

Each chick was moved into the middle of the testing coop. At the end of the coop were two speakers.

Beside each speaker was an object identical to the one the chicks were imprinted. After listening to the melodies for more than 30 seconds, each chick had six minutes to approach one of the two sides of the coop, as the music continued to play.

The researches deliberated that since the objects were found on either side of the testing coop, the chicks would be equally motivated to approach either the right side or the left side.

The chicks approached the side of the coop, playing consonant sounds more than the one playing the dissonant sounds.

Do Chickens React To Music?

Yes chickens react to music in different ways, depending on whether they like the music or not. They might even be indifferent to music, some do not react at all.

When chickens like or dislike something, they make their feeling known. Let’s discuss some of the ways chickens react to music, both positive and negative reactions:

If you play harmonious music, through a CD or if you go out with an acoustic guitar, your birds might lower their clucking, and slow down their movements and approach the source of music to sniff it.

This is an excellent response; it shows that they like the music and are curious about it. If you get this positive reaction, you should consider playing music that they like more often as it will keep them happy, relaxed, and productive.

If you are playing music and the volume is just right, and you are getting no reaction, this music is doing nothing for your birds positively or negatively, keep trying until you find a song that they like.

If you see this type of reaction, it’s time to turn off the music; perhaps the volume is too loud. Chickens, like most animals, don’t like hard rock or metal, even some pop music can be overbearing.

Studies have confirmed that chickens can lay more eggs when listening to music. A study at Bristol university placed chickens in both silent nest-boxes and ‘musical boxes.’

In fact, just a few years ago, The Happy Egg Company released an album, the first-ever for the listening pleasure of hens, to help them feel more relaxed when they lay their eggs.

Amusingly, its called Top of the Flocks. You can listen to it here for free on Soundcloud.

Your birds can enjoy tracks from Beethoven and Mozart; it turns out that when hens listen to classical music, they increase egg-laying by 6%.

The study conducted with the University of Bristol revealed that hens are sensitive to loud noises, particularly 80 decibels or more. Loud music can have a severely negative impact on their well-being. The soothing tempo of classical music is the way to go with these birds.

If your birds are not laying eggs or laying very few, You could try an experiment with your birds. In the first week, don’t expose your hens to any music, take stock of the eggs produced at the end of the week.

In the second week, expose your hens to classical music, you should see comparatively more eggs in that week, some hen keepers report of having larger eggs than usual.

Some people have found that pop music has little to no effect on the egg production of hens and that rock music decreases the production of eggs and reduces the size of the eggs.

So the evidence shows that classical music helps to improve bird productivity, not only musical therapy increase egg production, it can help to increase the chick’s growth rate as well.

Some people have tried music with varying success; however, the music is too changeable, and there are too many words that only distract the birds.

Music is enjoyed universally by both humans and animals, chickens included. The positive impact of music is very apparent in chickens, Especially exposure to classical music.

The positive effect is shown by the increase in the production of eggs. Chickens are sentient beings and are sensitive to sounds and notes, just like humans and other animals.

Classical music clearly has a very soothing and therapeutic effect on chickens; it’s essential that any music you play for your birds is below 80 decibels.

Some chickens can fall asleep to music; it appears that music can soothe chickens to sleep. If you want improved egg-laying and sleeping patterns, gentle music helps a lot.

Music is beneficial for the overall health and well-being of your poultry birds. It’s incredible how even day-old birds show a preference for music as opposed to random sounds.

Strangely, a bird that can’t sing should have any interest in music, but it appears that they can tell the difference between consonant music and dissonant music.

If you have kept your chickens long enough, it’s easy to discern happy clucking sounds from unhappy ones, so they do make noises to communicate with each other.

They react to noises in their natural surroundings, so it is reasonable to conclude that suitable background music would mellow chickens out.

Have fun with your flock, trying out different types of music, and seeing the different reactions from them.

Are you wondering what else chickens may or may not like? Then my following guides may be of interest: