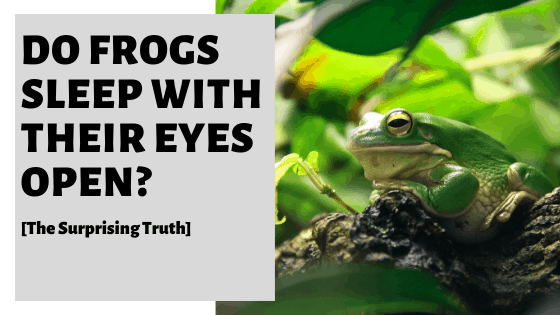 The sleeping habits of frogs may be of interest to you. Perhaps you have a local population nearby, a keen interest, or even keep them as pets. A common question asked is whether these amphibians sleep with their eyes open? The answer may come as a surprise…

So, do frogs sleep with their eyes open? Frogs are known to ‘sleep’ with their eyes closed. However, current research suggests that frogs and other amphibians do not sleep in the traditional sense. While they do go into an extended immobile resting state, they are still very alert and responsive to stimuli.

So whilst frogs can be considered to sleep with their eyes closed, in many ways, they are still very much awake.

Instead, they are merely resting.

Let us now take a closer look at exactly how frogs rest.

The Eyes Of Frogs

Frogs have vastly different eyes and visual capabilities than us humans. While they are known to close their eyes at times, their structure and need to do so are quite unique.

It is this third eyelid that has enabled frogs to survive on land and in water.

But it also serves another purpose; lubricating the eye and providing increased protection. Doing so via ‘blinking‘.

It is believed that this third eyelid enables frogs to keep their eyes open for much longer.

And this has major advantages.

To enable them to be much more alert, especially during hibernation, and to give them an almost constant field of vision to seek out food.

In fact, frogs even use their eyes to swallow food!

And being on the top of their head, a frog can see almost 360 degrees around them.

And then one other important consideration here is that frogs have evolved a layer of tissue called the tapetum lucidum; this specifically allows them to see at night and in dark conditions.

So as we can see, frogs like to keep their eyes open. In many ways, they need to!

Whether frogs need sleep is a subject of much scientific debate. But it depends primarily on how you define the word sleep.

Here is a commonly accepted definition of sleep by Miriam Webster:

“The natural, easily reversible periodic state of many living things that is marked by the absence of wakefulness and by the loss of consciousness of one’s surroundings, is accompanied by a typical body posture (such as lying down with the eyes closed), the occurrence of dreaming, and changes in brain activity and physiological functioning is made up of cycles of non-REM sleep and REM sleep, and is usually considered essential to the restoration and recovery of vital bodily and mental functions.”

There’s a lot to untangle here.

But the running theme that runs throughout this definition is that sleep is defined by a complete transition into dormancy.

It’s a state of complete vulnerability.

During sleep, one is not mindful or aware of the outside world.

But in frogs, existing research suggests that they never enter this stage nor level of rest.

With all the above in mind, it’s fair to say that we do not know whether or not frogs truly sleep.

Or sleep in the true sense of the word.

They are nocturnal (awake during the night) after all, blurring the lines further.

What we can logically assume, though, is that frogs have evolved over the course of millions of years.

Whatever they need, in regards to ‘sleep and rest, is surely being met.
Nor would that not have survived to this point.

How Do Frogs Sleep?

Frogs enter a period of rest by closing their eyes and sinking them down into their mouths.

At the same time, they will close their eyelids to better conceal and protect themselves while they are more vulnerable.

The upper of the three eyelids sit stationary, whereas the upper and third eyelids (the nictitating membrane) will work in sync occasionally to keep the eyes moist.

During this period of rest, a frog will remain active and alert.

Despite being immobile for long periods of time, they can quickly and instantaneously respond to external stimuli, whether this is food or the threat of a predator.

Nevertheless, frogs do tend to tuck their feet under their body and lay down with their chins and stomachs resting on the floor.

When Do Frogs Sleep?

The majority of frog species are nocturnal and active at night, so any period of rest of inactivity is going to occur during daylight hours.

Nevertheless, even during the night, a frog will spend the majority of the time remaining still.

This is, of course, a hunting tactic, which they use as a means to catch their prey.

Then they will strike with their tongues before proceeding to swallow hole upon a successful catch.

During the daytime, a frog will predominantly keep themselves concealed in safe and preferable places. Moist areas are sought out, such as under a fallen tree, underground, or even under rocks.

Each year, frogs will also enter a period of hibernation.

This is an extended period of rest, brought about by a change in the environment and conditions.

When and where depends on the location and the frog species, although it is done so as a means of preserving energy when food is more scarce.

Hibernation is a more dormant state with less movement. But again, frogs remain relatively alert during this time.

How Can You Tell If A Frog Is Sleeping

You can tell a frog is sleeping by its position and by its eyes. Frogs will first attempt to find a concealed place to hide, with good cover. If perceived safe, they will then proceed to lying down and shutting their eyes.

If you were to observe closely, you would also notice that their eyes have sunken down somewhat into their sockets. The nictitating membrane will be covering their eyes too.

A ‘sleeping’ (resting) frog will be a lot more stationary than at other times.

Frogs will instinctively enter this resting phase when they feel safe enough to do so.

Shining a dim light on a resting frog should cause a slight twitch on the upper body/throat.

Breathing should be visible too, and you should notice that this is slowed somewhat during periods of rest compared to periods of awareness and from movement.

Frogs do not sleep with their eyes open. But then again, these amphibians do not truly sleep.

Well, at least in with our current level of understanding of these amphibians and our interpretation of the word.

Frogs do rest and typically do so during the day and in safe areas.

But they are still active, at least from a psychological perspective.

Besides, who knows if a predator was to strike or prey were to walk on by.