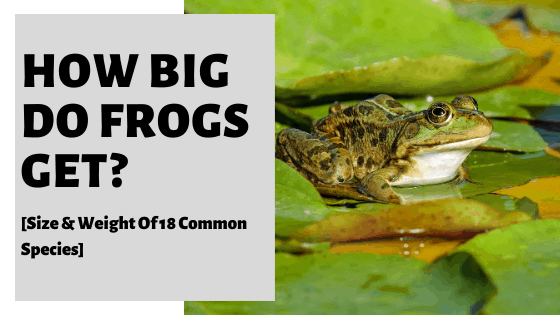 Starting out as frogspawn, transitioning into a froglet and then again onto a frog. No wonder why it is so hard to envision how big a frog will get. And then there are the thousands of different species. But what kind of size does the average frog get; what is the range? Let’s find out?

So, how big do frogs get? Frogs can be anywhere from <1-32 cm in length (from snout to vent) and weigh anywhere between 0.5g-3/2 kg. It depends entirely on the species. Although, the average size for all frog species is around 6-12 cm in length and 10-75 grams in weight.

As you can see, it’s almost impossible to get an exact figure for either length or weight.

Because there are 4,810 known species of frog, and chances are, there is more out there.

And frogs (which can be found on all continents and geographical locations) vary.

That’s the truth of it.

Some frogs are very small. And some. Well, it’s fair to say they are large.

Not just in relation to other frogs but to other amphibians and animals in general.

So, let us now take a closer look at the factors that influence the size of a frog before moving onto the average size of 18 of the most common species!

We’ll also be looking at growth rates, so be sure to keep on reading, especially if you intend to get one as a pet!

Frogs can vary dramatically in terms of size and weight, and there are generally three different reasons for this: species, sex, and diet.

Let us now explore each one.

The size potential of a frog is largely determined by genetics. More specifically, the species.

It is within each species that you get a typical pattern developing in results to their size.

And frogs within a species will not gravitate much outside of this range.

Sure, you will get differences and some outliers here and there.

But for the most part, a frog of one particular species will grow to a specific, almost anticipated size.

The sex of a frog has a lot to do with its final size.

And for frogs, it’s not as simple to say that males are bigger than females, or vice versa.

This is not always the case.

In some species, males are larger.

In other species, females are larger.

Take the African Bullfrog, for instance; males can reach almost double the size of the females.

The diet of a frog largely determines the size a frog can become within reason.

It’s only logical that a frog with access to more food and more energy will grow bigger and heavier.

And due to the way frogs consume their foods, whole, it’s a bit of a cycle here.

Larger species of frogs can eat bigger prey, even as large mice, which in turn leads to them putting on more weight.

And frogs can put on excess weight too if they eat too much for their given need.

That’s right, obesity in amphibians is a thing.

Below we will take a look at the average size and weight of 18 of the most common frog species.

Some of these are kept as pets, whereas others are the more notable wild species.

Be sure to remember that these numbers are averages and frogs can always fall outside of this range.

I have ordered the data in terms of smallest to the largest:

As you can see, there is quite a variety in size!

Equally, just because may be larger in terms of their length, does not necessarily mean they will carry more weight.

The truth is, frogs come in a range of different body types.

Some are quite stocky, whereas others are more nimble and lean.

How Long Do Frogs Take To Grow To Full Size?

How long a frog takes to grow to its full size will depend on the species. Smaller frogs generally reach their full adult maturity much quicker than larger species; there is less to grow!

Each species of frog will go through its own cycle of development.

This is known as ‘metamorphosis.’ Or, in other words, the progression from one life stage to the next.

Quite a few stages to go through.

And for a smaller frog, such as the common frog, they can reach their full size in as little as 12-14 weeks.

But for larger frogs, it can take as long as 6-12 months for them to reach their final size.

And frogs may continue to fill out even longer than this!

Almost every frog species will do their growing early on in life, but there are reported cases of frogs continuing to add weight and mass as they continue to age.

Pixie frogs are a prime example, for instance.

Of course, this has a lot to do with the diet too.

An underfed frog will not develop the same amount of mass as an overfed frog of the same species.

What Is The Smallest Frog In The World?

The smallest known and currently discovered frog in the world measures 7 millimeters in length. This is less than a fingernail. The frog species, the scientific name Paedophryne amauensis, was discovered in Papua New Guinea by a US-based research team in 2012.

More recently, another species of tiny frog was discovered in Madagascar. Adequately named Mini mum, this measured 7.7 millimeters in length.

Of course, these are only the frogs discovered.

Who knows if there are any smaller frogs currently in existence smaller than this.

And these are just those recorded!

What Is The Largest Species Of Frog?

The largest species of frog is the Goliath frog. Appropriately named, this species grows up to 12.5 inches (32 centimeters) in length and can weigh up to 7.2 pounds (3.3 kilograms) when fully grown.

Stated differently, the size of this frog compares in the following way:

Frogs come in all shapes and sizes.

So much so that some frogs dwarf in comparison to others.

Quite literally in the case of an African Dwarf Frog and a Mimic Poison frog!

And then there are the African Bullfrogs and Goliath.

These really do deserve their own categories.

And when you see pictures of them, you will see why.

With all this in mind, it’s essential you consider the size of each species at their full-grown size.

Particularly if you plan, or want to take any one of them on, as a pet.

Besides, the size of a frog will have big implications for their care and needs.

Their tank is a prime example.

So even if all frogs start out as tadpoles of a similar size, where they end up, is… ultimately entirely varied!

How Big Do Pacman Frogs Get?

Pacman frogs typically reach between 10-17 cm in length (snout to vent) and 225-500 grams at full adult size. They are considered medium-sized.

How Big Do African Dwarf Frogs Get?

African Dwarf frogs typically reach between 5-6.5 cm in length (snout to vent) and 2-5 grams at full adult size. They are considered small-sized.

How Big Do Bullfrogs Get?

How Big Do Treefrogs Get?

Treefrogs frogs typically reach between 3-5 cm in length (snout to vent) and 7-10 grams at full adult size. They are considered small-sized.