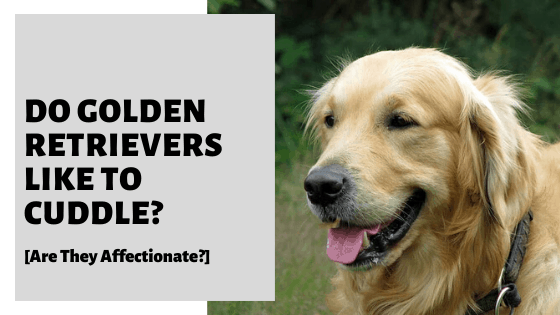 Golden Retrievers have a reputation for being friendly and loving dogs. They are family friendly and there are many other reasons that make these amazing dogs such a popular breed.  Golden retrievers are easy to train and they love nothing more than to please their owners. They love attention and affection; so its natural to wonder whether or not your retriever likes cuddles?

So, do golden retrievers like to cuddle? Golden retrievers generally cuddle, being affectionate and loving in temperament. Cuddling is one such way they can show a liking to their owners. However, not all Golden Retrievers will be as keen to cuddle as others, and specific contexts, like warm weather, can result in a lower desire to cuddle.

There are many different reasons why your Golden Retriever might enjoy cuddling, snuggling and spending time with you.

Any retriever owner will tell you: they are an amazing and highly rewarding breed of dog to welcome into your family. Not only because they like cuddling, but because Retrievers typically are even tempered, friendly and incredibly loving dogs.

Why Are Golden Retrievers So Cuddly?

Golden Retrievers are known for being super friendly and loving. They are a great breed of dog and are considered ‘family-friendly’ because of their incredibly even temperament.

Golden Retrievers are known to be intelligent, devoted to their owners and friendly. It is no secret that most Retrievers love nothing more than a good old cuddle and snuggle with their owners from time to time.

There are several reasons that Golden Retrievers are such cuddly pets.

Anecdotal evidence from many different owners suggests that some Golden Retrievers would consider themselves lap dogs and will happily clamber onto their owners lap for a cuddle, seemingly unaware of their size!

Did you know that cuddling releases the same ‘feel good’ chemicals for dogs as it does for humans?

Your Golden Retriever might be so cuddly because, cuddling with you makes them feel good! The love and trust you build with your pet, including the affection shared between you in a cuddle, releases a chemical called oxytocin in your Golden Retrievers brain.

This 2017 study concluded that through testing 60 Golden Retrievers, dogs have evolved unique human analogue social skills that not only enables them to communicate and cooperate efficiently with people, but suggests they have developed contact seeking behavior.

Often referred to as the love hormone, other scientific research suggests that even just five minutes of petting and cuddling with you dog can increase the levels of oxytocin in their bodies.

This is associated with forming a bond with your pet and gaining their trust and affection.

Golden Retrievers are widely known to be an incredibly friendly and sociable breed of dog, hence why cuddling might be quite high on their doggy agenda!

When your retriever cuddles with you, they are developing and strengthening their bond with you and in doing so, demonstrating their love and devotion.

Like all dogs, Golden Retrievers have their own distinct personalities and it is incredibly rewarding getting to know your pet’s characteristics, traits and quirks.

Whilst most Retrievers will seek out physical contact (like cuddles) with their owners, that isn’t to say that all Golden Retrievers will. Don’t be deterred if your Retriever shies away from cuddles, there are plenty of reasons why this might be.

It could be too hot, they might be hungry or they simply may not enjoy cuddles in the same way you do which is not a problem at all. There are plenty of other ways that your Golden Retriever might show you affection.

Golden Retrievers often appear to be smiling and are typically very happy and content dogs when cared for properly. Retrievers tend to bond quickly with their owners owing to the friendly and affectionate nature.

Playful yet gentle: two characteristics that will undoubtedly contribute to Golden Retrievers popularity as a pet, particularly in homes where there are children. It is no surprise that one way a Golden Retriever shows their affection is playing with their owners.

When out on walks, you may find that your Retriever often doubles back on themselves simply to check that you are still there and are okay.

Retrievers are incredibly devoted to their families and this is a key sign of their affection.

Lots of Retriever owners will describe in detail just how unaware of their own size golden retrievers can be, especially when it comes to sharing affection with their owner.

Despite being on the larger side, don’t be surprised if your retriever considers themselves small enough to fling their entire weight into your arms or onto your lap as a way of showing affection!

Do Golden Retrievers Have A Favorite Person?

It is natural for owners to be curious as to whether or not their Golden Retriever has a favorite person owing to their incredibly friendly and affectionate nature.

Your Golden Retriever will likely behave as affectionately and playfully towards someone that they have just met as they do towards you. But be reassured, Retrievers are exceptionally devoted to their owners.

Their loving and playful nature is probably one of the main things that make Golden Retrievers such an attractive breed of dog to welcome into your home.

Their loyalty, affection and utter devotion is what will quickly make them part of your family.

Building a bond with your Retriever is likely to happen quickly, but last a lifetime. Retrievers are a very sociable breed of dog, they are friendly and likely to develop strong bonds with each member of the family who invests time in doing so.

A bond with your dog is no one-sided affair.

Quite the opposite in fact.

So, whilst Golden Retrievers may not have a ‘favorite-person’ if each member of your family shares their care equally amongst them.

It is highly likely that if you are the person who spends the most time with your Retriever and does the most for them, that they will favor you.

One of the most wonderful things about Golden Retrievers, is that the devotion and love you put into their care is mirrored back to you in the affection and loyalty they will show.

Why Do Golden Retrievers Put Their Paw On You?

Have you ever noticed the way your Golden Retriever looks at you when they put their paw on you?

Eyes filled with love and head tilted to one side? This is because when a Golden Retriever puts their paw on you, it means that they want to interact with you and it is a sign of their affection.

When you are sat watching TV or working, it is likely your Golden Retriever will put their paw on you in an attempt to draw your attention away from whatever it is you are trying to do, and instead move it to them!

If your Golden Retriever puts their paw on you to get your attention – what a polite pup you have!

When a Golden Retriever wants to interact with you or desires your attention, it is also common for them to jump on you – that way you have got to play – right?!

Your Golden Retriever may be trying to get your attention by putting their paw on you because they are hungry or want something to eat. If it is near a mealtime, this may be the case.

Retrievers are known for their love of food and big appetite – if your Retriever is begging for food, they can be trained out of this and taught to follow commands.

If your Golden Retriever has been a little naughty or told off for something, they could be putting their paw on you to ask for forgiveness – adorable right?

Golden Retrievers are highly intelligent and can pick up on human emotions.

Forgive your Golden Retriever if they touch you with their paw to say sorry, because this is your dog’s way of acknowledging their mistake.

Golden Retrievers are friendly, loyal, intelligent, playful, gentle and devoted pet dogs. They often enjoy cuddling as much as their owner does.

The oxytocin released into your dog’s body when sharing cuddles and affection with you will make them feel good and help to develop a strong bond between you and your pet.

Golden Retrievers are affectionate and cuddly, however, you should always consider their body language as you can learn a lot about their affection preferences when doing so.

Like humans, dogs have their own unique personalities, and golden retrievers are no exception.

Some Golden Retrievers may enjoy cuddles and affection more than others, but let’s not forget, Retrievers are sociable dogs by nature, and human interaction between dog and owner is key to their health and happiness.

Why are Golden Retrievers so friendly? Golden retrievers are generally a very friendly dog breed. They have a range of characteristics that make them a great dog to own and a companion including: a desire to please others, being attentive, being sociable, loving to play and being very loyal. This is due to their ancestry, how they have been kept for generations and some science is starting to suggest there is a genetic component too. However, just like with any breed of dog there are exceptions to the rule – there are some Golden Retrievers that are not particularly friendly or particularly trainable.

Do golden retrievers have separation anxiety? Yes, golden retrievers are known to suffer with separation anxiety as much as, or more so than other breeds. This is because they are a very sociable dog, whom are known to form close bonds with their owners. Barking, crying, howling, chewing, salvation and panting are behaviors in which a Golden Retriever may display if their owner is spending too much time away and they become lonely and depressed.