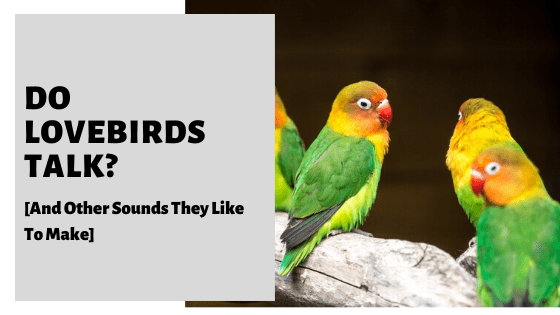 Lovebirds, for good reason, are one of the most popular species of pet parrot. Beautiful and intelligent these charming creatures make for excellent and engaging pets to own. If you own a Lovebird, or are interested in learning more about this species, naturally you may have some questions about their behaviors, including whether or not Lovebirds can talk.

So, do lovebirds talk? Lovebirds do not typically talk, however they are known to be able to mimic human speech from time to time. Lovebirds are known to imitate and repeat simple sounds that they hear often, for example whistling sounds or a doorbell. It depends on the personality of the lovebird as to how much or how often they speak or mimic speech; the amount differs between birds. A lovebird, however, is known to be more vocal if introduced to speech and replicable sounds from a young age.

There are many different types of lovebird within the species and they are so named because of the loving manner in which they behave toward one another: sitting and preening together. Their charming nature is what makes lovebirds an attractive pet for some people.

Their feisty and smart nature endears them to many and makes owning one highly entertaining! Lovebirds’ call is generally a high-pitched shriek, however don’t let that put you off: compared to other species of parrot lovebirds might even be considered quiet!

Lovebirds usually shriek or mimic sounds during dawn and dusk hours, however this can differ from bird to bird. Lovebirds tend to squawk, chirp and chatter rather than warble and whistle and only rarely mimic noises or talk. However, there are some lovebirds who do both!

Lovebirds are social little creatures and can live up to 20 years. Lovebirds are bold, curious and energetic pets and spend their days chattering and exploring their surroundings.

This vocalisation often leads people to question whether lovebirds can talk or not. The answer is yes, they can talk – but the way in which they do may surprise you! Communication between lovebirds is common, meaning that they talk to one another a lot but may not always talk to people.

If you own more than one lovebird, it is likely that their chatter will be louder and much more frequent, as chatter between lovebirds is a social interaction. They require lots of interaction, particularly if you have a lone lovebird and will need human company and toys to provide entertainment and ensure they do not become lonely.

Lovebirds are a species of parrot, meaning that they do have the ability to talk and mimic human speech, however it is not common for them to do so. Anecdotes from owners tend to suggest that their lovebirds will occasionally mimic or repeat phrases that they hear regularly.

The clarity of a lovebird’s speech does appear to be inconsistent, however it is possible to train your bird to speak. If a lovebird is exposed to simple words and phrases from a young age, the likelihood is that they will pick up on this and begin to mimic those simple words.

Lovebirds tend to mimic and copy human speech rather than talking themselves. That being said, not all lovebirds will have the desire to talk, some may never mimic speech.

What Does Talking In Lovebirds Mean?

Their social and feisty nature coupled with a high intelligence means that lovebirds generally seek stimulation and entertainment throughout the day.

With most types of parrot, talking and vocalization is how lovebirds will express their feelings and emotions. Shreiking, chattering, chirping, squawking, whistling and talking are signs that your lovebird is happy and contented.

In the wild, lovebirds will often call out to each other early in the morning and just prior to dusk. Lovebirds are flock animals and this is how they communicate so you may find your pets do the same.

If you have both female and male lovebirds, their calls and chattering may in in an attempt to find a mate. Lovebirds are called lovebirds for a reason; the bonds that they form with one another are deep and meaningful. Their chatter may be induced by the affection they feel towards one another.

One thing to be aware of, is if your lovebird growls. This can indicate that they are discontented, angry or even scared. Usually, lovebirds are very vocal and their song is pleasant.

How Vocal Are Lovebirds?

Lovebirds, of both genders, use vocalisation for various different reasons. Typically, owners will find that their lovebirds vocalize through a range of squeaking, chirping, whistling and peeping sounds, as opposed to talking or singing.

This communication is highly common in lovebirds and some might consider them to be quite vocal. If you are looking for a quiet pet, birds don’t tend to be up there on the list of pets that don’t make a sound. Quite the opposite in fact.

Compared to other larger species of parrot, lovebirds are considered to be the quieter option. However, when compared to cockatiels or parrotlets for example, lovebirds hold their own in how much noise they make!

Their intelligence can make lovebirds quite attention seeking, lovebirds may vocalize to attract human attention and even interaction. Making sure that your lovebird has enough room in their enclosure and enough toys to play with (and destroy!) can help to quieten them down.

It is important to remember that vocalizations come naturally to lovebirds: it is part of their personality and a perfectly common behaviour! Shrieking and squawking at dusk and dawn are to be expected from your lovebird.

Other Sounds And Noises Lovebirds Make

However, there is not one set songbook when it comes to lovebirds, each bird is different and their noises and vocalisations can mean entirely different things. Some owners may find their bird makes a particular noise when they’re hungry, happy, playing or talking to another bird.

Noises your lovebird makes at different points during the day and whilst partaking in different activities can lead owners to being able to understand their lovebird better. The key is to listen to and observe your lovebirds behaviours at these different times, this way they will be able to used their vocalizations to be able to communicate with you.

It is common to hear your lovebird:

It is important to remember that growling or noises that sound like purring can indicate that your lovebird is feeling angry, frustrated, scared or annoyed. If they are making noises like this the best course of action is to determine the cause of this noise being made by your bird and either get rid of or minimise the issue.

Lovebirds are generally very active and energetic birds. Their vocalizations will often accompany their daily routine and can be an indicator of happiness and contentment. Enjoy the sounds made by your lovebird – they are their communications with you!

Whilst it is not common for lovebirds to talk, some lovebirds mimic human speech or sounds that are familiar to them. It is also not unheard of for lovebirds, who are exposed to a simple vocabulary from a young age to pick this up and vocalize the words from time to time.

It is more common however to hear your lovebird chattering and chirping, squawking and squeaking as their way of chattering to one another or with you!

The sounds made by your lovebird are perfectly normal and natural and certain sounds like shrieking and whistling are considered good indicators of your bird’s happiness.

Lovebirds do sing; it is a pleasant yet distinctive shrieking noise. Lovebirds will typically sing throughout the day, along with making other sounds like whistling. They generally do so when they hear noise and music, such as from outside or from the T.V or radio.

Lovebirds are known to be loud compared to other small parrots, but not as much as compared to larger birds. Generally, Lovebirds want to express themselves and communicate, and usually, the noises they make are high-pitched.

Wondering what other parrot species talk? Then check out my following guides: