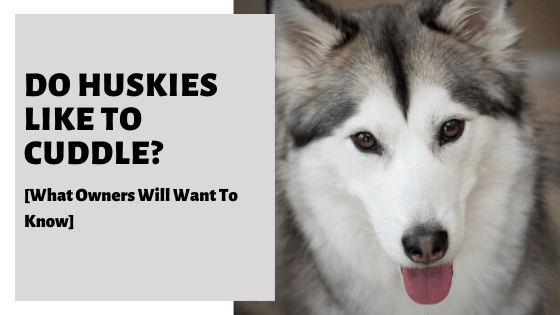 Huskies are a very loyal breed of dog, making great companions. However, due to their appearance and similarities with Wolves, its only natural to wonder whether they enjoy affection and like to cuddle with their owners. Having spent a lot of time around huskies, I would like to share with you what I have found:

So, do huskies like to cuddle? Huskies are generally known to be cuddly, affectionate dogs. They like belly rubs, being petted and hugged by their owners. However, not all Huskies are this way in temperament. Some are more independent and have preferences for being alone with minimal fuss and attention.

It really depends on your Huskie’s own unique personality. If your Husky is more naturally aloof, thankfully they can be trained to be more affectionate with you.

Huskies are generally known for their outgoing, gentle, friendly, and non-aggressive nature.

In many ways, they make a fantastic family pet; albeit they do need at least 60 minutes of exercise every day to prevent boredom.

There’s a reason why this is such a popular breed of dog; so let us now take a closer look at this breed’s propensity to being cuddled along with reasons why they may not want to do so.

Be sure to keep reading to the end as you’ll even find out exactly how to promote more cuddling if they are not as naturally inclined to do so.

Siberian Huskies are smart and can be independent, but they generally love being around people. They like being petted and hugged.

They especially like cuddling with their owners and family. They’re very social, happy to greet everyone they meet hoping they’ll get a belly rub out of the deal.

This is great news as cuddling up to a dog is a fantastic past-time. Plus, let’s not forget that they have a luscious coat that feels great to pet.

A huskies fondness for people does not actually come as much of a surprise when you take a look at their heritage and why they were initially bred, to begin with.

The breed actually dates back to the Chukchi tribe of northeast Asia over 3,000 years.

They were and have been used as working dogs for generations; working closely with humans and developing close associations.

These traits have been passed down and inherited ever since.

Even though Huskies are cuddly and loveable, they need a strong owner to lead them, otherwise, they’ll take over.

They need a firm, tender hand when training them starting when they’re a young pup.

Early positive training and socialization are therefore essential and this will ensure their focus is on people and you as their owners.

Generally speaking, these dogs enjoy human company and love to be occupied, even if it is just being with you or a family member.

How Do Huskies Show Affection?

Your Husky will show you affection by laying next to you, cuddling up to you and nudging your hand to pet them.

If you’ve raised your Husky from a young age, they will be devoted to you.

They also like to mouth your hand, gently holding onto your hand to show their affection.

This is a common thing for Huskies to do with other members of their pack as a way to show security in the group.

Other ways your Husky will show affection include

Huskies like to cuddle to keep warm, relieve stress, feel safe and to provide protection for their loved ones and families.

Huskies are typically very friendly dogs, they generally like everyone they meet. They like other animals if they’ve been raised with them or taught not to chase them.

It’s in their nature to enjoy playing with everyone they meet. Cuddling is of course an expression of affection and a way for them to express their emotions of love toward an individual.

It’s how they can help facilitate a bond with a human.

However, with this being said, they are not featured on the top ten list of affectionate dogs by the AKC (American Kernel Club).

In fact, some owners will say Huskies are more social than they are affectionate, but this again is likely due to individual differences and variances in the breed.

Hands down though, Huskies are affectionate toward their owners and their family members who they live with.

Just because there are other more affectionate dogs does not mean that huskies are not.

Let us now look at the main other reasons why a husky would want to cuddle with you, and other people:

All dogs, huskies included, will feel cold from time to time (even despite their thick double coat).

This can happen when they are sick, have been exposed to a draft, or have been outside.

Cuddling up is an easy way to get warm, quickly.

Again, it’s important to remember that huskies are initially from a very cold climate with extreme conditions.

This learned behavior will have likely been pivotal to serving such climates.

This is all part of dogs’ domestication to humans.

When a dog cuddles up with its owner, it actually lowers its stress levels.

Science Mag even published findings of a study confirming that cuddling releases the love hormone, Oxytocin, in both the dog and human alike.

A husky has spent thousands of years in a large pack of dogs, and their human owners.

Being close to others ensures safety in numbers. So cuddling can be a way your dog looks to feel safe.

It can happen when they sleep (for their own protection) or even when they feel uncomfortable in their environment.

Huskies are not known for their guarding tendencies, however, if they feel the need to protect you, they will get closer and naturally cuddle you.

The most likely reasons why a Husky may not like to cuddle include former mistreatment, injury, insufficient training/socialization, or even as a result of depression.

Siberian huskies are friendly dogs to pretty much any person they come into contact with, including kids.

They’re also friendly towards other dogs.

If they’ve been raised with other animals, they’ll even be friends with them too. They don’t bark much, but they will howl when provoked or protected.

With all this in mind, not all huskies will like to cuddle.

Some are more independent and stubborn and less affectionate in general.

There could be many reasons why your Husky does like to cuddle. Here are a few possible reasons:

If you got your husky later in their life (perhaps it was a rescue), it can result in a less affectionate dog.

They could have been mistreated or injured by their former owners.

This can cause them to be guarded and perhaps fearful of people.

Because Huskies are so social, they will still like people, but your pooch may be hesitant to allow you or others to hug them – especially until you have gained their trust.

Your husky may not have been properly socialized from a young age around people and animals.

Ineffective training methods and punishment can lead to a less affectionate dog.

Sometimes as Huskies age, they have less energy. They can’t show the same kind of affection or be as cuddly as they did when they were younger.

Yes, dogs get depressed. If you’ve recently started leaving the house more, this could cause your husky to respond by not wanting to cuddle with you.

Your husky could have an illness or be in pain.

Staying away may be a way to try and cover up or prevent the injury from being touched.

Some Huskies aren’t as cuddly and affectionate as others, but if your dog was cuddly, then suddenly stopped, it’s worth checking over them. This usually indicates something is wrong or has changed.

In this case, get your husky checked out by your vet to ensure they’re healthy.

If your Huskie isn’t overly affectionate, don’t worry.  Some dogs are more independent and stubborn. That’s just how they are.

They may seem aloof and not like to cuddle, but may actually show their affection in other ways. These include:

How To Get Your Husky To Like Cuddling More

So, if you’re sure your husky is healthy, you know that they have been trained properly and socialized well, and they’re still not cuddly, it could be that they’re not overly affectionate.

Fortunately, there are some things you can do to promote more affectionate behavior in them.

It will take consistent, patient training, but over time, your pooch will become more affectionate and cuddle with you.

Here are some of the best ways:

Be sure to reward any affection your Huskie shows you. If they let you pet or hug them longer than normal, then give them a treat.

If they act more cuddly than normal, give them a treat.

Pretty soon they’ll realize that being cuddly, and affection has its perks.

It may feel contrived on your part, but remember you’re training your husky just as you would train them in other things.

You can also get your husky to like cuddling more by NOT doing some things that put them off, such as:

Huskies are gentle, friendly dogs. They love humans and other animals, especially if they’ve been raised with animals.

Otherwise, they’ll chase animals, since they are prey-driven dogs.

If you own a husky, there is a good chance that they will want to cuddle with you.

They will share the sofa with you, curling up on your legs.

Your dog is also likely to follow you around the house waiting for you to come back and pet them or scratch their tummy again.

If your husky isn’t very cuddly, it could be due to poor socialization, being mistreated when they were young, or because they’re just not overly affectionate or display their emotions this way.

Thankfully, either way, you can train your husky to be more cuddly by rewarding any affection they show. Equally, initiating affection and cuddling with them tends to work well.

Over time, they will learn that affection has rewards.

Be consistent and patient with them, they will learn to be that cuddly, sweet husky you always wanted.