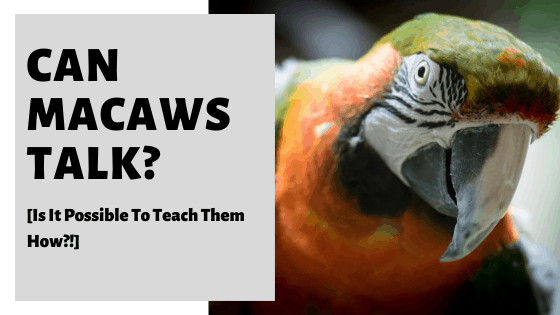 Some species of birds are celebrated for their ability to talk; there are countless videos of parakeets saying all kinds of interesting and peculiar things, for instance. But when it comes to macaws; do they share this capability? Will they naturally talk or do they need to be taught? Today, I will be sharing with you what the research has shown.

So, can macaws talk? Macaws are able to talk, and in fact, are known for their advanced speaking abilities. Macaws are intrinsically motivated to speak. They don’t need to be actively taught a new phrase; they can simply repeat what they hear. Although, it is still possible to train them to say certain words and phrases, with some repetition and consistency.

Not all people realize when looking at a potential pet bird, is that not all will be able to talk.

And this can be important, either way.

For some owners, the thought of a talking bird brings them a lot of joy. Besides, it can add to the companionship and be a source of entertainment.

For others, having a bird that talks may not be so much of a priority or may even be something to avoid altogether.

This is why it is so important that you research into each bird species ahead of time. First, to discover if they are capable, secondly to find out their tendencies.

But for the macaw; this bird is known for being quite vocal.

Let us now take a closer look into all that is involved with this exotic species of parrot when it comes to being vocal!

A Birds Ability To Talk

“Talking” is a complicated skill that we often use to characterize vocal patterns that resemble human speech.

The truth is most birds “talk” in terms of communicating with one another.

But, just as you wouldn’t expect a human to recreate a specific chirp, you can’t expect all birds to form words.

Although a certain level of cognitive ability is necessary to form words, there is also a physiological aspect to speech production.

Having the “right equipment” is a key component in speech. This means “talking birds” must have the right combination of vocal cords and mouth parts that allow them to achieve these noises.

Surprisingly, there are quite a few birds that meet this requirement.

While not every bird is able to do this, a lot of parrots are famous for it.

Macaws are one bird, in particular, that is more than capable.

This is more than just smoke and mirrors, as macaws can really speak!

Can You Teach A Macaw To Talk?

It is certainly possible to teach a macaw to talk, but it does take a consistent approach. Just like with communication in people, speech is a skill that must be learned.

Even birds that don’t “talk” in a manner that we would consider human speech, may still very well be engaging in highly complex communication.

Parrots will almost never be quiet animals. This is true of macaws, as they are of course, parrots after all.

As such, you should expect some screeching and squawking from your macaw the second you bring them home.

What you shouldn’t expect, however, is for them to come out of their eggs spewing human words!

Macaws are intelligent birds that take in all the information around them with excitement and eagerness. They are social animals highly influenced by everything around them.

They will, therefore, learn some words completely on their own that they are exposed to.

If you happen to use words a lot (or they just happen to stick with a phrase they like), your Macaw may be saying these words on repeat.

Just as a macaw can learn to expertly mimic your phone ringing or the chime of an alarm, they can learn phrases, songs, and sentences too!

Can you teach them to do these things? Yes!

If there is something special you want your Macaw to learn to say, there are ways for you to encourage them. While there is some technique to this, there is also a lot of “natural” skill involved.

Macaws are intrinsically motivated to speak. They don’t need to be actively taught a new phrase; they can simply repeat what they hear.

Much like a toddler learning how to repeat everything you say next to them, consider watching what you say in front of your macaw.

In fact, there are lots of horror stories where a macaw caught onto a profanity – choosing to repeat it at the most inappropriate of times.

While some people may find these antics funny, it’s not always appropriate and it does not reflect particularly well on you.

And macaws live a long life. If you did ever want to or need to put them up for adoption, this could be highly problematic!

Remember, this doesn’t just go for words that you or a family member may say.

Macaws can learn new words from any kind of audio. This includes songs you play on the radio or tv.

Does A Macaw Understand What It’s Saying?

Macaws are incredibly intelligent, but they are not on a level where they can speak “fluently” to you.

With some practice, you may be able to train your Macaw to associate certain objects or actions with a specific word, but it is much like teaching an animal to follow a command.

They’re very smart with an extra level of cognition to your typical fish or frog – but they won’t be able to have a full, conscious conversation with you in fluent language.

While they can learn to put certain words together, syntax eludes them.

If you are looking to teach your macaw how to talk, it’s a much easier task to focus on specific words or phrases you want them to know.

How Long Does It Take For A Macaw To Talk?

It can take anywhere from a few months to a few years for a macaw to start talking.

It’s very difficult to know how long you should expect to wait before your Macaw catches on. This is because it ranges greatly between birds.

Nevertheless, once you decide what you want to teach your Macaw, you are going to have to put some time and practice in!

Some factors to consider, which can impact this timeline, are:

Many owners report that their macaws don’t try to talk for quite some time.

Some people say that their macaws don’t talk for a couple of years, normally around two.

Considering the expected longevity of a macaw (around 80 years), they have a lot of time to get around to learning.

At the same time, some develop this skill faster than others.

Some words or phrases are more difficult to pick up on than others.

If you are trying to teach them to say something that is incredibly long or not very clear; it can be difficult and will naturally take longer.

While some people try to make their macaws listen to music directly to learn songs, a macaw may only take out the notes and learn to hum the tune.

Try to use a simple word in the beginning if your parrot is struggling.

Speaking takes a lot of effort and, while macaws are intrinsically motivated to communicate, they may choose not to try to speak.

This is a very personality dependent thing.

Some birds love to repeat everything you tell them, while others squawk nonsense for years.

Likewise, some will learn for the sheer satisfaction while others expect some sort of reward.

To give yourself the best chances of having a macaw willing to put in the time and energy to speak, you need to have a happy and healthy one.

The well-being of a pet is so much more than making sure their cages are clean and they are well fed.

There is a huge difference between having ten training sessions in an afternoon and ten over a year.

If you want them to learn a word, you have to do it often and consistently.

You can’t always expect your parrot to pick up on a word you hardly use with them.

If you are hardly interacting with your macaw, it’s possible they won’t like you very much.

If you want your Macaw to be comfortable enough to train with you, you should make sure to cultivate a healthy relationship with them.

Always socialize with them and treat them kindly. It goes without saying that you shouldn’t scream at or hurt your bird.

If they grow to fear you, they may not want to talk with you.

How Well Can Macaws Talk?

With practice, a macaw can talk pretty well. Compared to some other talking birds, like budgies, they have a pretty clear and concise way of talking once they are trained.

While they can mimic specific sounds with shocking accuracy, you should expect your macaw to always ‘sounds like a parrot’.

They have a distinct pitch that you will soon get used to. Or, you can always head to YouTube to get a better understanding before you decide to get one!

How Do You Teach A Macaw To Talk?

Teaching a macaw to talk requires a lot of patience and time.

Consider using these simple steps to bring your Macaw up to talking speed.

Once you decide on a word, stick with it. If this is the first thing you are trying to teach them, consider sticking to something short and simple like “hi” or “bye.”

Once they mastered that word – you can move onto a new one! Try to only work on one word or phrase at a time, so they don’t get confused.

This is just one of many reasons why they make such an exciting pet to own. They can provide a lot of fun and entertainment.

They’re great to interact with, and talking with them is a fantastic way to bond and strengthen your relationship with them.

There is a reason why the macaw is a popular bird species to own. Even despite their cost and long life which makes them so much of a commitment.

Nevertheless, with a little effort, time and patience, you too can enjoy the wonders of having your own speaking parrot!