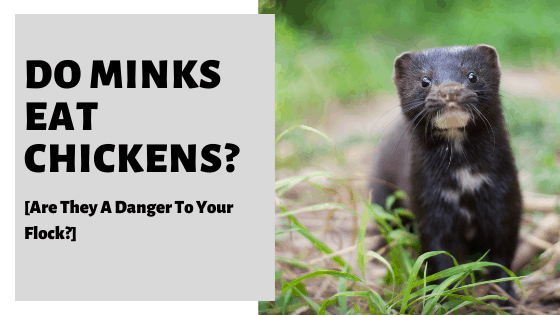 If you keep a flock of chickens and either live near water or have cited a mink, then naturally you may be wondering if they pose a danger to your birds. Are they a significant risk or are they less of a concern compared to other potential predators; such as foxes, badgers, and in some instances, Weasels. I spent some time researching this long-tailed wild mammal, and will be sharing with you all that I found here today.

So, do minks eat chickens? Minks do eat chickens, and will likely attempt to kill all in the flock if they are able to get access. Due to their high metabolisms, mink require a lot of food and regularly need to hunt. They usually kill at night, so you will need to make sure your flock are securely shut away.

There are two main different species of the mink; the American and the European. While they do differ in size with the America variant being larger, they share very similar characteristics and behaviors.

For example, minks typically live by bodies of water, and are excellent swimmers keen to enter the water as and when they need.

They are very territorial by nature, and two are rarely found in the same area except for during breeding season.

Let us now take a closer look at minks and how much of a threat they pose to your flock; including whether they will attack or even set out to kill them.

We will also be looking at some of the most important things to do to keep your chickens safe and secure from these opportunistic predators!

In fact, it is unlikely for a mink to stop at the eggs, and instead go for your birds.

Therefore if a chicken keeper notices that eggs are missing, but their birds do not appear to have been attacked, it is much more likely to be another predator, such as rats.

Mink do attack chickens; the main reason being as a means of acquiring food.

They are opportunistic eaters, meaning that they will mostly attempt to go after what is available to them in their environment.

Depending on where you live, the potential local supply of other foods, and the ease of access into your coop will largely dictate their desire to visit and to regularly return.

However, they are also willing to travel so this does not always mean that you are safe from a mink attack.

Minks possess a long and athletic body. They weigh as little as 1kg and typically only reach 6-cm in length; with 15cm of which being their tails.

As such they can squeeze easily through very small holes and attack a chicken somewhat easily.

While they are mostly active at night, they can attack at any time during the day.

Will A Mink Kill My Chickens?

Minks will not only kill your chickens if they gain access, but they will likely annihilate your entire flock.

Despite being relatively small, they are fast and nimble and can surprise chickens. Equally, they are able to pounce, quickly taking them by the throat.

While minks are likely to attack your entire flock, they will not eat every chicken that they prey on. In fact, they are mostly after the blood of their prey – which they drink for nourishment.

Mink are relentless; there is little that will deter them from their next meal.

There are even reports from owners whom have observed a mink attack, and been unable to stop it from shouting alone. Physically intervening is usually required to stop a mink if they get an opportunity at your chickens; they will not stop for anybody.

In fact, they will kill anything they perceive they can overpower, even if it is larger than themselves.

Mink have therefore been known to kill other birds too, such as waterfowl, as well as fish even directly from the water. Sometimes, they will leave the waters to look for rabbits.

How Do You Know If A Mink Has Killed Your Chickens?

With many predators that pose a threat to your birds, you may be wondering how to tell if a mink were to be responsible.

Minks, like weasels, kill in a very specific way. There are also some particular signs and traits to look out for.

As you can see, if a mink attacks your birds its not going to end well for them. Its also deeply upsetting and not the kind of thing you ever want to see.

How Do I Keep Minks Off My Chickens?

Keeping minks off of your chickens involves a lot of preparation, planning and ensuring that your birds are fully secure.

This is in many ways essential, not just for protecting your birds against mink, but for many other predators including badgers and weasels.

Your first priority is ensuring that you do not entice any mink onto your property.

One common area of neglect that can do this is leaving uneaten of spoilt food, and not cleaning regularly or sufficiently enough.

While it is true that only European mink commonly eat vegetables, both species are attracted by the smell that rotting food can have.

From there, it is a good practice to trim back or remove any bushes that are close to your birds. Minks and other predators can hide in them, which is something you want to avoid.

Equally, any piles of wood or areas in which they could conceal themselves should be removed.

Minks often hunt at night, so its essential that your birds are securely locked up during this time. Whether you have free-range birds or a run, either way it is a good idea to secure them in a hen house overnight. This will keep them out of sight!

As well as being very capable swimmers, minks are good climbers, very fast runners, are intelligent, can dig well and can squeeze through small holes. Are these make them a tough challenge to keep out.

For this reason, you must ensure that your coop is fully and entirely secure.

Every conceivable hole must be filled; whether that be a window, a ventilation hole or any other opening.

Using small-gauge welded hardware cloth is a must. Standard chicken wire will not do and can easily be overcome by predators’.

This is the kind of cloth you need to buy from Amazon; and it must cover all the most vulnerable places.

That could be a gap in the wall or in the roof. Be vigilant and check your coop over multiple times and regularly throughout the year.

As minks are also very capable diggers, you need to ensure that they cannot tunnel under (especially if your coop has a dirt floor).

This could mean adding additional fencing and/or sinking your fencing very deep into the ground (>20 inches).

Lastly, minks are known to explore rabbit warrens. So you must be sure to stop and prevent rabbit burrows on your lawn and where you can just outside of your property.

Repellents work by increasing the perceived risk to the mink, or making it too much of a challenge that they feel they cannot overcome.

Perhaps the two best examples that chicken keepers commonly use are

Both or either work well; with motion activated sprinklers being the more humane of the two.

Either way, this is all about making it more difficult for a mink or other predator to be able to get access to your property.

Minks pose a real and significant threat to chickens. Unfortunately, they are very nimble, capable and opportunistic – making them very difficult to protect against.

They do kill and eat chickens; and they do so in the most heartbreaking of ways.

That being said, so long as you do your research, your due diligence and invest in the right materials, there is no reason why you cannot keep them far away from your birds.

One final thing to consider is that trapping minks is generally not advised.

First and foremost, there are several different laws that protect minks, but also prevent you from being able to release them into the wild.

Beyond this, minks can carry diseases and pose a risk if you were to try to handle them.

For these reasons, if you suspect that you have a local mink that is posing a significant threat to your birds; you may want to consider contacting your local authorities for further assitance and advice.