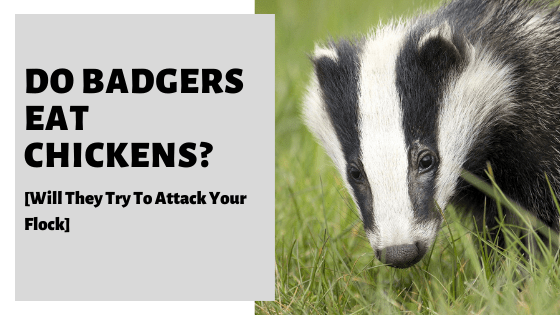 If you know that you have a local population and sett (group) of badgers in your area, then you may have some concerns about the well-being, comfort and security of your chickens. But do badgers eat chickens if given the chance, or will they go out of their way to attack them? Aware that we have this predator nearby, I decided to spend some time researching them and if they pose a threat to our beloved flock.

So, do badgers eat chickens? Badgers do eat chickens, and will do so if presented the opportunity. Badgers are also creatures of habit, so one that has successfully found food will return for more. Badgers are nocturnal so are most likely to go after your chickens during the night.

There are many different species of badger, such as the American Badger and the European badger, all of which differ in appearance and size.

However, they all share similar traits and commonly possess a short wide body, and short legs that they know how to use! Badgers are excellent diggers, which is perhaps the biggest challenge you face as a chicken owner.

Let us now take a closer look at badgers in relation to chickens; including whether they would attack or even proactively try to kill your birds.

We will also be looking at some practical and proactive things you can do to help secure your birds and keep them out of the sights of these skillful and strong predators!

Badgers do attack chickens; primarily as a means of acquiring food.

As opportunistic feeders, they look for any opportunity to find a regular source of nutrition.

In fact, they are known to return each and every night if their efforts are rewarded and they know that they will be able to be fed.

Unfortunately, your flock can be decimated if you are not careful, they are able to acquire access and you do not undertake the required measures to keep them away.

Some owners have even reported that badgers who were able to get into their coop have eaten several chickens before falling asleep!

Learn How To Keep Chickens – The Right Way

With our instantly downloadable eBook!

Ready to learn how to raise and care for a flock with confidence?

Our guide will show you how. Get it now while it’s still on sale ⬇️

Badgers do kill chickens, and they are a strong and fearsome killer of these birds. They possess sharp claws, strong jaws, and formidable strength leaving your chickens with little chance of survival if they were to cross one’s path.

This is no real surprise when you consider their respective sizes. The average badger weighs in at 17kg, compared to the <1kg average weight of a hen.

Unfortunately, badgers will not stop at the first chicken that they are able to kill. They are known to go into a frenzy, killing all of the birds that they can get access to.

As a chicken keeper, this of course is deeply upsetting, shocking and one of the worst discoveries to make in the morning.

Therefore, keeping badgers away and protecting your flock is essential. We will look at both approaches in the following sections.

How Do Yo Keep Badgers Away From Chickens?

Keeping badgers away from your chickens is your first line of defense. In fact, badgers are very difficult to secure against once they have successfully broken into your coop and acquired their food.

Although less agile than foxes and some other types of predators that you may have nearby, badgers are surprisingly good at climbing.

It is their digging however, in where they are most capable.

For this reason, keeping badgers away from chickens is mostly about keeping your chickens secure and enclosed. This is particularly true during the night.

Your first priority is ensuring that your chicken coop is sturdy, and can withstand the attack of a large, somewhat heavy, and hungry animal.

Badgers have been known to rip off doors and even entire wood panels to get at chickens so you need to only use the strongest of materials. We will explore this further below.

Outside of securing your housing, perhaps the most significant other action you can take is to keep the coop clean and take away any spoilt or uneaten food as soon as possible.

This is as much about keeping your property free from any enticing smells which can attract a whole host of predators to your birds; putting their life in threat.

Another potential option is doing your research and due diligence about some of those external organizations you can consult.

Whether it is a local authority or council, a badger conservation group, or a wildlife trust.

Often these groups can offer you impartial advice on how to approach badgers and some of the things you can do to prevent or reduce them from returning to your property.

In some cases, if a set of badgers exceeds a healthy local population size these organizations may be able to intervene and step in to help rehome them safely and humanely elsewhere.

How Do I Protect My Chickens From Badgers?

Badgers, along with foxes, have incredibly strong jaws and teeth. They can bite through flimsy wood, even some types of wire.

You should check for any weak spots, particularly around the doors and nest boxes.

Fixings, hinges, and bolts must be secure and robust. Bolts in particular can be swiveled by some predators, such as foxes which all commonly reside in similar areas to those of badgers.

Therefore, you may want to consider adding padlocks to fully secure the cage. In fact, this is a good idea to keep human predators away from your flock and your eggs!

Any windows or ventilation holes should be fully covered with secure, small-gauge welded mesh; as this is another potential entrance that predators may seek out to get into your coop.

If your setup includes a run, then you must ensure that it is constructed with strong wire mesh (not wire!) It needs to be solidly supported, and a roof to prevent badgers and other predators from climbing in.

Foxes, weasels, possums, rats, and snakes are all other predators that you need to be aware of, especially depending on your location and what is local to you.

In some cases, and if you live near bodies of water, then minks could be a particular concern.

For the badger, who is a very capable and strong digger, you’ll also need to lay a wire skirt horizontally around the bottom of the run.

You’ll also want to sink your fence at least 20 inches into the ground or consider placing concrete slabs around the perimeter of your coop.

This will make it increasingly difficult for them to burrow underneath.

Unfortunately, many predators are patient and resourceful – not limiting their attacks purely to the daytime.

For badgers, however, you are most likely to experience an attack during the night, which is when they are most active and on the search for food.

While it is true that any fence is completely predator-proof; regular checks for weak spots and damage is going to be required, as is looking for any holes dug around the coop.

For additional security, the electrified wire can be installed and this can work wonders for troublesome predators that need a bit more of a reason to lay off.

Badgers do unfortunately kill and eat chickens. Despite being a relatively cute creatures, they are fearsome and strong, with sharp claws and a powerful jaw. They are fully capable of taking out your entire flock.

Added this to their ability to climb, dig and breakthrough certain materials – it comes as no surprise that you need to be proactive and take these wild scavengers seriously.

In fact, you should not just be considering any local sett of badgers. These are just one of your concerns.

There are a number of other equally dangerous and problematic predators to consider if you keep chickens. Many of which can gain access through surprisingly small holes.

Worse still, it has even been reported for chickens to lose their heads simply by sticking their heads out when a predator comes to visit.

Therefore, securing your chickens and not providing any incentives for predators are perhaps the most fundamental things to do if you keep chickens.

It’s even more important depending on where you live and the types, amounts, and nature of the predators that reside there.

Before we finish up, one final thing to consider is that badgers are a protected species in many parts of the world.

For this reason, attempting to kill them is often against the law and can get you into trouble. Plus, it’s not a nice thing to do not something that you should even need to do.

Plus trapping them does not come without its dangers as badgers will attack if provoked and as a last resort.

For these reasons, if you suspect that you have a sett of badgers in your area and you are concerned that the population is getting out of hand or they are posing a sustained and serious threat to your birds despite your best efforts; it’s a good idea to contact your local badger conservation group for assistance and advice.

Wondering what other animals and predators pose a threat to your flock? Then my following guides may be of interest: