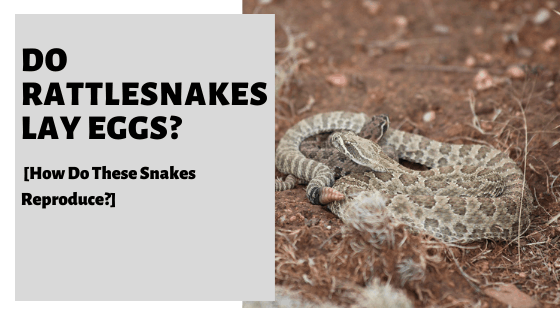 Rattlesnakes are notorious for their tails; the crucial organ that warns predators and distracts prey. But one less known aspect of these reptiles is how they reproduce. Do they lay eggs like most other species of reptiles or are they part of the rare group that do not? Here is what you need to know!

So, do Rattlesnakes lay eggs? Rattlesnakes do not lay eggs. While they produce eggs, female rattlesnakes will instead carry them inside for up to 90 days. These eggs will then hatch while still inside her, and she will give birth to live young. Rattlesnakes only reproduce once every 2-3 years.

This is the scientific term that simply means:

‘(of an animal) producing young by means of eggs which are hatched within the body of the parent, as in some snakes.’

So if you see this term ovoviviparous, now you know what it means.

And the rattlesnake is part of this exclusive group of snakes that does so.

Let us now take a closer look at the reproduction process in these snakes before looking more closely at the birthing process.

So stick around; you’ll learn something for sure!

How Do Rattlesnakes Reproduce?

Rattlesnakes reproduce through live birth; where eggs that have been fertilized by a male will hatch within the female.

And the process of reproduction all begins with the female.

During mating season, she will produce eggs in her ovaries, which will then pass through into her oviducts ready for fertilization.

She will then release a small amount of sex pheromones to attract a mate.

Males will pick up on this scent, and follow it accordingly using their tongues and Jacobson’s organ.

They’ll follow her for days; doing all they can to entice her into mating. Rubbing and brushing against her is a common way to do so.

If they successfully do so; they’ll use their hemipenes (a sexual organ) located on the base of the tail. This will inject their semen into the female.

She’ll not utilize it right away.

Instead, storing it for months until they are ready to reproduce.

When ready, the sperm will fertilize the eggs and the rattlesnake will become ‘pregnant’.

She’ll then proceed to carry the fertilized eggs for up to 90 days.

These eggs will later hatch and she will give birth to her live young.

What Time Of Year Do Rattlesnakes Give Birth?

Rattlesnakes will typically give birth during the late summer, or early fall. This is around 3 months after mating.

Therefore, the mating season in rattlesnakes typically occurs in the spring, which is just around the time that a rattlesnake will come out of hibernation.

However, it does depend on the species of rattlesnake and the geographic location.

Some rattlesnakes have been known to mate much later, in the fall. For these species, they will actually store the sperm away for much longer (over the winter period and through hibernation). They will then fertilize their eggs during that next spring.

Either way, rattlesnakes as a species will only give birth one every 2 years.

How Many Babies Does A Rattlesnake Have At Once?

A rattlesnake will only typically birth between 4-10 live hatchlings at once. This is from around 20-25 fertilized eggs that a female will carry.

In other words, between 15-40% of a rattlesnakes eggs will successfully hatch.

How Do Rattlesnakes Give Birth?

When a female rattlesnake and her babies are ready, she will gently retreat to a comfortable, warm and safe birthing den and birth her live rattlesnakes.

These baby rattlesnakes will be born wrapped in a membrane that helps to keep them safe.

The baby rattlesnakes, which there will be between 4-10 off, will quickly break free of the membrane and begin moving toward the mother.

They will be quite well-developed by this point, being around 10 inches in length, and generally quite independent.

Nevertheless, they will be immensely vulnerable during this time – particularly to other predators.

For instance, they will only have one rattle at this time and this organ will only develop in time as they grow.

How Long Do Baby Rattlesnakes Stay With Their Mother?

Baby rattlesnakes will only typically stay with their mothers for between 7-10 days. While they remain close, the mother will not provide any care for her young.

For instance, she will not acquire food for her offspring, they instead will need to obtain the nutrition they need.

Otherwise, they will succumb to hunger.

Baby rattlesnakes will generally start to depart their mothers after their first shed; this is around a week after their births.

At this juncture, they’ll then go off on their own to fend entirely for themselves.

But due to their vulnerability, may baby rattlesnakes are unable to survive.

Besides, it’s not only predators they need to overcome; there is a harsh winter to get through as well.

If they can manage to get through the first year, they have a much greater chance of survival long term.

Rattlesnakes are solitary, and they will only come together during the mating season.

Female rattlesnakes do not lay eggs, but they do produce them.

And they will also carry them around; both unfertilized and then fertilized for quite some time.

But when it is time to reproduce, they will give birth to live rattlesnakes.

And they’ll be quite large too.

Of course, this is very different from many other species of snakes. Cobras, Gophersnakes, and Kingsnakes being such examples; all of which do lay eggs.

Rattlesnake eggs look like most other types of snake eggs; small with a white outer shell. However, these eggs are rarely if ever seen in tact. As rattlesnakes give live birth, their eggs are broken inside them. It may well be that broken shells or remnants are released or dispersed during birth. However, these will be small fragments that do not resemble the shape or structure of an egg.

How Poisonous Are Baby Rattlesnakes?

Baby rattlesnakes are not poisonous, nor are adult rattlesnakes. Instead, they are venomous and can/do inject venom through the small fangs with which they are born with.