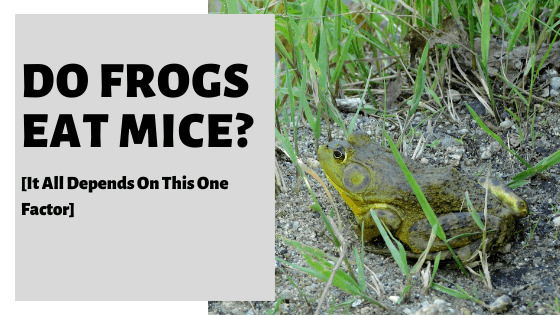 Frogs are opportunistic feeders, consuming a wide variety of different foods and anything that comes their way. Being primarily carnivorous by nature, this can include but is not limited to small insects, snails, and worms. But what about mice? Would a frog attempt to eat prey of this size? Here is what you will want to know.

So, do frogs eat mice? Not all frog species will eat mice, but the larger species do – if given the opportunity. The Pacman and Bullfrog are two such species that have been known to. Frogs that eat mice will swallow them whole, typically after holding them in their mouths and suffocating them first.

But that is how frogs typically will eat their food.

And why would it be any different with mice?

A slow and somewhat painful death.

But a frog needs to eat, and this is the safest way for them to do so!

Let us now take a closer look at whether all frogs can or will eat mice and all the considerations regarding this potential food source.

Some species of frogs can eat mice, but not all of them can or will. It generally depends on the size of the frog and if they perceive they can safely consume this larger prey.

In regards to the food itself; a mice would tick all the boxes.

Frogs are carnivorous, after all, outside of a few omnivorous species.

Even then, these amphibians do best with meat in the diet.

And it can come in many different forms. From snails, slugs, worms, flies and moths. Generally, anything similar like this that comes their way.

But if a mouse were to venture into their path.

Well, how a frog will respond will depend on the species and size of the frog.

It’s a matter of risk and danger vs. reward, after all.

Nevertheless, certain species of frogs cannot nor will not eat mice.

What Kind Of Frogs Eat Mice?

Larger species of frogs will eat mice. The main ones to note are Pacman frogs, African bullfrogs, and larger Green/Grey Tree frogs.

And these larger species will not stop at mice either; also consuming other smaller rodents, reptiles, birds, fish, and other amphibians.

If they think they can safely consume it, they’ll take it on.

In the wild, what a frog eats is mainly dependent on what comes it’s way. It’s also a matter of what will satisfy them and provide them the nourishment they need.

Mice are quick but not too quick for the larger, more illustrious frog.

And in captivity, certain larger species of frogs can be fed mice too.

But it should all begin with small, newborn mice (otherwise known as pinkies), and these should be introduced to your frog early on.

Pinkies can typically be found frozen or live, but it’s essential that only live mice are fed.

Otherwise, a frog will likely not even attempt to eat them.

The largest frog species will even eat adult mice.

There is one caveat for feeding mice, or to frogs eating mice in general.

The mouse should not be wider than the frogs head.

Otherwise, the frogs’ intestines’ can become impacted – which can result in death.

Frogs are likely to know instinctively what they can and cannot eat. But there is always the risk they take on more than they can handle.

Especially in captivity when they are reliant on the food you offer!

What Kind Of Frogs Do Not Eat Mice?

Most frog species will not eat mice as mice will be too large for them to digest safely. So the typical common frog, red-eyed frog, and dart frog cannot.

Instead, these species will stick primarily to much smaller prey – with crickets, grasshoppers, worms, flies, moths, roaches and mealworms being more suitable options.

Why Do Frogs Eat Mice?

Some species of frogs will eat mice as they offer a lot of sustenance. Mice provide a lot of energy and nutrition, particularly compared to smaller insects.

Frogs are not particularly fussy when it comes to their diet; and will eat any animal so long as it fits into their mouths.

While mice are generally harder to catch and more dangerous, for a larger species of frogs, it’s a matter of risk vs. reward.

A successful catch of a mouse would fulfill a lot of their nutritional requirements. In order to obtain the same amount of nutrition, it could be hundreds or thousands of smaller insects.

So, it’s all about opportunity and the best foods available. Those that are safe, of course.

How Do Frogs Eat Mice?

Larger species of frogs will consume mice whole. On occasion, a frog will swallow a mouse right away, but most of the time, they will hold the mouse in their mouth to kill it first.

For the latter, a frog will bite onto the mouse and hold them in position until they stop struggling.

Unless the mouse manages to escape, the frog will suffocate the mouse or kill them from the internal injuries brought about by the crushing.

And they typically do this to keep themselves safe.

Otherwise, there is always the risk of the mouse fighting back inside the frog; causing them injuries, or worse.

Can A Frog Eat A Rat?

Some larger species of frog, particularly the Bullfrog, have been known to eat rats. Although, rats will generally be too large and dangerous for most frogs.

That being said, many of the larger frog species will still be able to eat a young rat pup.

Ultimately, Bullfrogs are pretty much in their own category.

Their ferocious hunters; they lunge opened mouth at almost any unsuspecting prey. And they have mighty and robust jaws and great jumping abilities to support their efforts.

It comes as no surprise that a rat is an opportunity for this particular species. Besides, some have been known to measure up to 8 inches from snout to vent and weigh as much as 800 g (1.8 lbs).

No surprise a rat is a viable option for these frogs in particular.

It’s definitely the exception rather than the norm, mind.

Frogs may be able to eat mice.

In terms of dietary preferences; a frog would have no hesitation. Besides, the diet of a frog is extensive, to say the least.

But what appears to really matter, and the deciding factor on whether a frog will eat a mouse is if they inherently perceive they can.

Are they able to safely overcome them?

Can they swallow them whole?

Larger species know they can, and for the Bullfrog in particular – well, there are many small animals out there at risk!