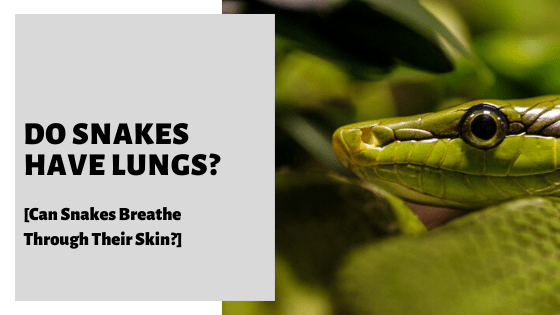 Pet snakes are unique in many ways, but they share similar body parts to other animals and us humans. But what about the lungs? Do snakes have these and use them to breathe? After doing some research, I’ve learned how these serpents acquire the oxygen that they need. I’d like to share this information with you here today.

So, do snakes have lungs? Snakes do have lungs. The majority of snake species only have one lung whereas some species do have two lungs. Snakes do not have a diaphragm, but rather, contract and expand muscles in between their ribs to breathe and obtain the oxygen they need.

Snakes, being the unique creatures they are, have a unique respiratory system to match.

Snakes do not have a diaphragm (the sizeable soft muscle used for inhaling and exhaling) but breathe by contracting the muscles between their ribs.

Let us now take a closer look at how snakes use their lungs and how they breathe in general.

Keep reading as you’ll even learn how some species of snake use their skin to breathe!

Do Snakes Breathe Through Lungs?

Snakes have lungs but draw breath through their nostrils. They even have a particular organ called a glottis, which allows them to breathe as they eat.

When we look at snakes, it’s a wonder how they manage to fit lungs into their long, slender bodies.

As such, we can only imagine the snake’s breathing process to be complicated and mysterious.

The internal structure of the lungs is not all that different from humans, yet they are more stretched out.

Some snakes have two lungs, whereas others have just one.

Their lungs operate similarly to humans. Their ribcage expands when they draw air in, and contracts when they push air out.

As previously stated, snakes do not have a diaphragm, but rather, contract and expand muscles in between their ribs to breathe.

As snakes breathe in through their nostrils, the air comes into the windpipe, before moving down to the glottis.

When a snake’s mouth is closed, the glottis connects with the opening that comes down from the nasal cavity.

In other words, air flows directly through the nostrils, into the nasal cavity, through the glottis, and then to the lung/lungs.

What does their involvement in the breathing process of a snake look like?

Let’s delve more into snakes lungs in the following section.

Most snakes have one functioning lung comprised of two parts that span the length of the snake.

The part that is closest to the snake’s head has a respiratory function; this is where the exchange of oxygen takes place.

The part of the lung near the snake’s tail acts as an air sac. The interior of the sac resembles more of a balloon than a lung. Snakes do not exchange respiratory gasses.

In those snakes with two lungs, it is the right one that functions, whereas the left one shrinks until it becomes a vestigial remainder.

Regardless of whether the species of snake has one or two lungs; they will operate in the same way. The top of the functioning lung, nearest the snake’s head, has small pockets that are filled with air (just like what occurs with humans).

Oxygen from that air is passed into the snake’s bloodstream. When the snakes exhale, waste chemicals from the blood are expelled into the air.

The lower part of a snake’s lung acts as a tiny air sac that stores air that the snake might need later on.

This air sac allows snakes to spend long periods underwater. It is as if they have an in-built air tank.

In snakes that swim, this part of the lung extends down to their cloacas, and it has very dense sides.

This helps sea snakes to hold their breaths for even more extended periods.

Can Snakes Breathe Through Their Skin?

Only a small number of sea snakes can breathe through their skin, albeit only a little.

These sea snakes use a process called ‘cutaneous respiration‘ to breathe through their skin; however, these snakes are primarily air-breathing serpents like all other snakes.

So how exactly does cutaneous respiration work, let’s explore this process in detail.

Snakes covered in scales make breathing through their skin look impossible; yet, these snakes can transport blood via their lungs to the capillaries in their skin while submerged in water.

Blood carries waste products to the snake’s skin, where it is dispersed into the water around them. The blood turns their skin pink, so you can tell when this process occurs.

At the same time, the snake absorbs oxygen from the surrounding water.

Oxygen from the water is drawn up into the capillaries of their skin and taken into the blood.

This method helps the snake stay underwater for longer. Research has shown that sea snakes can absorb 30% of the oxygen they require in this manner.

These sea snakes have a significant advantage as they stand much less chance of drowning, and they don’t need to resurface for air all the time.

This process only applies to certain sea snakes; regular snakes do not breathe through their skin but rely solely on normal respiration.

Respiratory infections occur when bacteria or a virus infects the snake’s mouth, throat, or lungs and make breathing a challenge for snakes. Infections include:

These signs are a clear indication of a Respiratory Infection (RI).

RI’s are easily remedied and usually caused by poor living conditions such as an enclosure that is too cold, dirty, or too stuffy.

If you see any of the symptoms of infection, take your snake to a vet immediately. They will be able to help restore your snake back to its full health and advise you on the best care plan for your snake.

Usually, this will involve cleaning out the enclosure and ensuring that your snake has everything it needs.

You may need to purchase some equipment to control and monitor the humidity if you have not yet already.

Snakes have lungs, but it depends on the species as to how many they have.

It’s hard to imagine these captivating reptiles as having lungs.

Their respiratory system is curious and certainly makes for a fascinating topic, who could imagine that the way snakes breathe differs only slightly from humans.

It’s advantageous to know how a healthy snake should breathe as opposed to one with an infection.

Knowing the signs of respiratory disease in a snake helps owners better understand and take care of their pets.

It also helps to be aware of any potential issues early on, and get them the medical care they need before the infection can take hold.

Here are some other interesting guides on snakes you may be interested in: